Half of Karabakh population displaced as Putin says ‘tragedy’ must end 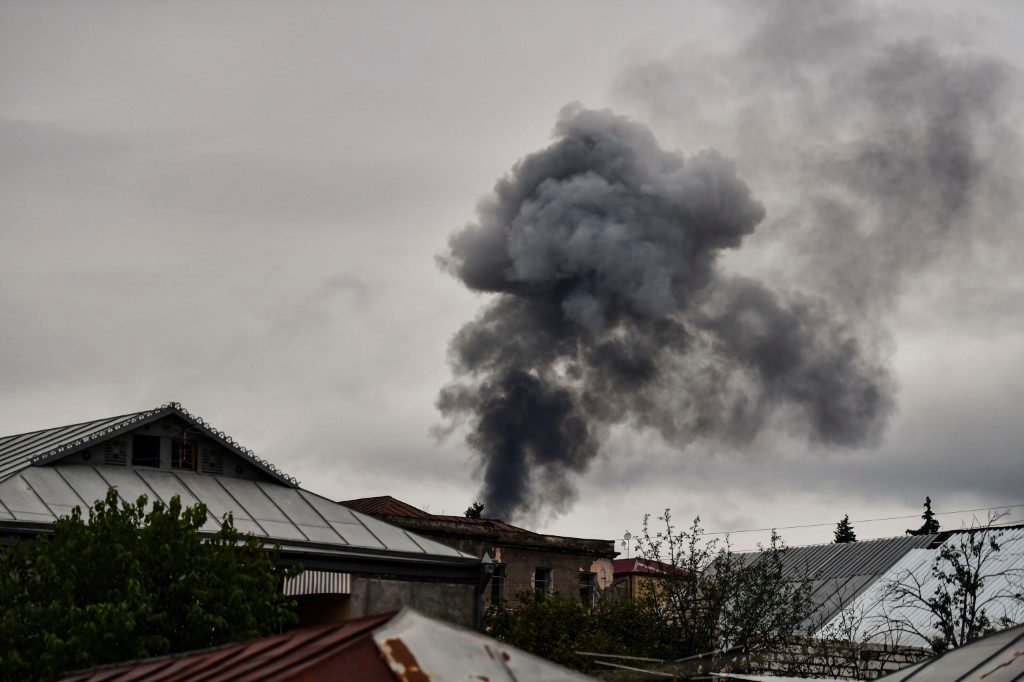 Smoke rises behind houses after shelling in the breakaway Nagorno-Karabakh region's main city of Stepanakert on October 7, 2020, during the ongoing fighting between Armenia and Azerbaijan over the disputed region. (Photo by ARIS MESSINIS / AFP)

Facebook Twitter Copy URL
Copied
Much of Stepanakert's 50,000-strong population has left, with those remaining hunkering down in cellars

Clashes between Armenian and Azerbaijani forces have displaced half of the population of the breakaway Nagorno-Karabakh region, an official said Wednesday, October 7, as Russian President Vladimir Putin urged an end to a “tragedy” that shows no sign of abating.

The fighting in one of the most combustible frozen conflicts left over after the fall of the Soviet Union erupted on September 27, with Azerbaijan insisting the Armemian-held region must return to Baku’s control.

The conflict has gained an international dimension that has alarmed the West, with Turkey supporting Azerbaijan and Armenia hoping that Moscow, which has so far stayed on the sidelines, could step in.

“Of course this is a huge tragedy. People are dying, there are heavy losses on both sides,” Putin said during an interview with state-run television.

Even if the longstanding conflict could not be resolved, a ceasefire must be agreed “as quickly as possible,” added Putin, who earlier held his first telephone talks with Azerbaijani President Ilham Aliyev since the latest fighting began.

Much of Stepanakert’s 50,000-strong population has left, with those remaining hunkering down in cellars.

They were disturbed by air raid sirens throughout the night as multiple explosions went off in a city plunged into total darkness.

The city was hit by new strikes in the morning, with smoke visible and buzzing indicating the source was a drone, an Agence France-Presse (AFP) correspondent said.

“According to our preliminary estimates, some 50% of Karabakh’s population and 90% of women and children – or some 70,000-75,000 people – have been displaced,” Karabakh rights ombudsman Artak Beglaryan told AFP Wednesday.

Azerbaijan has accused Armenian forces of shelling civilian targets in urban areas, including its second-largest city of Ganja.

Prosecutors spokeswoman Gunay Salimzade said the 427 dwellings populated by some 1,200 people had been destroyed since the start of the current conflict.

Nagorno-Karabakh broke away from Baku in a 1990s war that claimed the lives of some 30,000 people. The Armenian separatists declared independence.

Nagorno-Karabakh’s 140,000 inhabitants are now almost exclusively Armenians after the remaining Azerbaijanis left in the 1990s war.

It remains acknowledged by the international community as part of Azerbaijan and no state, including Armenia itself, recognizes its independence.

Sporadic fighting has erupted frequently since a May 1994 ceasefire, most notably in 2016 in an eruption many saw as a brief war.

But analysts say that a game-changing element this time is the wholehearted involvement of Turkey, which has reportedly sent pro-Ankara Syrian fighters to boost Azerbaijan and also home-produced drones that have already been deployed with success in Libya and Syria.

‘Does not extend to Karabakh’

According to the Syrian Observatory for Human Rights, 1,200 fighters have been sent by Turkey and at least 64 have already died.

But Turkish Foreign Minister Mevlut Cavusoglu said Tuesday the world should back Azerbaijan as the “side of those who are right,” describing Armenia as the “occupier.”

Ex-Soviet master Russia has so far kept its distance in the conflict as other troubles mount, such as protests in neighboring Belarus, the poisoning of opposition figure Alexei Navalny and now unrest in Kyrgyzstan.

It has cordial relations and arms cooperation with both sides. But it has a military base in Armenia and Yerevan is a member of a Russia-led regional security group while Baku is not.

Pashinyan told AFP he was confident Russia would come to its aid due to the two countries’ membership in the Collective Security Treaty Organization military alliance (CSTO).

Putin in his interview emphasized that Moscow would fulfill its obligations within the CSTO, which analysts sometimes describe as a Russian NATO.

But pointedly, he noted: “The hostilities, which to our great regret, continue to this day, are not taking place on the territory of Armenia.”

Kremlin spokesman Dmitry Peskov was even more explicit saying Russia’s obligations under the CSTO “do not extend to Karabakh.”

But he also sounded a note of alarm over the presence of Syrian fighters, saying this posed a “great danger and is a reason for the deep concern of Russia.” – Rappler.com