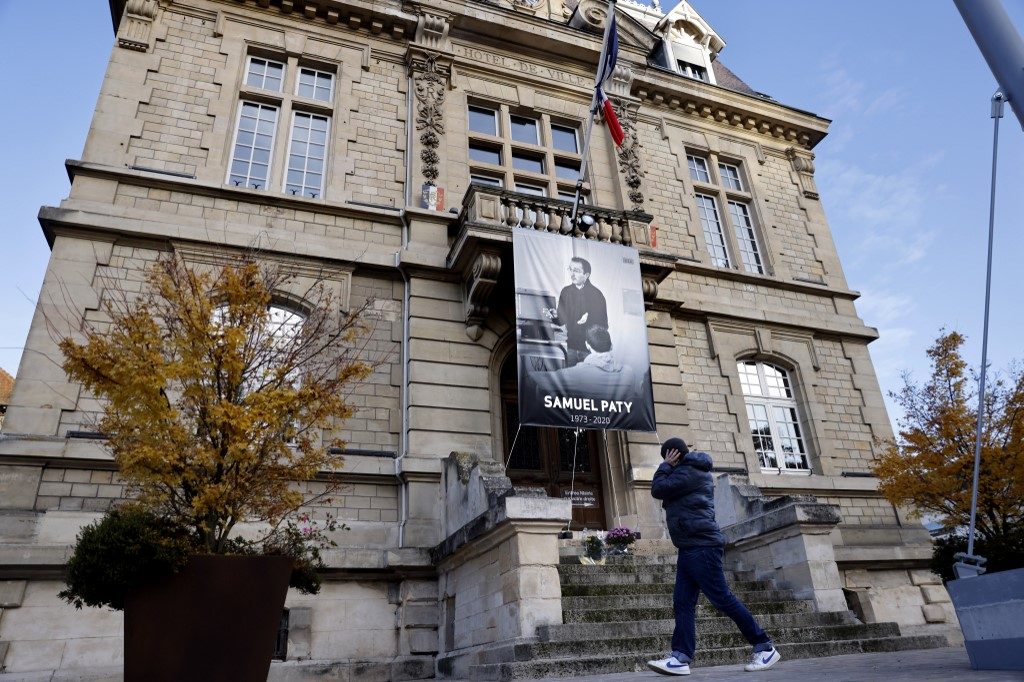 REMEMBERING SAMUEL PATY. A pedestrian walks past a poster depicting French teacher Samuel Paty placed on the facade of the city hall in Conflans-Sainte-Honorine, 30 kilometers northwest of Paris, on November 3, 2020.

Facebook Twitter Copy URL
Copied
Three of the 4 students charged are suspected of identifying Samuel Paty to his killer, 18-year-old Abdullakh Anzorov, who then tracked him down and beheaded him in a street near his school

Four teenage students have been charged in France over the killing of Samuel Paty, including 3 for allegedly pointing out the teacher to his murderer, a judical source said Thursday, November 26.

Three other pupils were charged with complicity earlier this month over the beheading last month of Paty, who had shown his students cartoons of the Prophet Mohammed as part of a lesson on free speech.

Paty’s murder sparked a torrent of outrage that prompted President Emmanuel Macron to crack down on Islamist extremism and violence in a country reeling from a wave of jihadist attacks since 2015 that have killed more than 250 people.

Three of the 4 students charged Thursday were suspected of identifying Paty to his killer, 18-year-old Abdullakh Anzorov, who then tracked him down and beheaded him in a street near his school.

Anzorov, who was killed by police at the scene of the beheading, paid the students a few hundred euros for their help.

The three, who are between 13 and 14 years old, are being charged with “complicity in a terrorist murder,” the source said.

The fourth is the daughter of Brahim Chnina, who launched a virulent online campaign against Paty denouncing the teacher’s use of the cartoons published by satirical weekly Charlie Hebdo.

Chnina himself – as well as Islamist militant Abdelhakim Sefrioui, who ran the campaign together with him – have already been charged with complicity.

His daughter is accused of “slanderous denunciation” of Paty after relating her version of events in the classroom, though she did not actually attend his civics lesson.

Father and daughter reported Paty to police for “discrimination” just over a week before the murder, alleging that he had singled out Muslim students by asking them to leave the room before showing the cartoons.

Other witnesses have reported that Paty only said students were free to leave the room if they did not want to see the cartoons, one of which showed the prophet without any clothes.

All 4 teenagers were briefly detained earlier this week at the request of anti-terror investigators, the source said, and freed under judicial supervision.

The charges take the total number of people investigated over the murder to 14. – Rappler.com