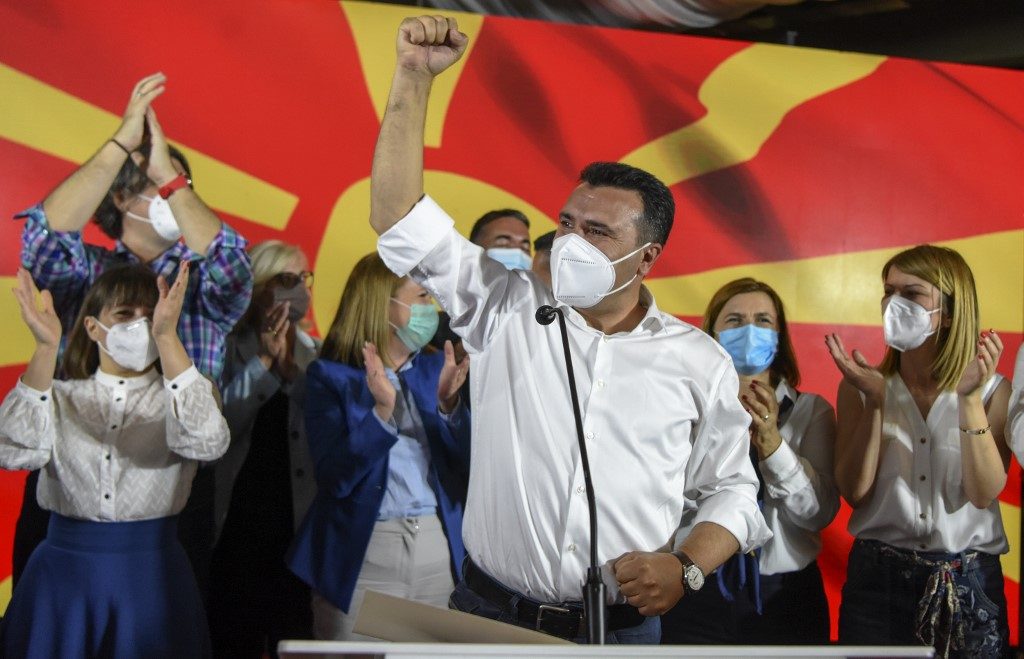 Facebook Twitter Copy URL
Copied
Lacking an outright majority with some 36% of the vote, the center-left Social Democrats will now face tough coalition talks that could drag on for weeks before a government is formed

The Wednesday, July 15, vote was the first parliamentary election since the Social Democrats added “North” to the Balkan country’s name last year – a move that ended a decades-old dispute with Greece but was highly controversial at home.

The historic accord ushered the country into NATO and opened the door to future EU membership.

But critics are still bitter about conceding a part of their identity to appease Athens, which was blocking the EU path because it claimed exclusive rights to the name Macedonia for its own neighboring region.

Lacking an outright majority with some 36% of the vote, the center-left Social Democrats will now face tough coalition talks that could drag on for weeks before a government is formed.

That could mean a leadership void at a time when coronavirus infections are surging and the country’s already weak economy is headed towards a pandemic-triggered recession.

According to projections by the state election commission, the Social Democrats are in line for 46 seats in the 120-member assembly, followed by 44 from their right-wing rivals VMRO-DPMNE, though the numbers are still subject to change.

If Social Democrat leader and former prime minister Zoran Zaev fails to muster the necessary alliances, VMRO-DPMNE would be allowed to try.

The party is formally pro-EU but has been highly critical of the name deal, lambasting it as “treason” and appealing to nationalists in a country that has faced identity battles with neighbors since emerging from former Yugoslavia in 1991.

“Our path to progress is confirmed,” Zaev said in a victory speech after midnight Wednesday.

“The citizens went out and voted for a clear future, for unity and solidarity, for economic patriotism, for law and order,” the 45-year-old said.

Despite the first-place finish, the Social Democrats fared slightly worse than in the last poll in 2016, when they ultimately ended VMRO-DPMNE’s nearly decade-long reign, a period marked by repression and corruption under now self-exiled former strongman Nikola Gruevski.

There is a perception that beyond the progress with the EU talks, the Social Democrats have “not delivered on some of the key promises, including justice reforms,” said Elena Stavrevska, a political scientist at the London School of Economics.

Low wages, high unemployment and widespread corruption have also been gnawing away at public faith in politics for years.

“We have had enough of promises, now it is time for progress,” said 70-year-old Dimitar Sumkovski, a voter in the capital Skopje.

The elections were held to replace a caretaker government that took over after Zaev stepped down 6 months ago following the EU’s initial failure to open accession talks – a promise Brussels had made in exchange for the name change and other reforms.

The bloc later gave the green light in March, although Skopje is still waiting for a date to start formal negotiations.

“We are going into a period of hard party negotiations,” said political analyst Nikola Spasov, warning of instability ahead.

The top options for junior partners are parties representing the ethnic Albanian minority, who make up around a quarter of the two million population.

The Democratic Union for Integrity (DUI) was ranked third with some 15 seats followed by another rival Albanian camp with 12, according to the election commission.

DUI, the traditional kingmaker, has this year demanded that its candidate be named prime minister in exchange for any alliance.

Zaev – whose camp is already allied with a smaller Albanian party – has previously shot down the proposal as “blackmail.”

With nearly 400 deaths from COVID-19, the landlocked country has the highest per capita fatality rate in the Western Balkans, according to official data.

On Wednesday, masks were mandatory at polling stations, which closed later than normal to allow for more social distancing.

Those infected with the virus were able to cast ballots earlier in the week, as were the elderly and infirm. – Rappler.com