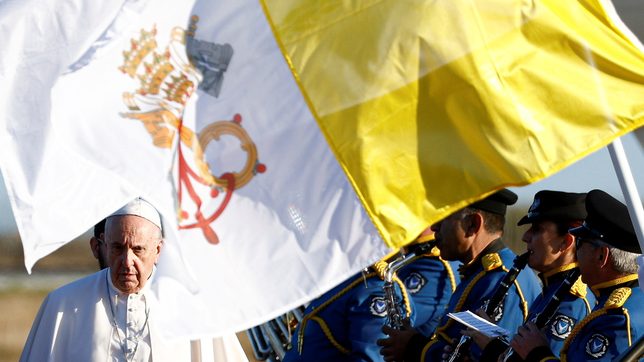 CYPRUS TRIP. Pope Francis walks past soldiers holding flags of the Vatican and the Cyprus at the Larnaca International Airport while arriving for his visit to Cyprus and Greece, in Larnaca, Cyprus, December 2, 2021.

Facebook Twitter Copy URL
Copied
'We know that it is no easy road; it is long and winding, but there is no other way to achieve reconciliation,' says Pope Francis

NICOSIA, Cyprus – Pope Francis on Thursday, December 2, urged Cypriots to seek dialogue to heal the “terrible laceration” that has divided their island for nearly half a century, saying neither side should use force or threats.

Francis, 84, started his first trip to Cyprus with a visit to the island’s Maronite cathedral, where he lauded Cyprus for its handling of a refugee influx authorities say is becoming overwhelming.

But he saved his most powerful words about the island’s stagnant political situation for an address to leaders and diplomats at the presidential palace.

“The greatest wound suffered by this land has been the terrible laceration it has endured in recent decades. I think of the deep suffering of all those people unable to return to their homes and their places of worship,” Pope Francis said.

Cyprus has been split in two since a 1974 Turkish invasion triggered by a Greek-inspired coup, though the seeds of conflict were sown earlier soon after independence from Britain in 1960.

Countless mediation attempts have failed and the peace process stalled in mid-2017, when talks collapsed. Tens of thousands of Greek and Turkish Cypriot are internally displaced.

Francis said the only word on the signpost towards peace was dialogue.

“We know that it is no easy road; it is long and winding, but there is no other way to achieve reconciliation.”

Francis is visiting the southern parts of the island, controlled by the internationally-recognised Cyprus government. A Turkish Cypriot breakaway state in northern Cyprus is recognized only by Ankara.

“The people of Cyprus lived through, and know better than anyone the pain of being uprooted from their homes, becoming refugees,” Cyprus President Nicos Anastasiades said.

Nicosia is one of the world’s last divided capitals and the Vatican embassy where the pope will be staying is right on the dividing line. A wall in the back garden of the embassy is lined with barbed wire, and beyond that, the Turkish Cypriot side of Nicosia.

The church in the compound that houses the embassy still bears scars from the crossfire of ethnic strife.

Francis, who shuns large, bulletproof cars, traveled in a small black Fiat 500 with open windows. He was greeted with cheers and applause as the vehicle navigated the capital’s narrow streets.

Cyprus says it is struggling to cope with an influx of undocumented migrants, through the dividing line splitting the island or by boats from the neighbouring Middle East.

“By your spirit of fraternity, you can remind everyone, and Europe as a whole, that we need to work together to build a future worthy of humanity, to overcome divisions, to break down walls, to dream and work for unity,” Francis said at the Maronite cathedral.

Francis, who has made defense of migrants and refugees a cornerstone of his papacy, has arranged to have 50 migrants relocated to Italy after his trip this week. He will also travel to Greece, including Lesbos Island, where many refugees have arrived. – Rappler.com