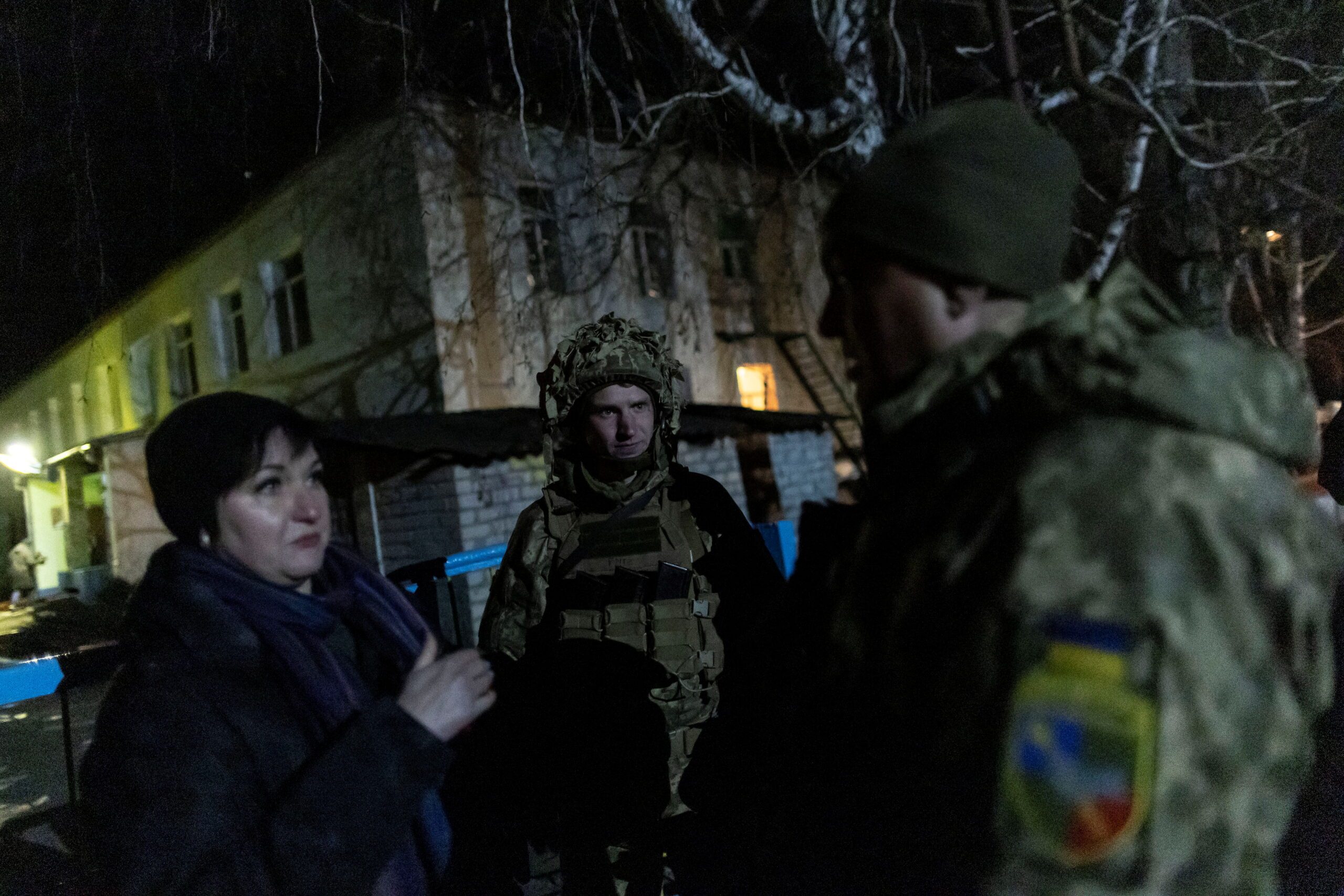 INVASION THREATS. Service members of the Ukrainian armed forces talks with a local resident outside of a kindergarten, which, according to Ukraine's military officials, was damaged by shelling, in Stanytsia Luhanska, in the Luhansk region, Ukraine, February 17, 2022.

With Western fears of war rising, the White House said US President Joe Biden’s national security team told him they still believed Russia could launch an attack in Ukraine “at any time” and he planned to convene his top advisers on Sunday to discuss the crisis.

Foreign ministers from the G7 group of rich nations said they had seen no evidence Russia is reducing its military activity in the area and remained “gravely concerned” about the situation.

After Kyiv and Moscow traded accusations over new shelling near the border, France and Germany urged all or some of their citizens in Ukraine to leave. US Defense Secretary Lloyd Austin said Russian forces were beginning to “uncoil and move closer” to the border.

“We hope he (Putin) steps back from the brink of conflict,” Austin told a news conference in Lithuania, saying an invasion of Ukraine was not inevitable.

Russia ordered the military build-up while demanding NATO stop Ukraine from ever joining the alliance but says predictions it is planning to invade Ukraine are wrong and dangerous. It says it is now pulling back while Washington and allies insist the build-up is mounting.

Washington and NATO say Moscow’s main demands are non-starters, but in Ukraine fears are growing over Putin’s plans.

Venting his frustration at a security conference in Munich, Ukrainian President Volodymyr Zelenskiy said the global security architecture was “almost broken”. He urged the permanent members of the U.N. Security Council, Germany and Turkey to meet to draw up new security guarantees for his country.

“The rules that the world agreed on decades ago no longer work,” Zelenskiy said. “They do not keep up with new threats… This is a cough syrup when you need a coronavirus vaccine.”

World Bank President David Malpass told Zelenskiy on Saturday the bank was readying funding to Ukraine of up to $350 million.

The Kremlin said Russia successfully test-launched hypersonic and cruise missiles at sea during the nuclear forces drills. Putin observed the exercises on screens with Belarusian leader Alexander Lukashenko from a “situation center.”

In his most pointed prediction so far, Biden said on Friday he was convinced that Putin has made the decision to invade Ukraine in the coming days, and Austin said on Saturday the nuclear forces exercises were stoking concerns around the world.

“President Biden continues to monitor the evolving situation in Ukraine, and is being updated regularly about events on the ground by his national security team,” White House Press Secretary Jen Psaki said in a statement. “They reaffirmed that Russia could launch an attack against Ukraine at any time.”

G7 foreign ministers called on Russia to choose the path of diplomacy. “As a first step, we expect Russia to implement the announced reduction of its military activities along Ukraine’s borders. We have seen no evidence of this reduction,” they said in a statement.

Zelenskiy said he had an “urgent” phone conversation with French President Emmanuel Macron and discussed possible ways of immediate de-escalation and political-diplomatic settlement. Macron is due to speak with Putin on Sunday.

The nuclear drills follow maneuvers by Russia’s armed forces in the past four months that have included a build-up of troops – estimated by the West to number 150,000 or more – to the north, east and south of Ukraine.

New helicopters and a battle group deployment of tanks, armoured personnel carriers and support equipment have been moved to sites in Russia near the border, according to US-based Maxar Technologies, which tracks developments with satellite imagery.

“Ignoring Russia’s legitimate rights in this area adversely affects the stability not only on the European continent, but also in the world,” Russian Foreign Minister Sergei Lavrov was quoted by his ministry as telling his French counterpart by phone.

A NATO official said the alliance relocated staff from Kyiv to the western city of Lviv and to Brussels for safety reasons. The United States and other countries have moved diplomats to Lviv.

Russian-backed rebels seized a swathe of eastern Ukraine and Russia annexed Crimea from Ukraine in 2014. Kyiv says more than 14,000 people have been killed in the conflict in the east.

Separatist leaders in eastern Ukraine have declared a full military mobilization after ordering women and children to evacuate to Russia, citing the threat of an imminent attack by Ukrainian forces, which Kyiv denied.

Kyiv and Western leaders say the mobilization, evacuation, and increased shelling are part of a Russian plan to create a pretext for an invasion.

Ukraine’s military accused Russia of faking pictures of shells to make out they were Ukrainian, and said mercenaries had arrived in separatist-held eastern Ukraine to stage provocations in collaboration with Russian special forces.

Ukraine’s foreign minister demanded an independent international investigation of the alleged incidents and the military said two soldiers had been killed in shelling by pro-Russian separatists in east Ukraine.

The two Russian-backed, self-proclaimed republics in Ukraine’s Donetsk and Luhansk regions were hit by more than 1,400 explosions on Friday, the Organization for Security and Cooperation in Europe (OSCE) said. And almost 2,000 ceasefire violations were registered in the area by OSCE monitors on Saturday, a diplomatic source told Reuters.

Multiple explosions were heard overnight into Sunday in the center of the separatist-controlled city of Donetsk, a Reuters reporter said. The blasts’ origin was not clear. There was no immediate comment from separatist authorities or Kyiv.

“It’s really scary. I’ve taken everything I could carry,” said Tatyana, 30, who was boarding a bus with her 4-year-old daughter.