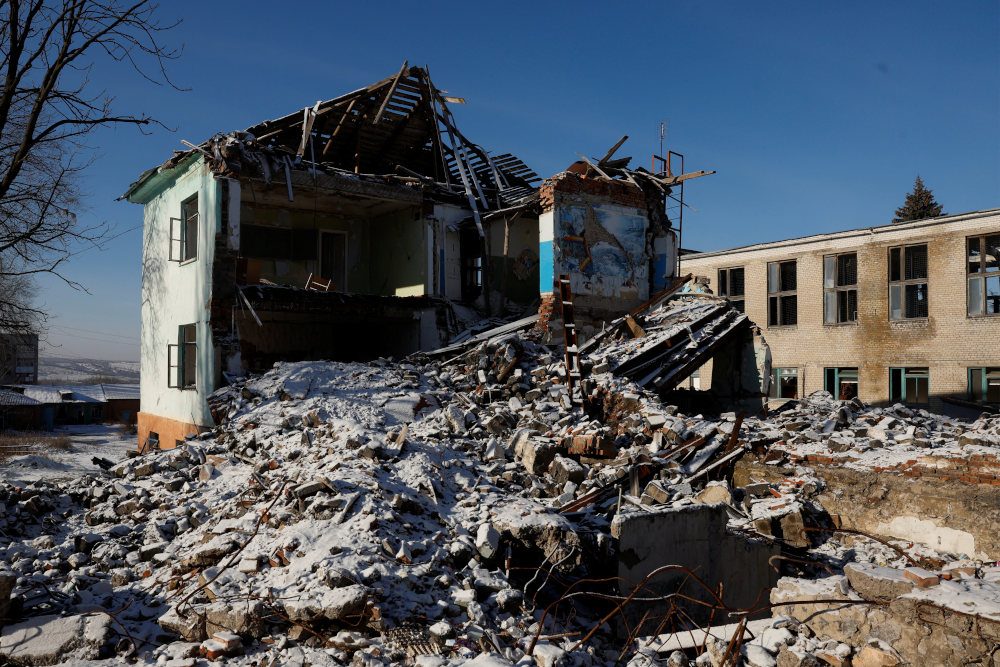 UKRAINE DAMAGE. General view of damage from a strike, as Russia's attack on Ukraine continues, in Siversk, Ukraine, on January 9, 2023.

KYIV, Ukraine – Ukrainian forces are facing waves of assaults by Russian forces on the small salt-mining town of Soledar, Kyiv officials said on Tuesday, January 10, as Moscow strives to make its first breakthrough in the east in months.

Britain’s Defense Ministry said Russian troops and mercenaries of the Wagner group were probably now in control of most of the town after advances in the last four days.

Seizing Soledar would give an advantage to Russian forces as they fight to capture the city of Bakhmut, a few kilometers (miles) to the southwest.

Troops from both sides have been taking heavy losses there in some of the most intense trench warfare since Russia invaded Ukraine nearly 11 months ago.

Bakhmut is located on a strategic supply line between the Donetsk and Luhansk regions, which make up the Donbas, Ukraine’s industrial heartland. Gaining control of Bakhmut could give Russia a platform to advance on two bigger cities – Kramatorsk and Sloviansk.

It would also give Russia a welcome battlefield victory after a series of setbacks in recent months.

“Russia’s Soledar axis is highly likely an effort to envelop Bakhmut from the north, and to disrupt Ukrainian lines of communication,” the British intelligence briefing said.

Serhiy Cherevaty, spokesman for Ukraine’s eastern forces, said the Russians were deploying their best Wagner fighters at Soledar, which had been struck 86 times by artillery over the past 24 hours.

“This is basically not a 21st-century war,” he said.

Journalist Yuriy Butusov, who is embedded with Ukrainian troops in Soledar, wrote for the online outlet New Voice that Russian forces had established fire control over the main Ukrainian supply route to the town.

“This is not a complete encirclement, but normal supply along the route is impossible, (and) this is critical for defense,” he said.

Ukrainian President Volodymyr Zelenskiy said in his nightly video address on Monday that Bakhmut and Soledar were holding on despite widespread destruction.

He cited new and fiercer attacks in Soledar, where he said no walls have been left standing and the land was covered with Russian corpses.

Russia’s defense ministry did not mention either Soledar or Bakhmut in a media briefing on Monday.

Wagner was founded by Yevgeny Prigozhin, an ally of Russian President Vladimir Putin. Drawing some recruits from Russia’s prisons, it is active in conflicts in Africa and has taken a prominent role in Russia’s war effort in Ukraine.

Prigozhin said on Saturday the area’s significance lay in a network of cavernous mining tunnels below the ground which can hold troops or tanks.

Ukrainian military analyst Oleh Zhdanov said fighting in Bahkmut and Soledar was “the most intense on the entire frontline”.

“So many remain on the battlefield … either dead or wounded,” he said on YouTube. “They attack our positions in waves, but the wounded as a rule die where they lie, either from exposure as it is very cold or from blood loss.”

Reuters could not verify the battlefield reports.

In an evacuee center in Kramatorsk, Olha, 60, said she had fled Soledar after moving from apartment to apartment as each was destroyed in tank battles.

“There isn’t one house left intact. Apartments were burning, breaking in half,” said Olha, who gave only her first name.

Ukrainian officials, led by the commander in chief General Valery Zaluzhniy, have warned that Russia is preparing fresh troops for a new offensive on Ukraine, possibly on the capital Kyiv.

“The world knows that every day of Russian presence on Ukrainian soil means deaths, injuries, pain and suffering of people,” he wrote in a message on Telegram on Tuesday morning, under pictures of Ukrainian soldiers.

“Ukraine must get everything it needs to expel terrorists from our land and to reliably protect our people from any Russian escalation plans.”

British Prime Minister Rishi Sunak’s spokesperson said London had not yet made a final decision on sending tanks to Ukraine. The spokesperson said that Britain would continue to co-ordinate its support with allies after Germany, France and the United States all indicated last week they would provide armored vehicles.

Russia began what it calls a “special military operation” in Ukraine on February 24, citing threats to its own security and a need to protect Russian speakers. Ukraine and its allies accuse Moscow of an unprovoked war to seize territory.

Moscow has also cast the conflict as a fight between Russia and hostile Western nations.

“The events in Ukraine are not a clash between Moscow and Kyiv – this is a military confrontation between Russia and NATO, and above all the United States and Britain,” Russian Security Council Secretary Nikolai Patrushev said on Tuesday.

“The Westerners’ plans are to continue to pull Russia apart, and eventually just erase it from the political map of the world,” Patrushev, one of Putin’s closest allies, told the Argumenti i Fakti newspaper in an interview.

NATO Secretary General Jens Stoltenberg said in Brussels on Tuesday the military alliance must further strengthen its support for Ukraine. Putin had failed in his attempts to divide Western allies over the conflict, he said.

Meanwhile Russia has appointed Colonel-General Alexander Lapin as chief of staff of the country’s ground forces, state-owned news agency TASS reported, despite criticism from hawks over his performance in Ukraine. His promotion is the latest in a series of changes to Moscow’s military leadership over the course of the war. – Rappler.com