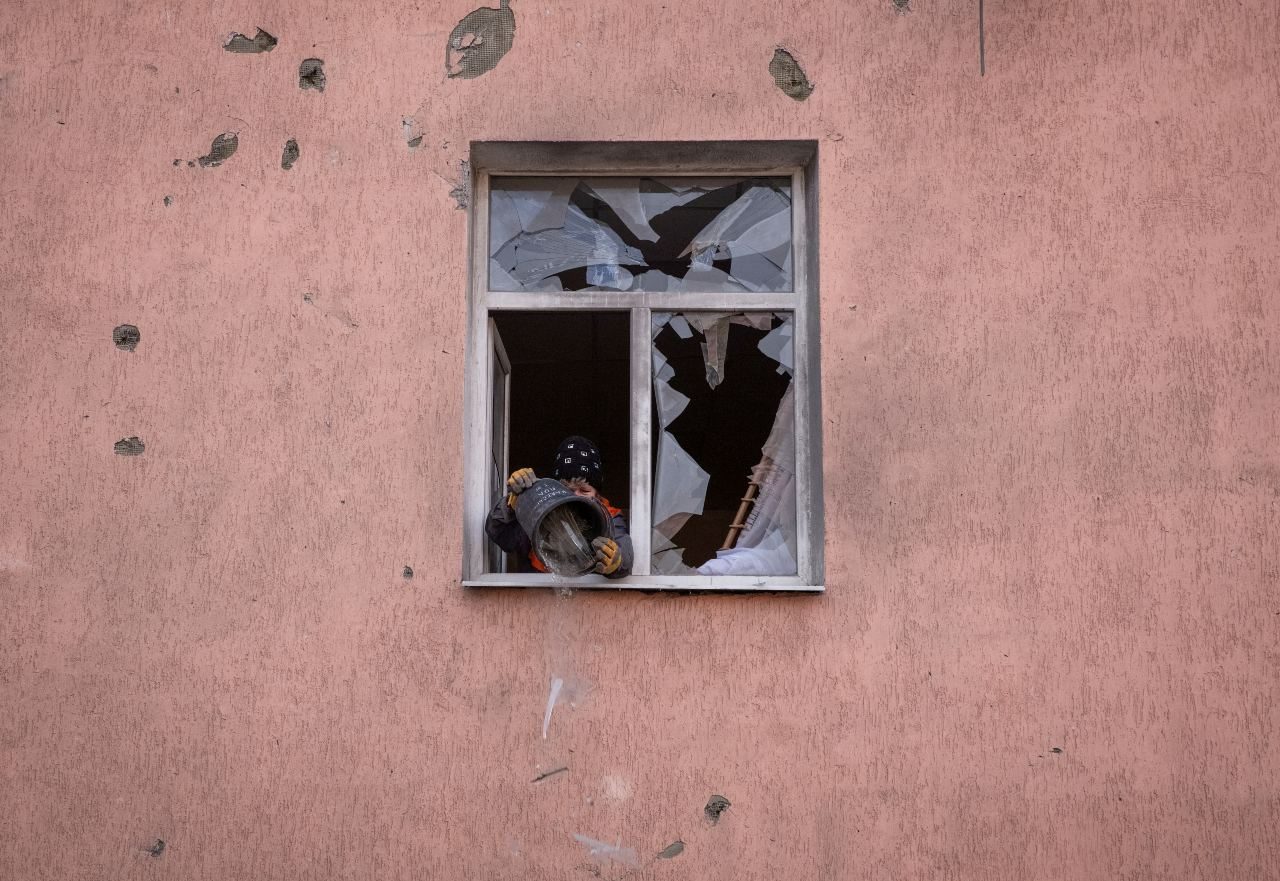 CLEANUP. In this file photo, a resident removes shards of glass from his broken window in a flat in a residential building damaged by a Russian military attack, as Russia's invasion of Ukraine continues, in Kramatorsk, Ukraine, on December 23, 2022.

Facebook Twitter Copy URL
Copied
(1ST UPDATE) On January 6 – Christmas Eve for Russians and many Ukrainians – Russian shells hit Kramatorsk, a Ukrainian city near the frontline in the industrial Donetsk region that Russia claims as its territory

Artillery fire could be heard from the front line in Ukraine on Friday, January 6, even after the official start of a unilateral ceasefire declared by Moscow and rejected by Kyiv.

President Vladimir Putin ordered the 36-hour ceasefire from midday on Friday to observe Orthodox Christmas. Kyiv has said it has no intention to stop fighting, rejecting the purported truce as a stunt by Moscow to buy time to reinforce troops that have taken heavy losses this week.

Russia’s defense ministry said its troops began observing the ceasefire from noon Moscow time (0900 GMT) “along the entire line of contact” in the conflict, but said Ukraine kept up shelling populated areas and military positions.

Reuters could not immediately verify whether the intensity of fighting slowed following the start of the truce. One witness in the Russian-occupied regional capital Donetsk, close to the front, described outgoing artillery fired from pro-Russian positions on the city’s outskirts after the truce was meant to take effect.

In the hours prior, rockets slammed into a residential building in the Ukrainian city of Kramatorsk close to the eastern frontline, damaging 14 homes but with no casualties, the mayor said. Residents described several explosions. (LIVE UPDATES: Russia-Ukraine crisis)

“It’s bad, very bad. We need to pressure them, get them to leave, maybe more air defense systems would help. This happens often, not only on festive occasions. Every other day,” said Oleksnadr, 36, outside a supermarket at the time of the attack.

One rescue worker was killed and four others injured after Russian forces shelled a fire department in the southern Ukrainian city of Kherson before the deadline early on Friday, the regional governor said. Reuters could not immediately verify this.

Putin ordered the 36-hour ceasefire in the 10-month-long war in a surprise move in Thursday, saying it would run through to the end of Russian Orthodox Christmas on Saturday.

But Ukrainian President Volodymyr Zelenskiy rejected the ceasefire out of hand as a ploy for Russia to buy time.

“They now want to use Christmas as a cover, albeit briefly, to stop the advances of our boys … and bring equipment, ammunition and mobilized troops closer to our positions,” Zelenskiy said in his Thursday night video address.

Denis Pushilin, the Russian-installed leader in Donetsk, said on Thursday that Putin’s order only covered offensive operations and his forces would hit back if fired upon.

Vladimir Saldo, the Russian-installed administrator of Ukraine’s Kherson region, described the ceasefire as “a gesture of goodwill,” but said the situation on the front lines would not change because of it.

Despite air raid warnings sounding in several regions, no major air strikes were reported by Ukrainian officials after the ceasefire starting time.

The battles had not previously slowed during the festive season and Russia mounted waves of air strikes that hit infrastructure and injured residents in Kyiv over New Year, usually a time of celebration in both Ukraine and Russia.

Russia invaded Ukraine on February 24 last year, starting a war that has killed tens of thousands of people and displaced more than a third of the country’s 44 million population. The war has reduced major cities to rubble and crushed Ukraine’s economy.

With weapons and financial support from the United States and Europe, Ukraine has driven Russia back from some of its territory but battles are raging over territory in the east and south.

The town of Bakhmut, 12 miles (20 km) southeast of Kramatorsk, has for months been the most intense battleground, still in Ukrainian hands despite dug-in trench warfare and months of battering by Russian forces that have left much of it in ruins.

“I tell people we should pray for the guys holding Bakhmut. If Bakhmut is given up, Kramatorsk will suffer heavily,” said Yehven, 32, also at the supermarket.

This week, Ukraine’s Western allies finally announced shipments of large numbers of armored fighting vehicles, which Kyiv has been requesting for months to give it the upper hand in mechanized battles against Russian tanks at the front.

Germany said it would deliver an advanced Patriot anti-aircraft missile system and around 40 Marder infantry fighting vehicles within three months. Washington is also due on Friday to announce Bradley Fighting Vehicles as part of a new $2.8 billion security package. France also announced a package of armored vehicles this week.

Ukraine’s military General Staff said its soldiers repelled repeated Russian attacks over the past day, with Moscow focused on trying to take towns in Donetsk, including Bakhmut.

“The enemy is concentrating its main efforts on attempts to establish control over the Donetsk region” without success, the General Staff said in a statement, adding that both Ukraine and Russia had launched multiple air strikes over the past day.

US President Joe Biden suggested Putin’s ceasefire offer was a sign of desperation: “I think he’s trying to find some oxygen,” he told reporters at the White House.

Zelenskiy, switching to Russian rather than Ukrainian and addressing Russians, said that ending the war meant “ending your country’s aggression … And the war will end either when your soldiers leave or we throw them out.” – Rappler.com