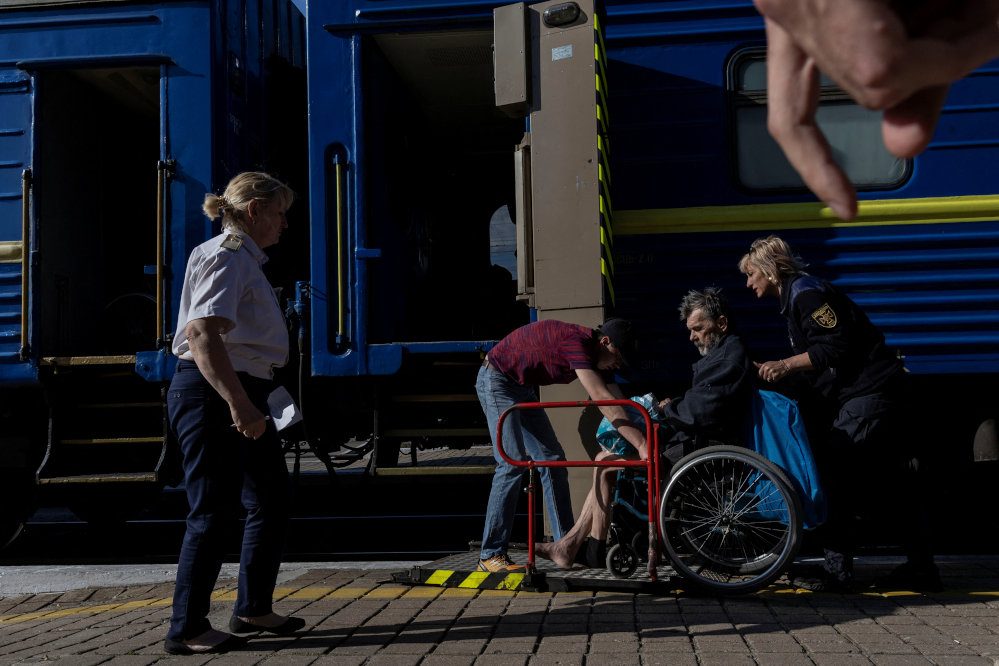 GIVING HELP. Ukrainian Emergency Service members help an elderly man to board a train during an evacuation effort from war-affected areas of eastern Ukraine, amid Russia's invasion, in Pokrovsk, Donetsk region, Ukraine, May 24, 2022.

Russian forces sought to encircle Ukrainian troops in twin eastern cities straddling a river as President Volodymyr Zelenskiy warned Moscow was seeking to destroy the industrial Donbas region where it has focused its attacks.

Russia is attempting to seize the separatist-claimed Donbas’ two provinces, Donetsk and Luhansk, and trap Ukrainian forces in a pocket on the main eastern front.

“The situation in Donbas is extremely difficult. All the remaining strength of the Russian army is now concentrated on this region,” Zelenskiy said in a late-night address on Tuesday, May 24. “The occupiers want to destroy everything there.”

By Pavel Polityuk and Max Hunder

After failing to seize Kyiv or Ukraine’s second city Kharkiv, Russia is trying to take the rest of the separatist-claimed Donbas’ two provinces, Donetsk and Luhansk, and trap Ukrainian forces in a pocket on the main eastern front.

In the easternmost part of the Ukrainian-held Donbas pocket, the city of Sievierodonetsk on the east bank of the Siverskiy Donets River and its twin Lysychansk, on the west bank, have become a pivotal battlefield. Russian forces were advancing from three directions to encircle them.

President Volodymyr Zelenskiy’s office said the Russians launched an offensive on Sievierodonetsk early on Wednesday and the town was under constant fire from mortars.

“At the moment, with the support of artillery, the Russian occupiers are attacking Sievierodonetsk,” Gaidai said.

Reuters could not immediately verify information about the fighting.

In the town of Sloviansk west of Donbas, many residents took advantage of what Ukraine said was a break in the Russian assault to leave. “My house was bombed, I have nothing,” said Vera Safronova, seated in a train carriage among the evacuees.

Along with the eastern Donbas region, Moscow is also targeting southern Ukraine and has blockaded ships that would normally export Ukrainian grain and sunflower oil through the Black Sea, pushing up prices globally and threatening lives.

“It cannot be in Russia’s interest that because of Russia, people are dying of hunger abroad,” European Commission President Ursula von der Leyen told Reuters on Tuesday at the World Economic Forum in Davos, calling for a dialogue.

Russia, which has blamed Ukraine and the West for the food crisis, said it was ready to provide a humanitarian corridor for vessels carrying food to leave Ukraine but said Western sanctions would need to be lifted in return.

Russian Deputy Foreign Minister Andrei Rudenko was quoted by Interfax news agency as saying solving the food problem required a “comprehensive approach”. Russia was in touch with the United Nations, and “does not rule out the possibility of global talks to unblock Ukraine’s ports,” he said.

Rudenko said it was premature to establish a Russian military base in Ukraine’s Kherson region, adjacent to Crimea, which Moscow seized from Ukraine in 2014.

Three months into the invasion, Russia still has only limited gains to show for its worst military losses in decades, while much of Ukraine has suffered devastation as Moscow stepped up artillery strikes to compensate for its slow progress.

Western nations have imposed severe sanctions on Russia and, in a decision that could push Moscow closer to the brink of default, the Biden administration said it would not extend a waiver set to expire on Wednesday that enabled Russia to pay US bondholders.

Unlike in most default situations, Moscow is not short of money. Russia’s debt repayment dues pale in comparison to its oil and gas revenues, which stood at $28 billion in April alone thanks to high energy prices.

Russian lawmakers gave the first stamp of approval to a bill that would allow Russian entities to take over foreign companies that have left the country in opposition to Moscow’s actions in Ukraine, a government online portal showed.

British retailer Marks & Spencer MKS.L on Wednesday became the latest company to announce it would pull out of Russia completely, taking a charge of 31 million pounds ($39 million).

Zelenskiy told the Davos forum the conflict could only be ended with direct talks between him and Putin, and said Russia should withdraw to lines in place before its February 24 invasion.

“That might be a first step towards talks,” he said.

The prime minister of Estonia, anther former Soviet republic which fears Russian aggression, said Ukraine should not be forced into compromises.

“It is much more dangerous giving in to Putin, than provoking him. All these seemingly small concessions to the
aggressor lead to big wars. We have done this mistake already three times: Georgia, Crimea and Donbas.” – Rappler.com