Zelenskiy calls for punishment of Russia including loss of UN veto PRISONER SWAP. Ukrainian prisoners of war walk after a swap, amid Russia's attack on Ukraine, at a location given as Chernihiv region, Ukraine in this screen grab taken from a handout video on September 21, 2022.

Coordination Headquarters for Treatment of Prisoners of War/Handout via Reuters

President Volodymyr Zelenskiy demanded a special United Nations tribunal impose “just punishment” on Russia for its invasion of Ukraine, including financial penalties and stripping Moscow of its veto power in the Security Council. 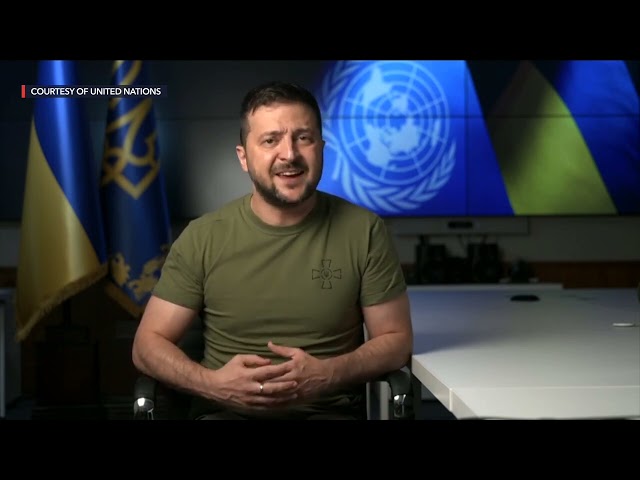 Zelenskiy’s recorded address to world leaders at the UN General Assembly on Wednesday, September 21, came after Russian President Vladimir Putin ordered Moscow’s first wartime mobilization since World War Two and threatened to use nuclear weapons to defend Russia in what he has cast as a defining East-West clash.

Moscow plans to conscript some 300,000 troops in an apparent escalation of its Ukraine invasion that began in February and has left thousands dead, displaced millions and reduced towns to rubble. 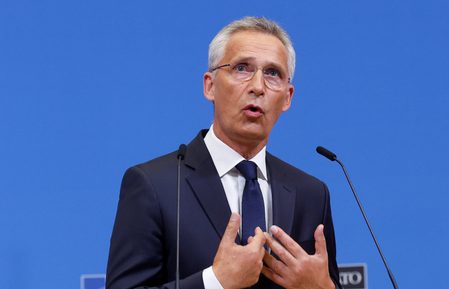 “A crime has been committed against Ukraine, and we demand just punishment,” Zelenskiy told the UN body.

“A special tribunal should be created to punish Russia for the crime of aggression against our state… Russia should pay for this war with its assets,” the Ukrainian president said, urging the UN to “remove the right of veto” from Russia as a Security Council member.

Zelenskiy laid out what he said were five non-negotiable conditions for peace. These included punishment for Russian aggression, restoration of Ukraine’s security and territorial integrity, and security guarantees.

Many delegates at the UN gave Zelenskiy a standing ovation at the end of his speech.

Earlier on Wednesday, Putin had ordered the military draft in a televised address in which he also announced moves to annex four Ukrainian provinces and threatened to use nuclear weapons to defend Russia, declaring: “It’s not a bluff.”

The reservists’ main task will be to reinforce the front line in Ukraine, which is currently over 1,000 kilometers (621 miles) long, Russian Defense Minister Sergei Shoigu said.

The reservists will need training and Western military analysts said it will be several months before they see action.

Flights out of Russia quickly sold out, and jailed opposition leader Alexei Navalny called for mass demonstrations against the mobilization.

Offering no evidence, Putin accused officials in NATO states of threatening to use nuclear weapons against Russia. They should know that “the weathervane can turn towards them”, he said, adding that Russia “also has various means of destruction.”

“When the territorial integrity of our country is threatened, we will certainly use all the means at our disposal to protect Russia and our people. It’s not a bluff.”

US President Joe Biden, in a speech to the U.N. General Assembly, responded: “Again, just today, President Putin has made overt nuclear threats against Europe, in a reckless disregard for the responsibilities of the non-proliferation regime.”

Foreign ministers from the Group of Seven (G7) advanced economies confirmed in a meeting in New York on Wednesday their cooperation in extending support for Ukraine and responding to food and energy security, the Japanese Foreign Ministry said.

Russia and Ukraine carried out an unexpected prisoner swap on Wednesday, the largest since the war began and involving almost 300 people, including 10 foreigners and the commanders who led a prolonged Ukrainian defense of Mariupol earlier this year.

The foreigners released included two Britons and a Moroccan who had been sentenced to death in June after being captured fighting for Ukraine. Also freed in the deal brokered by Saudi Arabia, according to a Saudi ministry, were three other Britons, two Americans, a Croatian, and a Swedish national.

The released Ukrainians had been captured after a long battle for the port city of Mariupol earlier this year and included top military commanders, said Andriy Yermak, the head of President Volodymyr Zelenskiy’s office.

The moves come at a time when Russia has been facing a string of battlefield failures, with its invasion force routed in northeastern Ukraine.

Ukrainian forces say they are now poised to push deeper into territory Moscow had captured over months of heavy fighting.

“No amount of threats and propaganda can hide the fact that Ukraine is winning this war, the international community are united and Russia is becoming a global pariah,” said British Defense Secretary Ben Wallace.

Russia’s mobilization may be the riskiest domestic political move of Putin’s two decades in power, and followed months of Kremlin promises it would do no such thing.

The war has so far appeared to enjoy popular support in a country where independent media have all been shut down and public criticism of the “special military operation” is banned.

But for many ordinary Russians, especially in the urban middle classes, the prospect of being sent to fight would be the first hint of the war affecting them personally.

On the Moscow metro, men could be seen studying call-up papers.

“You always feel worried at moments like these. Because you have a wife and kids and you think about it,” one resident told Reuters.

Several Western military experts said drafting hundreds of thousands of new troops would take months, do little to slow Russia’s losses, and could even make matters worse by drawing resources away from the battlefield to train and equip recruits. – Rappler.com