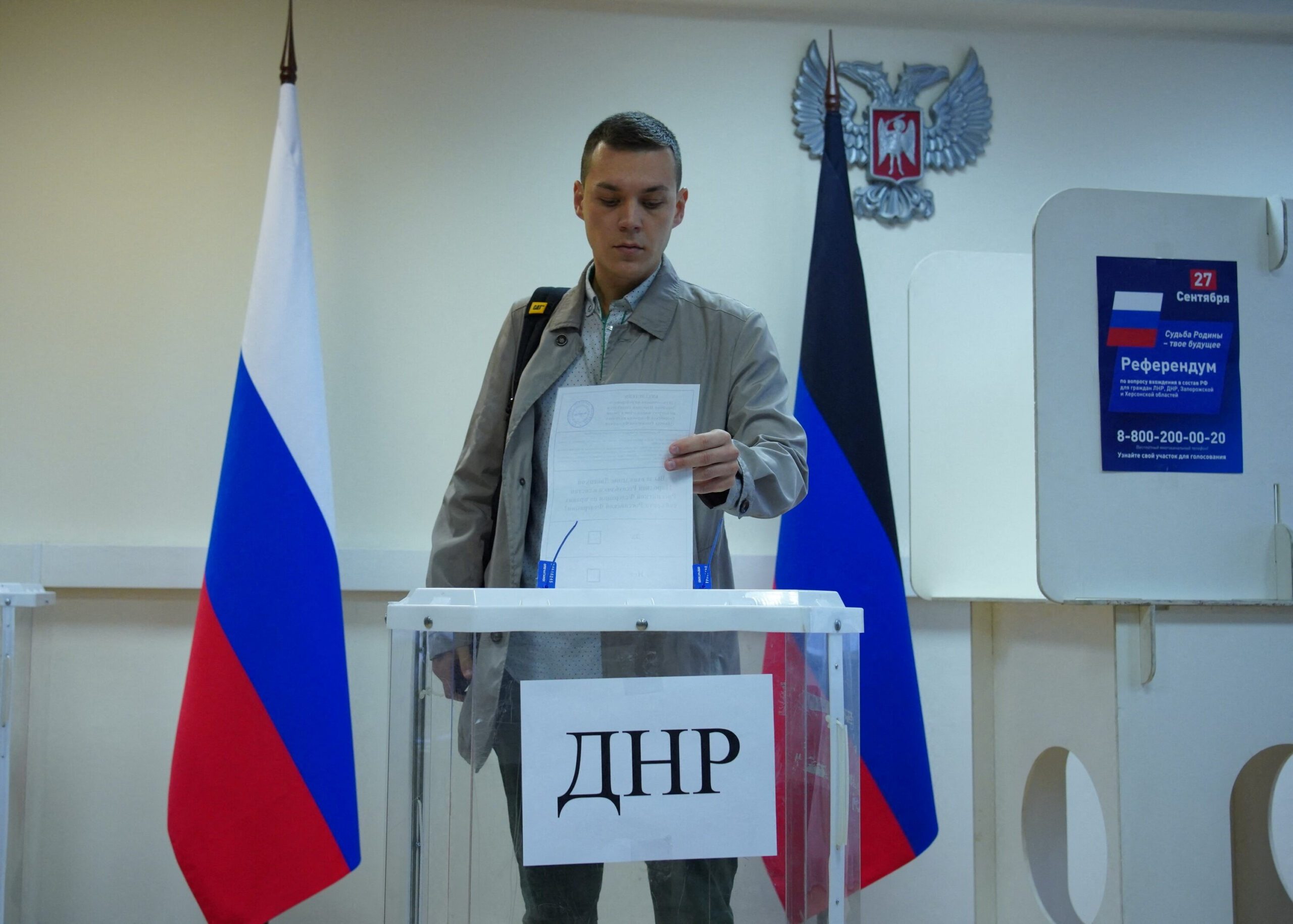 VOTING. A man casts his ballot during the first day of a referendum on the joining of Russian-controlled regions of Ukraine to Russia, at a polling station in Moscow, Russia September 23, 2022. Voting takes place for residents of the self-proclaimed Donetsk (DPR) and Luhansk People's Republics (LPR) and Russian-controlled areas of the Kherson and Zaporizhzhia regions of Ukraine.

Facebook Twitter Copy URL
Copied
'These are not just crimes against international law and Ukrainian law, these are crimes against specific people, against a nation,' Ukrainian President Volodymyr Zelenskiy says

KYIV, Ukraine – Russia launched referendums on Friday, September 23, aimed at annexing four occupied regions of Ukraine, drawing condemnation from Kyiv and Western nations who dismissed the votes as a sham and pledged not to recognize their results.

Ukrainian officials said people were banned from leaving some occupied areas until the four-day vote was over, armed groups were going into homes, and employees were threatened with the sack if they did not participate.

Ukrainian President Volodymyr Zelenskiy said in a nightly address that the votes would be “unequivocally condemned” by the world, along with the mobilization Russia began this week, including in Crimea and other areas of Ukraine occupied by Russia.

The votes on becoming part of Russia were hastily-organized after Ukraine recaptured large swathes of the northeast in a counter-offensive earlier this month.

With Russian President Vladimir Putin also announcing a military draft this week to enlist 300,000 troops to fight in Ukraine, the Kremlin appears to be trying to regain the upper hand in the grinding conflict since its February 24 invasion.

Zelenskiy also addressed people in parts of Ukraine occupied by Russia, and said they should resist efforts to mobilize them to fight. “Hide from Russian mobilization in any way you can. Avoid draft orders. Try to move to the territory of free Ukraine,” he said, urging those who did end up in the Russian armed forces to “sabotage,” “interfere,” and pass on intelligence to Ukraine.

By incorporating the four areas, Moscow could portray attacks to retake them as an attack on Russia itself – potentially using that to justify even a nuclear response.

Putin and other Russian officials have mentioned nuclear weapons as an option in extremis: a terrifying prospect in a war that has already killed tens of thousands of people, uprooted millions and pummeled the global economy.

Voting in the provinces of Luhansk, Donetsk, Kherson, and Zaporizhzhia in the east and southeast, representing about 15% of Ukrainian territory, was due to run from Friday to Tuesday.

“Today, the best thing for the people of Kherson would be not to open their doors,” said Yuriy Sobolevsky, the displaced first deputy council chairman of Kherson region.

In the Donetsk region, the turnout on Friday was 23.6%, Tass cited a local official as saying. Over 20.5% of voters eligible to vote in the Zaporizhzhia region and 15% of those in the Kherson region voted on Friday, Russia’s Interfax news agency reported, citing local electoral officials.

“In our view, that’s enough for the first day of voting,” the head of Kherson’s Russian-installed election commission, Marina Zakharova, was quoted as saying.

Polling stations were also set up in Moscow, for residents of those regions now living in Russia. Flag-waving government supporters attended rallies in Moscow and St. Petersburg in favour of the referendums and the war effort.

Serhiy Gaidai, Ukraine’s Luhansk governor, said that in the town of Starobilsk, the population was banned from leaving and people were being forced out of homes to vote.

In the town of Bilovodsk, a company director told employees voting was compulsory and anyone refusing to take part would be fired and their names given to security services, he added.

Reuters could not immediately verify reports of coercion.

Ukraine, Western leaders, and the United Nations condemned the votes as an illegitimate precursor to illegal annexation. There are no independent observers, and much of the pre-war population has fled.

Canadian Prime Minister Justin Trudeau, speaking in Ottawa, decried the “fake referendums” and said Russia “is now in total violation of the UN Charter, of its principles, of its values, of everything that the UN stands for.”

NATO Secretary General Jens Stoltenberg said the military alliance would step up support for Ukraine in response to the referendums.

Moscow says they offer an opportunity for people in the region to express their view.

Russia previously used a referendum as a pretext for annexation in Ukraine’s Crimea in 2014, which the international community has not recognized.

Putin maintains Russia is carrying out a “special military operation” to demilitarize Ukraine, rid it of dangerous nationalists, and defend Russia from transatlantic alliance NATO.

Ostracized by most European leaders, Putin drew some rare sympathy from long-time friend Silvio Berlusconi, the former Italian premier, who said he had been “pushed” into the invasion to try and put “decent people” in charge of Kyiv.

However, Ukraine and the West say the war is an unprovoked, imperialist bid to reconquer a country that shook off Russian domination with the 1991 break-up of the Soviet Union.

Russia preparing for next stage of offensive, Ukraine says A UN-mandated investigation commission said it had found evidence of war crimes including executions, rape, torture, and confinement of children in Russian-occupied areas of Ukraine, after visits to 27 areas and interviews with over 150 victims and witnesses.

On the battlefield, Ukraine said it had downed four Iranian-made “kamikaze” drones over the sea near the port of Odessa. Ukraine issued a rebuke to Tehran for providing the weapons to Russia and said it would strip Iran’s ambassador of accreditation and slash the number of Iranian diplomats in Kyiv.

At the borders, Russians kept leaving to avoid the military draft. “We don’t support what is happening now. We don’t want to be a part of it,” said Slava, 29, with her partner Evgeniy at a crossing into Finland where traffic has surged. – Rappler.com