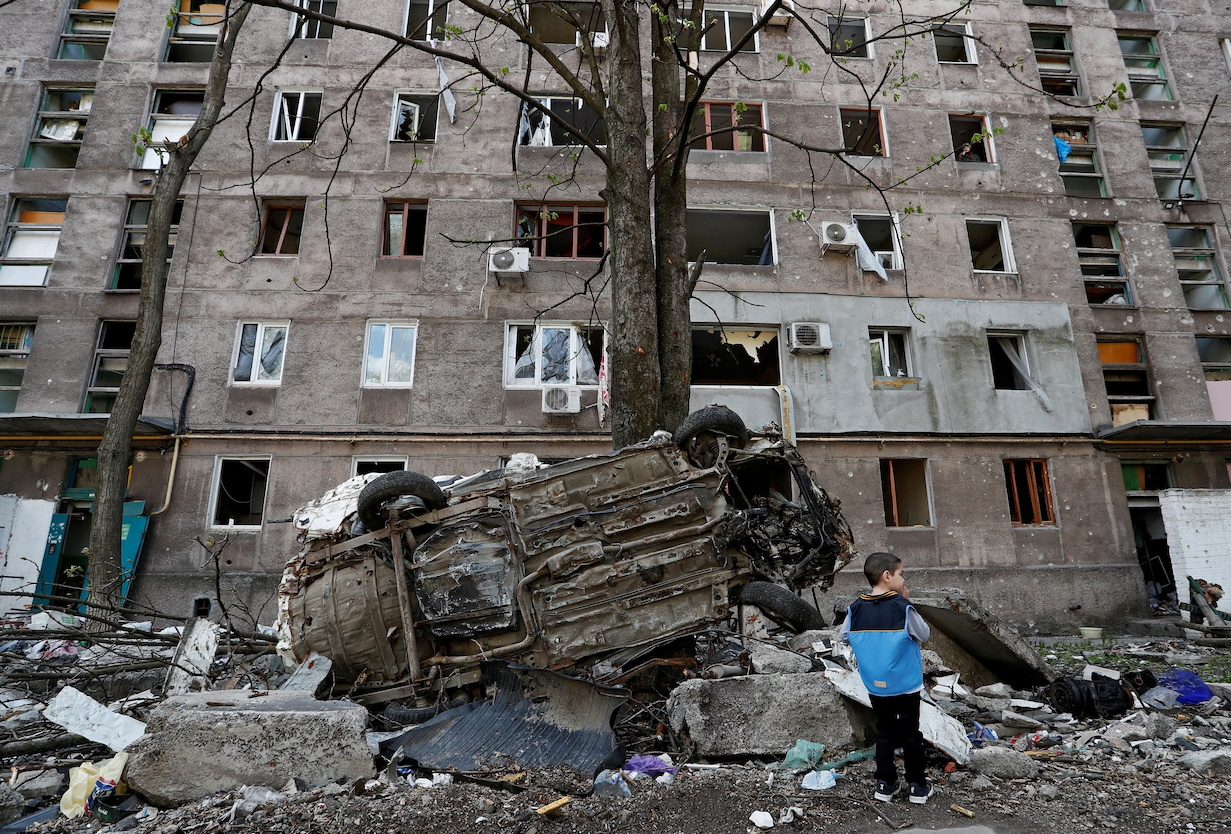 FILE PHOTO: A boy stands next to a wrecked vehicle in front of an apartment building damaged during Ukraine-Russia conflict in the southern port city of Mariupol, Ukraine April 24, 2022. REUTERS/Alexander Ermochenko/File Photo

Facebook Twitter Copy URL
Copied
Street after street is a landscape of bombed-out apartment blocks, blackened by smoke. Destroyed military vehicles lie in the rubble. Thousands of people are believed to have died.

KYIV, Ukraine – In the years prior to Russia’s invasion of Ukraine, the port city of Mariupol was undergoing a makeover.

More than $600 million was spent on new roads, a children’s hospital and parks to modernize the mainly Russian-speaking city as part of a campaign to show the benefits of life in West-leaning Ukraine following Russia’s annexation of Crimea in 2014.

“We lived well, happily,” said Maria Danylova, 24, who moved into a new apartment in the city last August after she married. Like most of her family she works for steel giant Metinvest, which has invested over $2 billion into its two huge Mariupol plants since 2014.

“It was a free developing city, which provided everything we wanted,” she said, recalling weekend strolls with her parents on the restored seafront.

Now after two months of bombardment, the city is in ruins and makeshift graves line its streets.

Street after street is a landscape of bombed-out apartment blocks, blackened by smoke. Destroyed military vehicles lie in the rubble. Thousands of people are believed to have died.

Mariupol is a strategic prize for Russia, reinforcing its access to the annexed Crimea peninsula via territory held by pro-Russian separatists.

But the intensity of the siege has damaged nearly half of the industrial city beyond repair, according to the local authorities.

The fighting also stopped work at the city’s vast steel works, one of which remains the last redoubt for encircled Ukrainian troops.

“Everything that was invested (into Mariupol) has been destroyed,” Infrastructure Minister Oleksander Kubrakov told Reuters.

Fringed by smoke stacks, the steel town on the Sea of Azov was once synonymous with post-Soviet industrial decline and pollution.

Its fortunes shifted in 2014 with the outbreak of fighting with Russia-backed separatists in eastern Ukraine. Briefly controlled by the rebels, Mariupol was recaptured by Ukrainian forces, making it the largest city in the eastern Donbas region under Kyiv’s control.

More than 100,000 people fled nearby separatist-held territories to make a new life in Mariupol and local authorities launched the plan to revamp the city.

Metinvest modernized its two plants, Azovstal and Ilyich Steel. In 2020, it completed an emissions-cutting project there that it said was one of the largest environmental projects in Ukraine’s history.

“Over the past seven years we have managed to create this showcase of a revived Ukrainian Donbas,” Vadym Boichenko, who became mayor in 2015, told Reuters.

“Young people were in these parks, with coffee, with guitars – like in the centre of Europe, just hanging out on the grass.”

In the early hours of February 24, a column of Russian tanks and military vehicles was seen heading towards Mariupol and blasts rang out in its outskirts. The invasion – which Russia calls a “special military operation” – had begun and the city was about to become a battleground.

Residents fled or moved to basement shelters to escape the bombardment that soon cut off all utilities. Metinvest suspended operations.

On March 9, bombs hit the maternity wing of a children’s hospital that had been renovated under the reconstruction plan. The blast killed at least three people and tore off part of the facade.

“We only just opened,” Boichenko said.

Danylova was sheltering in the corridor of her parents’ apartment on March 13 when a shell hit the floor above. They moved down to her apartment on the floor below, but a few hours later another shockwave from a nearby strike blew out the windows of her living room and knocked the door off its hinges.

Danylova and her husband started sleeping in the freezing corridor of the apartment block, crammed on the floor with their dog and her parents.

“From our windows they were shooting at neighboring buildings. They drove five tanks under our building and started firing from there,” said Danylova, who eventually escaped the city with her family on March 24.

Weeks of fighting and aerial raids destroyed historic landmarks, including Azov Shipyard, the city’s oldest business, founded in 1886, according to the city council.

In mid-March, a direct strike reduced most of the Soviet-built Donetsk Regional Drama Theatre to rubble, burying hundreds of civilians who had been sheltering underneath, according to the Ukrainian authorities. Reuters has not been able to verify the estimated death toll.

On April 21, nearly two months into the siege, Russia declared victory in Mariupol although remaining Ukrainian forces held out in a vast underground complex below Azovstal.

“Ninety percent of the city’s infrastructure is destroyed one way or another,” the mayor said in an interview the same day, citing photographic evidence gathered by his team.

Metinvest told Reuters the full scale of damage to its assets from Russian bombing was still being assessed.

The city previously accounted for over one third of Ukraine’s metallurgical production capacity.

“We are outraged that Mariupol, a city that was so prosperous until recently, has been turned into ruins. We are worried about every person who cannot be reached,” Metinvest said.