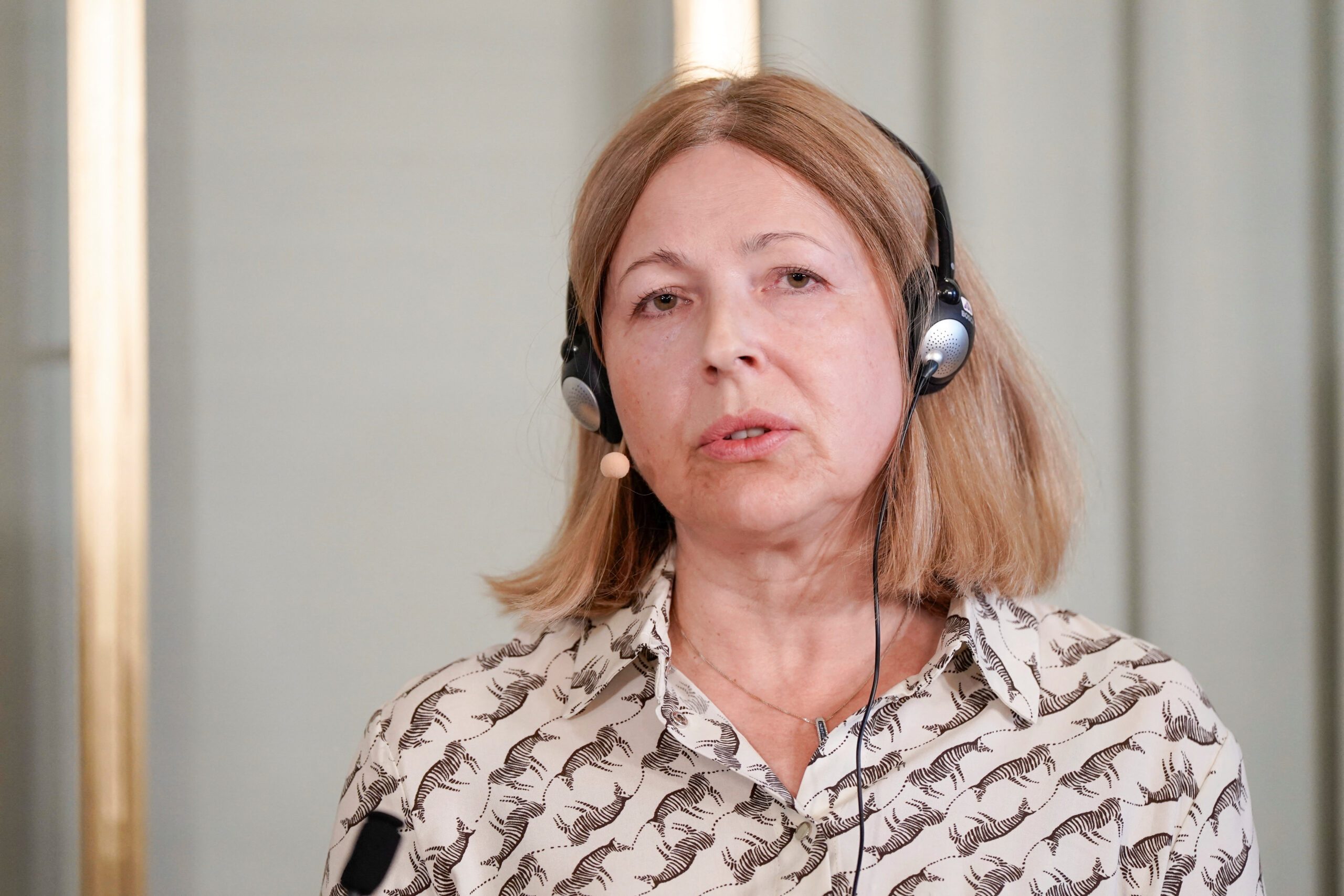 Facebook Twitter Copy URL
Copied
'I know exactly what kind of Ukraine would suit Russia and Putin – a dependent dictatorship. The same as today's Belarus, where the voice of the oppressed people is ignored and disregarded,' says Natalia Pinchuk, quoting her husband Nobel Peace Prize winner Ales Byalyatski

OSLO, Norway – Russia wants to turn Ukraine into a “dependent dictatorship” like Belarus, the wife of jailed Belarusian Nobel Peace Prize laureate Ales Byalyatski said on Saturday, December 10, upon receiving the prize on his behalf, speaking his words.

Byalyatski, Russian rights group Memorial and Ukraine’s Center for Civil Liberties won the 2022 Nobel Peace Prize in October, amid the war in Ukraine that followed Russia’s invasion of its neighbor.

Receiving the award on behalf of her husband at Oslo City Hall, Natalia Pinchuk said Byalyatski dedicated the prize to “millions of Belarusian citizens who stood up and took action in the streets and online to defend their civil rights.”

“It highlights the dramatic situation and struggle for human rights in the country,” she said, adding she was speaking her husband’s words.

Pinchuk has met her husband once since he was named a Nobel Peace Prize laureate, in prison, behind a glass wall, she told a news conference on Friday.

“I know exactly what kind of Ukraine would suit Russia and Putin – a dependent dictatorship. The same as today’s Belarus, where the voice of the oppressed people is ignored and disregarded,” Pinchuk said on Saturday, quoting her husband.

Belarusian security police detained Byalyatski, 60, and others in July last year in a crackdown on opponents of the country’s president, Alexander Lukashenko.

Authorities had moved to shut down non-state media outlets and human rights groups after mass protests the previous August against a presidential election that the opposition said was rigged.

Byalyatski is the fourth person to win the Nobel Peace Prize while in detention, after Germany’s Carl von Ossietzky in 1935, China’s Liu Xiaobo in 2010, and Myanmar’s Aung San Suu Kyi, who was under house arrest, in 1991.

The chair of the Norwegian Nobel Committee said during Saturday’s ceremony that the committee’s “thoughts were with all prisoners of conscience in Belarus”.

“Most particularly, we think of Ales Byalyatski in his dark and isolated prison cell in Minsk,” Berit Reiss-Andersen told the audience, which included King Harald and Queen Sonja.

“You are not alone. We stand with you.”

The United Nations human rights chief said in March that nearly 1,100 activists, opposition members and journalists are being detained on “politically motivated charges” in Belarus and called for their release.

Belarus’s delegation to the UN Human Rights Council in Geneva dismissed the report, with its diplomat Andrei Taranda telling the forum: “It is filled with allegations and false accusations.”

Belarus and Russia are formally part of a “union state” and are closely allied economically and militarily. Lukashenko’s dependence on Moscow deepened after Russia helped him quash the protests that followed the disputed 2020 election.

Russia used Belarus as a staging post for its failed advance on Kyiv, starting on February 24. Belarus has said it will not enter the war in Ukraine. Russia said on Thursday its troops were taking part in tactical exercises in Belarus, amid concern that Moscow is pressing its ally to get more involved in the war. – Rappler.com