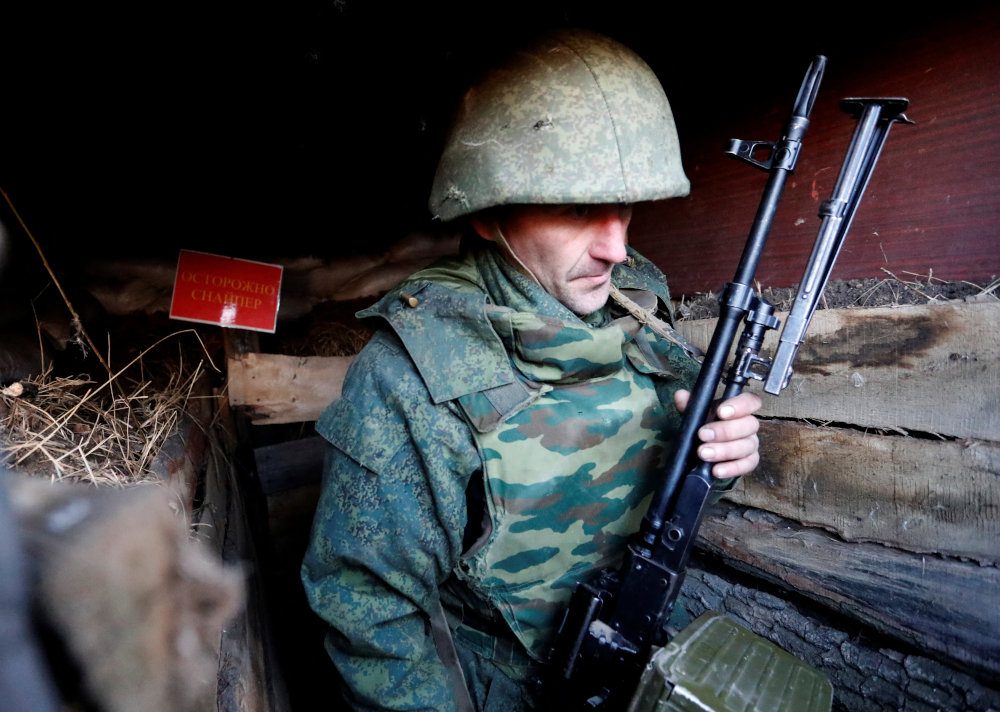 WEAPONS AT THE READY. A militant of the self-proclaimed Donetsk People's Republic (DNR) holds a weapon at fighting positions on the line of separation from the Ukrainian armed forces near the rebel-controlled settlement of Staromykhailivka (Staromikhailovka) in Donetsk Region, Ukraine on February 15, 2022.

Russian-backed rebels and Ukrainian forces traded accusations on Thursday, February 17, of firing shells across the ceasefire line in eastern Ukraine, and Kyiv said the incidents looked like a “provocation” at a time when Russia has troops massed on the frontier.

Moscow denies Western accusations it is planning to invade its neighbor and said this week it was pulling back some of the more than 100,000 troops it has sent to the area. The West disputes that there has been a significant withdrawal and the United States said thousands more troops were still arriving.

Western countries have repeatedly accused Russia of planning either to incite or stage an incident in the rebel-held areas, to justify an attack. Moscow, for its part, has accused Kyiv of planning an escalation to try to recapture territory by force.

A senior Ukrainian government source said the shelling at the line of contact with Russian-backed separatist forces went beyond the scale of ceasefire violations routinely reported throughout the conflict.

“It is not typical. It looks a lot like a provocation,” the source told Reuters.

In Moscow, Kremlin spokesperson Dmitry Peskov said Russia was “seriously concerned” about the reports of escalation.

A Reuters photographer in the town of Kadiivka, in Ukraine’s rebel-held Luhansk region, heard the sound of some artillery fire from the direction of the line of contact, but was not able to determine the details of the incident.

The separatists accused government forces of opening fire on their territory four times in the past 24 hours.

Kyiv accused the rebels of firing shells at several locations, including some that struck a kindergarten and others that hit a school where pupils had to flee to the cellar.

Contradicting Russia’s assertions that it has been pulling back, a senior official in US President Joe Biden’s administration said up to 7,000 more troops had moved to the border in recent days, including some arriving on Wednesday, February 16. Russia’s defense ministry released video it said showed more departing units. Maxar Technologies, a private US company that has been tracking the build-up, said satellite images showed that, while Russia has pulled back some military equipment from near Ukraine, other hardware has arrived.

A diplomatic source said a longstanding monitoring mission from the Organization for Security and Cooperation in Europe had recorded multiple shelling incidents along the line of contact in the early hours of Thursday.

Since a 2015 ceasefire brought an end to major combat in the separatist conflict, the OSCE has typically reported dozens of ceasefire violations each day, often minor incidents of test firing weapons. Reports of significant shelling or clashes that lead to injuries or death can occur several time a month.

“Armed forces of Ukraine have crudely violated the ceasefire regime, using heavy weapons, which, according to the Minsk agreements, should be withdrawn,” the separatists said in a statement.

Referring to the rebels, Ukraine’s military said: “With particular cynicism, the Russian occupation troops shelled the village of Stanytsa Lugansk in the Luhansk region. As a result of the use of heavy artillery weapons by terrorists, shells hit the kindergarten building. According to preliminary data, two civilians received shell shock.”

Russia denies planning an invasion of Ukraine, but says it could take unspecified “military-technical” action unless a range of demands are met, including a promise never to admit Kyiv into the NATO alliance.

The West has rejected the main Russian demands but has proposed talks on arms control and other issues. The United States and Europe have threatened sanctions if Russia invades, which Moscow has largely brushed off. – Rappler.com