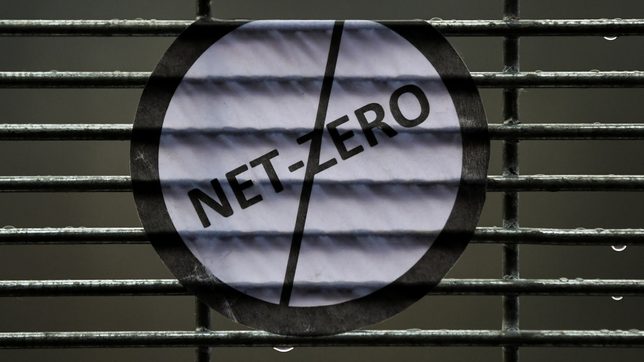 NET-ZERO. A sticker placed on a fence is seen during the UN Climate Change Conference in Glasgow, Scotland, Britain on November 12, 2021.

A new draft agreement for the UN climate conference in Glasgow on Saturday, November 13, maintained a core demand for countries to set more ambitious plans to tackle global warming and asked them to phase out inefficient subsidies for the fossil fuels heating the planet.

The draft proposal, drawn up by the COP26 conference’s British hosts, needs approval from the nearly 200 countries represented, who will wrangle over the details on Saturday. COP26 had been supposed to finish on Friday, November 12.

The proposal retained its core demand for nations to set tougher climate pledges next year, in a bid to bridge the gap between their current plans to cut emissions this decade and the far deeper reductions scientists say are needed to stop global temperatures rising beyond 1.5C and becoming catastrophic.

The draft deal attempts to unblock talks on finance, which have dominated the COP26 summit, by offering reassurances that rich countries, whose emissions are largely responsible for causing climate change, will provide finance to poorer nations that are facing huge costs from worsening storms, droughts and rising sea levels.

It asks rich nations to double by 2025, from 2019 levels, their financial support to help poor countries to adapt to climate impacts. The previous draft deal had used 2020 levels as the baseline, and nations will lock horns on Saturday about whether the latest version would deliver sufficient money.

WATCH: Why #COP26 is going on overtime The draft COP26 deal would also fund an organization dedicated to helping vulnerable countries cope with “loss and damage” – the huge costs they have already incurred from climate change.

It maintained a request that countries phase out “unabated coal power” – referring to power plants that do not use technology to capture their CO2 emissions – as well as “inefficient fossil fuel subsidies.”

But its request that countries “accelerate efforts towards” doing this appeared weaker than a previous draft, which had clearly asked countries to phase them out faster.

It would still be the first mention of fossil fuels in the conclusions of a UN climate summit, if it survives the day’s negotiations and remains in the final text.

Countries including China and Saudi Arabia, both large fossil fuel producers, had attempted to scrub the wording from the text altogether on Friday, delegates close to the negotiations said.

The latest text said countries should support a “just transition” when winding down fossil fuel subsidies – a reference to the need to help workers and regions dependent on fossil fuel industries transition into cleaner sectors and jobs. – Rappler.com