FLOODING IN PAKISTAN. A flood victim pushes his donkey cart on flooded highway, following rains and floods during the monsoon season in Sehwan, Pakistan, September 16, 2022.

Facebook Twitter Copy URL
Copied
Pakistan is playing a high-profile role at the COP27 summit in Egypt this year, serving as one of two co-chairs invited by conference host Egypt, with the other being Norway

SHARM EL-SHEIKH, Egypt – Pakistan will not be satisfied unless UN climate summit negotiators unlock emergency cash for the country to rebuild after this year’s devastating floods, its climate minister said Thursday, November 10.

“The dystopia has already come to our doorstep,” the country’s climate minister, Sherry Rehman, told Reuters in an interview on the sidelines of the COP27 summit in Egypt.

She lamented the glacial pace of climate diplomacy, saying it cannot meet the needs of a country struggling to recover from climate-fueled flooding that caused more than $30 billion in economic losses.

“The political advances we make here will have very little meaning on the ground unless there is a transfer of resources that shifts the needle on how people face the future,” she said.

Pakistan is playing a high-profile role at the COP27 summit in Egypt this year, serving as one of two co-chairs invited by conference host Egypt, with the other being Norway.

To date, only about a third of climate finance delivered has gone toward adaptation projects, and the full sum promised – $100 billion per year – has never been paid in full. Last year saw just over $80 billion transferred.

COP27: Which countries have offered ‘loss and damage’ funds? 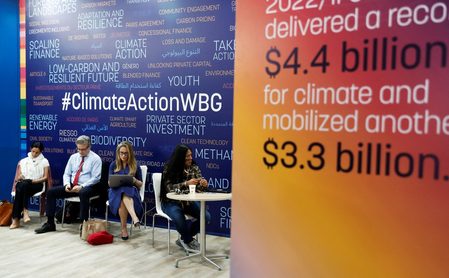 Pakistan was key to getting the thorny issue of “loss and damage” onto the official UN summit agenda – a diplomatic coup after decades of resistance from rich nations. The move opened the door for talks to address vulnerable countries’ demand to be compensated when hit by climate-fueled disasters.

But incremental progress made in these discussions, which can go on for years, still wouldn’t be enough for Pakistanis back at home to consider the talks a win, she said.

“If I say, ‘well, adaptation has now been put as a priority’…or ‘there’s a a 50-50 allocation in terms of priority between mitigation-adaptation’, it’s not going to mean very much to somebody whose house has been burned down by a forest fire or somebody who has lost a family member in the floods,” she said.

Rehman said that any new money pledged either for loss and damage or for adaptation needs to be followed up “with speed and agility”, because countries like Pakistan have no time to waste.

She said she supported the call by the United States, Britain and other countries to overhaul international financial institutions to better respond to the disasters expected as the atmosphere continues to warm.

“There is a recognition [at COP27] that we are facing a new climate normal for the world,” she said. “But there still isn’t a recognition that the financial system that’s been running the world…is not going to be able to bail out the millions that are dying and in need.” – Rappler.com