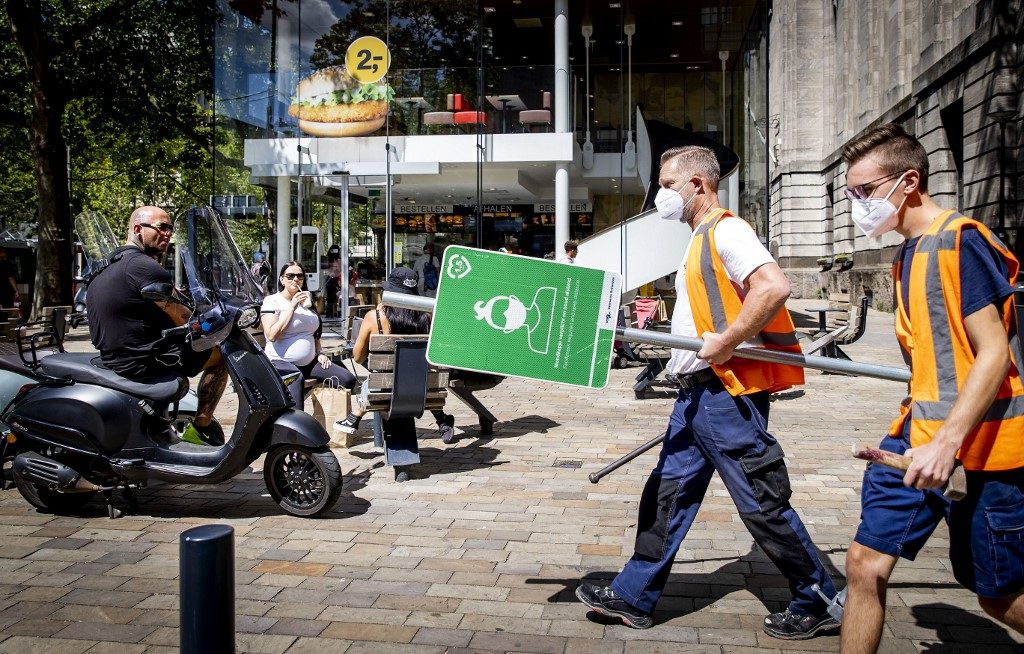 SIGN. City employees carry a sign with information about mask-wearing at Meent in Rotterdam, on August 4, 2020, amid the COVID-19 pandemic.

Facebook Twitter Copy URL
Copied
Canada becomes the latest nation to approve the Pfizer-BioNTech vaccine, a day after Britain gave out the first approved vaccine jabs in the Western world

Documents related to the Pfizer coronavirus vaccine were illegally accessed during a cyberattack at the EU regulator, the company said Wednesday, December 9, as Germany and other northern hemisphere countries grappled with a winter surge in the pandemic.

The Amsterdam-based European Medicines Agency (EMA) reported the cyberattack as European countries eagerly await a vaccine, including Germany where Chancellor Angela Merkel is pushing for tougher action against a second wave of COVID-19 that is proving deadlier than the first there.

While the EMA did not give details on the attack, Pfizer and BioNTech said documents relating to their vaccine candidate had been accessed, but that “no systems have been breached in connection with this incident.”

The EMA has promised to reach a decision on conditional approval for Pfizer/BioNTech’s vaccine by December 29, with a ruling on Moderna’s version to follow by January 12.

Canada on Wednesday became the latest nation to approve the Pfizer-BioNTech vaccine, a day after Britain gave out the first approved vaccine jabs in the Western world.

The United States is expected to follow suit within days, after a Food and Drug Administration advisory panel meets on the issue Thursday.

But a top government scientist said the FDA would probably ask people with a known history of severe allergies not to take it – after two health care workers in Britain needed treatment for allergic reactions. 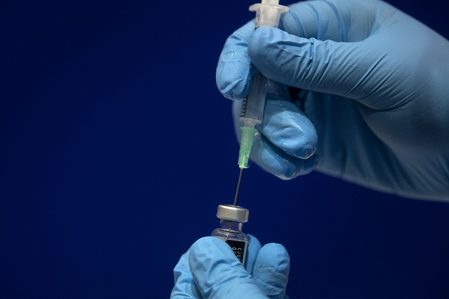 The cyberattack comes after Britain accused Kremlin-linked hackers in July of targeting labs researching coronavirus vaccines and after a US newspaper reported that cybercriminals had tried to attack several pharmaceutical firms developing vaccines.

The Russian space agency said on Wednesday it planned to offer the Sputnik coronavirus vaccine to cosmonauts but insisted it would be on a voluntary basis.

Israel accepted its first shipment of the Pfizer vaccine on Wednesday, Prime Minister Benjamin Netanyahu promising to be the first to be injected – although the vaccine has yet to pass regulatory hurdles there.

“What is important to me is that Israeli citizens get vaccinated,” he said. “I want to serve as an example to them.”

AU Commission chairman Moussa Faki Mahamat meanwhile said Wednesday that Africa must be among the first beneficiaries of the vaccines, adding that “those who have the (financial) means must not monopolize the vaccines.”

The virus has now killed more than 1.5 million worldwide since it emerged in China late last year. Change ‘for the better’

In Germany, where the daily death toll hit a new high of 590 on Wednesday, Merkel urged regions to take more drastic action to curb the virus spread, after state leaders agreed to ease what are already comparatively modest social restrictions for the Christmas holidays.

Merkel has been in no mood for celebration, repeatedly urging regional leaders who have responsibility for health policies to clamp down more strongly.

“If we have too many contacts before Christmas and it ends up being the last Christmas with the grandparents, then we’d really have failed,” she said.

Two weeks ago, Germany’s states agreed rules limiting social mixing to 5 people but agreed to double the limit to 10 for the holiday season – something Merkel argued against.

The United States is also mired in political rows over an epidemic that has killed more than 280,000 — the world’s heaviest toll.

President Donald Trump signed an executive order on Tuesday that sought to guarantee access to vaccines for all Americans, but critics immediately queried what legal force it could have given drug firms have already signed contracts with other countries.

Joe Biden, who will take over from Trump in January and unveiled a plan for 100 million jabs in his first 100 days, has urged Congress to come up with funding to prevent vaccine distribution from stalling.

As America’s politicians grappled over resources to fight COVID-19, a new study showed that the country’s 651 billionaires have seen their wealth rise by more than $1 trillion since the start of the pandemic, according to the Institute for Policy Studies and Americans for Tax Fairness.

At the other end of the spectrum, experts are warning that hunger in the Philippines has reached new levels thanks in part to restrictions that have crippled the economy and left many without livelihoods. – Rappler.com