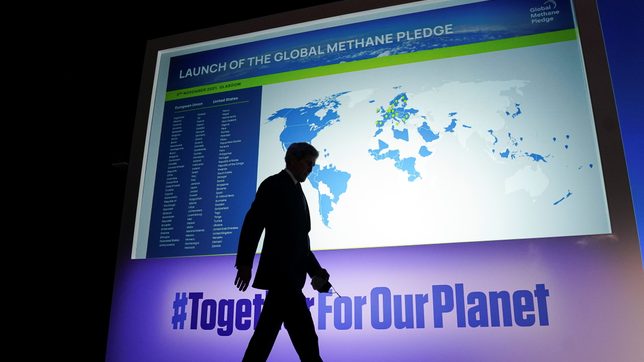 Facebook Twitter Copy URL
Copied
(2nd UPDATE) Here are some of the pledges delivered so far this week at the UN climate conference, COP26, in Glasgow, Scotland

Here are some of the pledges made so far this week at the UN climate conference, COP26, in Glasgow, Scotland:

More than 100 global leaders pledged to halt and reverse deforestation and land degradation by the end of the decade, a promise underpinned by $19 billion in public and private funds to invest in protecting and restoring forests.

The statement was initially backed by leaders of countries including Brazil and Democratic Republic of Congo and Indonesia, which collectively account for 85% of the world’s forests.

But Indonesia’s environment minister later dismissed the plan as “inappropriate and unfair.”

However, forest degradation and loss has been aggravated by fires that in some places are being fueled by climate change.

Those seeking to conserve forests also have to deal with the massive commercial incentives to fell trees.

Under the far-right government of President Jair Bolsonaro in Brazil, illegal loggers have become emboldened in the Amazon, the world’s largest tropical rainforest.

Indigenous people from the region have sent 40 envoys to the COP26 talks to highlight the need to protect their territories.

About 100 countries have joined an effort led by the United States and the European Union to cut emissions of the climate-warming gas methane by 30% by 2030, compared with 2020 levels.

Methane has a shorter life in the atmosphere than the biggest greenhouse gas CO2, but has around 80 times more planet-warming potency. That means quickly reducing methane emissions from the fossil fuel industry and agriculture could have a big impact in the short term.

But big methane emitters Russia, China and India have not yet signed up, while Australia has rejected the idea of joining.

COP26 aims to keep alive a target of capping global warming at 1.5 degrees Celsius (2.7 Fahrenheit) above pre-industrial levels to avert the most dire climate change impacts.

So far, the world is far off track. A UN report released days before the Glasgow talks said current pledges to cut climate-warming emissions put the planet on course for a 2.7ºC temperature rise this century.

Scientists say the world must halve emissions by 2030, and reach net-zero by 2050, to avert the worst impacts of global warming. (READ: Forget net-zero: Meet the small-nation, carbon-negative club)

India’s prime minister on Monday, November 1, said the country, one of the world’s biggest carbon emitters, after China and the United States, aimed to reach net zero by 2070.

For years, finance has been a major sticking point at the UN talks, with rich nations having failed to meet a 2020 deadline to deliver $100 billion of funds a year to help developing nations transition away from fossil fuels and prepare for climate impacts.

The pledge, made in 2009, is an acknowledgement that developed nations have contributed most emissions to the atmosphere and so bear more responsibility for reversing course.

Last week, the British COP president, Alok Sharma, said the goal would be met only in 2023. But on Tuesday, November 2, US climate envoy John Kerry suggested 2022 could be achievable.

Banks, insurers and investors with $130 trillion at their disposal have pledged to put combating climate change at the center of their work, and gained support in the form of efforts to put green investing on a firmer footing.

In theory, $130 trillion is more than enough to finance the world’s transition to a greener economy, but it remains to be seen how many of the trillions will be channeled into action that reduces emissions.

Regulators are working on establishing uniform standards to break through “greenwashing,” whereby companies portray their business as climate-friendly when in reality it is not.

Major coal users Indonesia, Poland, Vietnam and others pledged to phase out their use of coal-fired power and stop building plants, a deal COP26 host Britain said put the end of coal use “in sight.”

Twenty governments have committed to stop public financing for fossil fuel projects abroad by the end of next year, although they do not include some of the world’s most coal-dependent nations, including Australia, China and India.

Dozens of nations pledged to do more to protect nature and overhaul farming, amid misgivings about past failures.

Sharma said the pledges included $4 billion in public sector investment which would help spur innovation such as developing crops resilient to droughts, floods and heatwaves that could benefit “hundreds of millions of farmers.”

At the start of the second week of COP26, governments will push for agreement on how to help vulnerable countries deal with global warming and compensate them for damage already done, a test of whether developing and rich nations can end a standoff over cash for climate change.

Britain, which is hosting the COP26 meeting, will again try to set the pace, announcing 290 million pounds ($391 million) in new funding, including support for countries in the Asia Pacific region to deal with the impact of global warming.

That will come, the British government says, on top of the “billions in additional international funding” already committed by rich countries such as the United States, Japan and Denmark for adaption and resilience in vulnerable nations. – Rappler.com