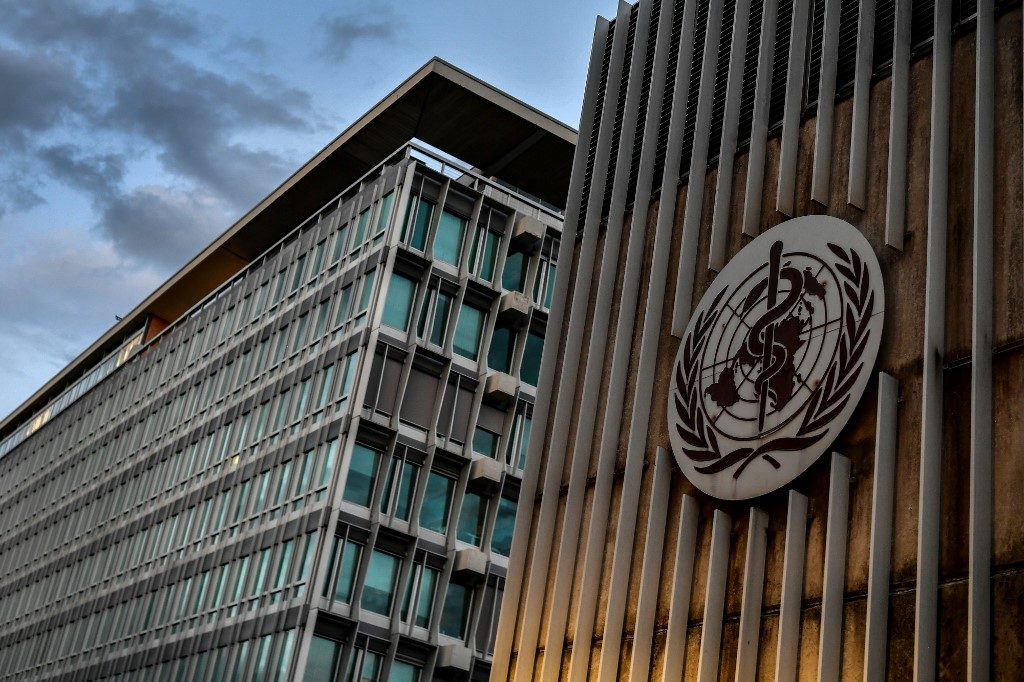 WHO OFFICE. A photo taken in the late hours of August 17, 2020 shows a sign of the World Health Organization (WHO) at their headquarters in Geneva amid the COVID-19 outbreak, caused by the novel coronavirus.

Facebook Twitter Copy URL
Copied
'I think there will be a bit of a honeymoon,' an international relations professor says, warning though that the blissful period could be 'short'

After years of US disengagement and confrontation, international organizations in Geneva appeared to breathe a collective sigh of relief at Joe Biden’s presidential election win – but the anticipated honeymoon could be short.

“I think everyone is basically waiting with open arms for the US government to come back,” said Manfred Elsig, an international relations professor at the World Trade Institute of Bern University.

Republican President Donald Trump’s administration has been a traumatic experience for international organizations that in many cases were created by the United States and accustomed to strong US support and leadership.

In Geneva alone, the United States has, under Trump, cut its ties to the UN’s top rights body, hamstrung the World Trade Organization, and begun withdrawing from the World Health Organization even as the body strives to coordinate the global response to Covid-19.

After the election was called for Democratic Party candidate Biden last weekend, “there was a huge sigh of relief” within the international organizations, a Geneva trade official told Agence France-Presse (AFP), asking not to be named.

Observers expect Washington under Biden to re-engage with the international community and its institutions, and to resume discussions on a number of issues blocked by his predecessor.

“I think there will be a bit of a honeymoon,” Elsig said, warning though that the blissful period could be “short.”

The narrative pushed hard for 4 years that international organizations are taking advantage of the US remains deeply engrained, especially among Republicans, he said.

“Every step that the Biden administration will take towards engaging with the world and international organizations will be critically monitored in the United States.”

While plenty of stumbling blocks remain, there is optimism in Geneva that discussions within international forums will become more constructive.

The WHO has particular reason to celebrate, after suffering relentless US attacks in recent months.

Accusing the United Nations health agency of mishandling the COVID-19 response and of kowtowing to China, Trump has begun withdrawing the United States – traditionally the WHO’s top donor – from the organization.

But Biden said in a tweet: “On my first day as president, I will rejoin the WHO and restore our leadership on the world stage.”

The WHO did not wish to comment on its expectations for a Biden presidency, but the agency’s chief Tedros Adhanom Ghebreyesus struck an upbeat tone in his congratulatory tweet to the president-elect.

“I look forward to working with you and your teams. Crises like the COVID-19 pandemic show the importance of global solidarity in protecting lives and livelihoods,” he said.

The World Trade Organization will certainly also welcome a changing of the guard in Washington.

The global trade body is facing multiple crises, with the United States stubbornly blocking its budget, crippling its dispute settlement system and now impeding the selection of its new leader, having been without a captain since August.

A second Geneva trade official said Biden could conceivably reverse course and give approval to Nigeria’s Ngozi Okonjo-Iweala becoming the first woman and first African to lead the WTO.

But a number of other issues – including Washington’s dislike for its appeals body, which it accuses of overreach – pre-date Trump.

Nevertheless, even if some fundamental positions may remain unchanged, there will not be the same “gratuitous aggressiveness,” the official said.

While international organizations can now perhaps look forward to more constructive engagement with Washington, Elsig stressed that not all of Trump’s attacks had been bluster.

“Maybe 10 percent of the criticism is to be taken seriously,” he said, pointing to growing agreement that reforms at the WHO and other organizations were needed.

In the short term, he said, Biden should enjoy goodwill among international partners and will be “in a strong position” to push legitimate demands for change.

But Elsig said he remained “really worried about the discourse in the US.”

“If the Trump approach continues in the Republican Party… then we don’t have long-term support in the United States for international organizations.

“That is a huge problem.” – Rappler.com