GOD. A commuter waits for a taxi driver at the Baragwanath taxi rank, amid the coronavirus disease (COVID-19) outbreak, in Soweto, South Africa, December 29, 2020.

Facebook Twitter Copy URL
Copied
'Some [rich countries] acquired up to 4 times what their population needs...to the exclusion of other countries,' says Ramaphosa, who chairs the African Union

With Africa struggling to secure sufficient vaccines to start countrywide inoculation programs for its 1.3 billion people, the head of the international Gavi vaccine alliance meanwhile said the surplus doses that richer countries had ordered ran into the hundreds of millions.

Ramaphosa, who chairs the African Union and whose nation has recorded nearly half the continent’s coronavirus deaths, said the world needed those who had hoarded doses to release them for others to use.

“The rich countries of the world went out and acquired large doses,” he told a virtual meeting of the World Economic Forum (WEF). “Some even acquired up to 4 times what their population needs…to the exclusion of other countries.”

The African Union this month secured 270 million shots for the continent to supplement 600 million doses from the COVAX vaccine distribution scheme co-led by the WHO and Gavi.

Those doses are expected to become available this year but none have arrived yet, while parts of Europe, Asia, and the Americas are well into their vaccination programs.

Britain has ordered 367 million doses of 7 different vaccines – some already approved and some candidate drugs – for its population of roughly 67 million, while the European Union has secured nearly 2.3 billion doses for its 450 million people. 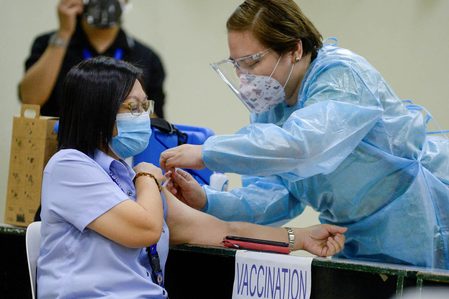 “But we’ve got to make sure that there’s broad availability of vaccines for the rest of the world too,” he told an online event organized by think-tank Chatham House, “both by the funding, and by the very open and generous approach AstraZeneca have taken to the global distribution of the Oxford vaccine.”

Britain has touted its position as a leading donor to COVAX, despite signing large vaccine supply deals outside the facility.

Gavi CEO Seth Berkley estimated that richer countries had ordered more than 800 million surplus doses and had options for a further 1.4 billion.

“The numbers are really quite striking…. People didn’t know which vaccines were going to work, if any of them were going to work, so they took multiple shots on goal,” Berkley told another session of the WEF, which is being held virtually this year, rather than in the Swiss ski resort of Davos, due to the pandemic.

He said COVAX was ready to receive donations of surplus doses, buy them or take a spot in a manufacturing queue to make them available equitably.

South Africa, which as an upper-middle-income country has to self-fund its participation in COVAX, has recorded more than 1.4 million COVID-19 cases and 41,000 deaths, out of more than 3.4 million cases and 86,000 deaths continent-wide.

It is scheduled to receive 1.5 million doses of the AstraZeneca/Oxford University vaccine produced in India in January and February. – Rappler.com