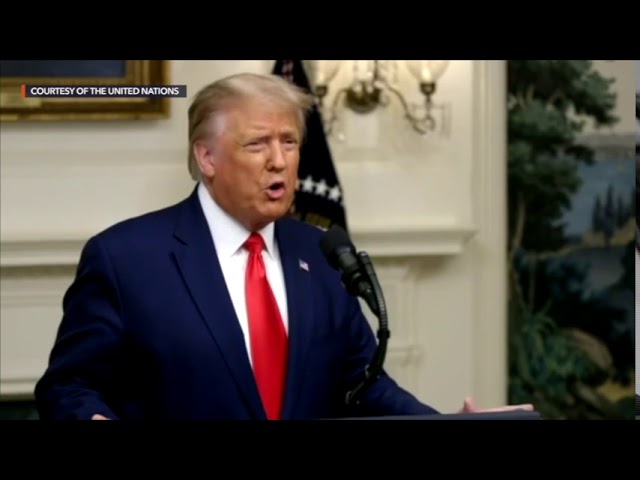 US President Donald Trump angrily cast blame on China over the coronavirus pandemic in an address on Tuesday, September 22, before the United Nations, whose chief warned against a new “Cold War” between the two powers.

At a General Assembly held almost entirely virtually due to COVID-19, Trump delivered a speech in election campaign mode, even using his loaded term “China virus” as the US death toll crossed the grim milestone of 200,000.

“We must hold accountable the nation which unleashed this plague onto the world – China,” Trump said in a recorded address to the General Assembly, where each nation was represented by a single, masked delegate.

Trump, who pulled the United States out of the Paris climate accord, attacked China for its carbon emission as well as dumping of plastic.

“Those who attack America’s exceptional environmental record while ignoring China’s rampant pollution are not interested in the environment. They only want to punish America. And I will not stand for it,” he said.

Trump renewed his criticism of China’s role in the respiratory disease, news of which was suppressed when cases first emerged late last year in Wuhan.

“The Chinese government, and the World Health Organization – which is virtually controlled by China – falsely declared that there was no evidence of human-to-human transmission,” Trump said, referring to initial statements by the UN health body that it later revised.

Trump has given notice that the United States is pulling out of the World Health Organization.

Washington has been the greatest contributor to the health body, which has tackled polio, malaria and other illnesses around the world

Critics say Trump is trying to shift blame for his handling of COVID-19 that has taken a higher toll in the United States than any other country.

His Democratic rival in November 3 elections, Joe Biden, has vowed to keep the United States in the WHO if he wins.

Leaders were asked to send in videos days in advance in a partly successful bid to avoid technical glitches, meaning Chinese President Xi Jinping could not respond to Trump’s remarks.

But China’s ambassador to the United Nations, Zhang Jun, convened reporters to describe Trump’s tone as “incompatible with the general atmosphere” of the world body.

“When the international community is really fighting hard against the COVID-19, the United States is spreading a political virus here in the General Assembly,” he said.

“If we do have to hold anyone accountable, it should be the United States held accountable for losing so many lives with their irresponsible behavior.”

Xi, in a mild-mannered speech delivered before a painting of the Great Wall, warned the world not to “politicize” the fight against coronavirus.

Xi said that China would contribute another $15 million to a UN fund on coronavirus.

“China has no intention of entering a Cold War,” he said, urging the world to avoid “falling into the trap of a clash of civilizations.”

UN Secretary-General Antonio Guterres, opening the General Assembly, also warned that “we must do everything to avoid a new Cold War.”

“We are moving in a very dangerous direction. Our world cannot afford a future where the two largest economies split the globe in a Great Fracture – each with its own trade and financial rules and internet and artificial intelligence capacities,” Guterres said.

The Trump administration has launched a global campaign against the influence of China, pushing back on its claims in the South China Sea and warning nations of the risks of accepting its lavish infrastructure spending.

Russian President Vladimir Putin in his speech hailed the safety of a COVID-19 vaccine unveiled by Moscow – which has drawn wide skepticism among Western scientists.

Putin called for universal access to the vaccine and offered to give it for free to UN staff.

Guterres in his address criticized nationalist approaches to the coronavirus, without naming Trump or other world leaders.

“Populism and nationalism have failed. Those approaches to contain the virus have often made things manifestly worse.”

Brazilian President Jair Bolsonaro, who has contracted COVID-19 himself, used his address to accuse his nation’s media of spreading panic.

The UN General Assembly in normal years draws about 10,000 people from around the world, a prospect that is unthinkable at a time when nations have imposed strict entrance requirements to prevent the spread of COVID-19, which has claimed nearly 950,000 lives globally. – Rappler.com