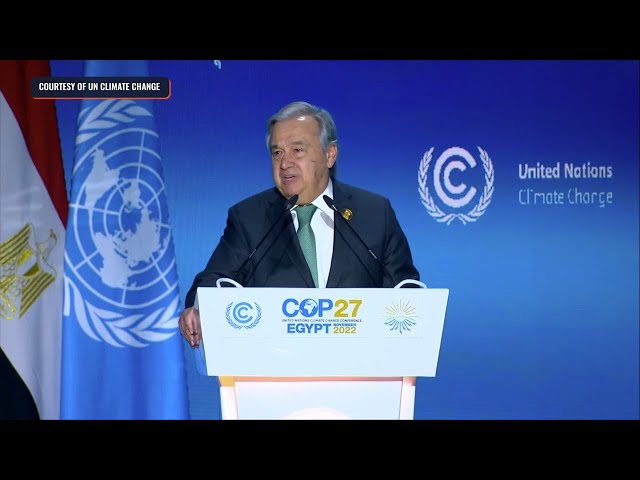 The speech set an urgent tone as governments sit down for two weeks of talks on how to avert the worst of climate change, even as they are distracted by Russia’s war in Ukraine, rampant consumer inflation and energy shortages.

He called for a pact between the world’s richest and poorest countries to accelerate the transition from fossil fuels and funding to ensure poorer countries can reduce emissions and cope with the climate impacts that have already occurred.

“The two largest economies – the United States and China – have a particular responsibility to join efforts to make this pact a reality,” he said.

Despite decades of climate talks – the Egypt COP is the 27th Conference of the Parties – progress has been insufficient to save the planet from excessive warming as countries are too slow or reluctant to act, he noted.

“Greenhouse gas emissions keep growing. Global temperatures keep rising. And our planet is fast approaching tipping points that will make climate chaos irreversible,” he said. “We are on a highway to climate hell with our foot on the accelerator.”

Former US vice president Al Gore, also speaking at the event, said global leaders have a credibility problem when it comes to climate change. He criticized developed nations’ ongoing pursuit of gas resources in Africa, which he described as “fossil fuel colonialism.”

“We have a credibility problem all of us: We’re talking and we’re starting to act, but we’re not doing enough,” Gore said.

“We must see the so-called ‘dash for gas’ for what it really is: a dash down a bridge to nowhere, leaving the countries of the world facing climate chaos and billions in stranded assets, especially here in Africa,” he said.

Immediately after Guterres’ speech, United Arab Emirates President Sheikh Mohammed bin Zayed al-Nahya took the stage and said his country, a member of the Organization of the Petroleum Exporting Countries, would continue to produce fossil fuels for as long as there is a need.

“The UAE is considered a responsible supplier of energy and it will continue playing this role as long as the world is in need of oil and gas,” he said.

The UAE will host next year’s UN conference, which will attempt to finalize agreements made last year in Britain and at this year’s Egyptian talks.

Many countries with rich resources of oil, gas, and coal have criticized the push for a rapid transition away from fossil fuels arguing it is economically reckless and unfair to poorer and less developed nations keen for economic growth.

Signatories to the 2015 Paris climate agreement had pledged to achieve a long-term goal of keeping global temperatures from rising by more than 1.5°C above pre-industrial levels, the threshold at which scientists say climate change risks spinning out of control.

Guterres said that goal will only stay alive if the world can achieve net zero emissions by 2050. He asked countries to agree to phase out the use of coal, one of the most carbon-intense fuels, by 2040 globally, with members of the Organisation for Economic Cooperation and Development hitting that mark by 2030.

The head of the International Monetary Fund told Reuters on the sidelines of the conference that climate targets depend on achieving a global carbon price of at least $75 a ton by the end of the decade, and that the pace of change in the real economy was still “way too slow.”

The World Trade Organization, meanwhile, said in a report published on Monday that it should tackle trade barriers for low carbon industries to address the role of global trade in driving climate change. – Rappler.com