‘We need to act now’: UK’s Johnson to send climate alert at COP26 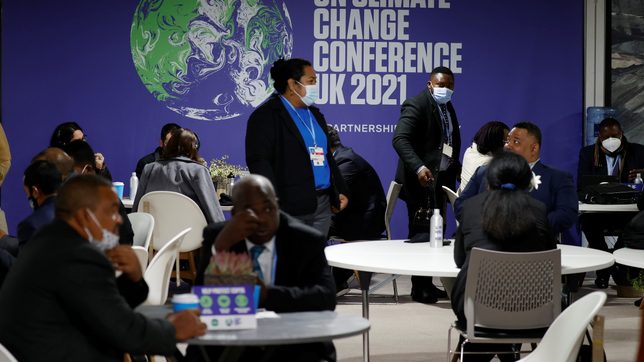 COP26. Delegates wear protective face masks as they gather in a communal area during the UN Climate Change Conference in Glasgow, Scotland, Britain, on October 31, 2021.

British Prime Minister Boris Johnson will tell a climate summit on Monday, November 1, that “it’s one minute to midnight and we need to act now” as he calls on leaders to go beyond their pledges to developing nations and act on “coal, cars, cash and trees.”

Hosting the United Nations’ COP26 summit, Johnson is hoping to keep alive a target of capping global warming at 1.5 degrees Celsius above pre-industrial levels – the limit scientists say would avoid its most destructive consequences.

But it will be no easy task as Johnson found at a meeting of leaders from 20 of the word’s biggest economies over the weekend. The Group of 20 agreed on the need for “meaningful and effective” action to limit global warming but offered few concrete commitments.

“Humanity has long since run down the clock on climate change. It’s one minute to midnight and we need to act now,” Johnson will tell the opening ceremony, according to excerpts of his speech released by his office.

“If we don’t get serious about climate change today, it will be too late for our children to do so tomorrow.”

Saying Britain wanted to lead by example, Johnson will make a commitment to increase the finance the country provides to developing countries, which often face the worst environmental impacts, by 1 billion pounds by 2025 to tackle climate change.

Britain says it has doubled its International Climate Finance commitment to 11.6 billion pounds over five years in 2019, and the new pledge would take that to 12.6 billion by 2025, if the country’s economy grows as forecast.

US President Joe Biden has said he wants his country to provide $11.4 billion a year.

At the G20 summit in Rome, Johnson mounted attempts to make some countries to agree to do more before the UN meeting.

He called on Italian Prime Minister Mario Draghi to go further on his country’s climate finance commitments and asked Australia and China to do more to reduce their dependence on coal, the most polluting energy source if emissions are not captured and stored underground.

“We have to move from talk and debate and discussion to concerted, real-world action on coal, cars, cash and trees. Not more hopes and targets and aspirations… but clear commitments and concrete timetables for change,” Johnson will say.

“We need to get real about climate change and the world needs to know when that’s going to happen.” – Rappler.com