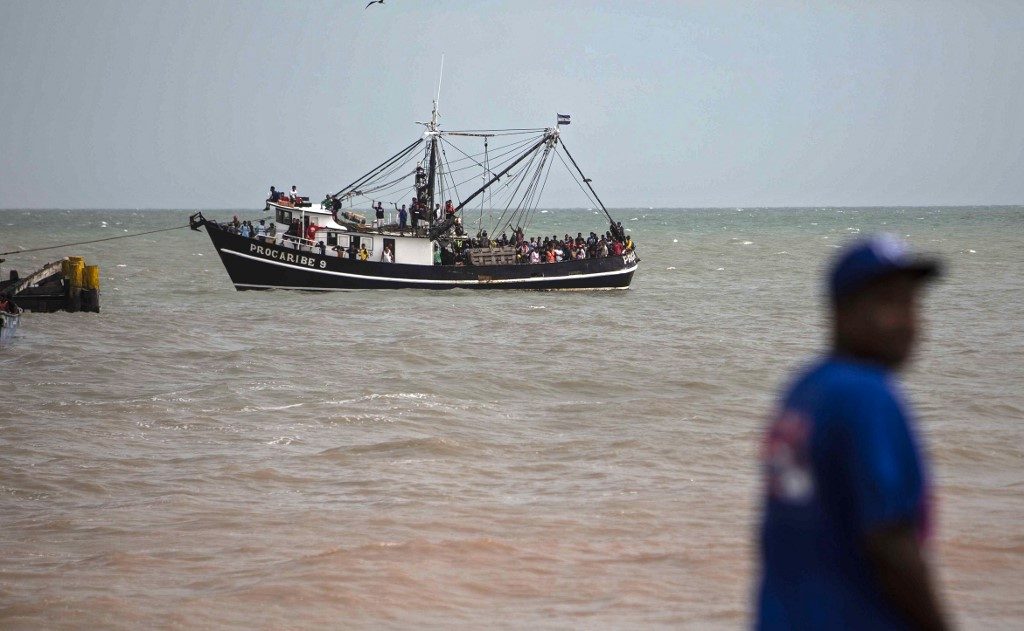 Navy members help evacuate people on a boat from the Karata and Wawa Bar communities ahead of the arrival of Hurricane Iota in Bilwi, Puerto Cabezas, Nicaragua, on November 15, 2020. - Hurricane Iota is forecast to strengthen to an "extremely dangerous" Category Four by the time it makes landfall in Central America on Monday, the US National Hurricane Center warned, two weeks after powerful storm Eta devastated much of the region and left more than 200 people dead or missing. (Photo by STR / AFP)

Iota was upgraded to Category 5 – the highest level – as it moved westward over the Caribbean towards the Nicaragua-Honduras border.

The hurricane would “bring catastrophic wind, life-threatening storm surge and torrential rainfall,” the NHC said, adding “on the forecast track, the core of Iota will make landfall within the hurricane warning area in northeastern Nicaragua tonight.”

It was packing maximum sustained winds of 160 miles (260 kilometers) per hour with higher gusts recorded.

Category 5 hurricanes destroy many homes, wreck power supplies and most of the affected area is “uninhabitable for weeks or months.”

So many, that by October, with the arrival of tropical storm Wilfred in the eastern Atlantic, meteorologists had already used every name on the season’s list, causing them to move to the Greek alphabet for names, which had not been necessary since 2005.

Iota is the ninth letter of the Greek alphabet.

Communities on Monday prepared for the worst along the Caribbean coast.

Honduras, Guatemala and Nicaragua announced evacuations last week, even as the region was still reeling from the devastation inflicted by previous storm Eta.

In the Nicaraguan coastal city of Bilwi, residents were desperately trying to secure roofs of flimsy wooden homes with the same zinc sheets ripped off by Eta.

Many people were wrapping their belongings in plastic bags to protect them from the coming rains.

“We are worried, nervous. Psychologically we are not doing well, because losing our things and starting over is not easy. Some of us have old little houses and we risk losing everything,” Silvania Zamora told Agence France-Presse.

Authorities have ordered people to leave the area, but many are refusing, fearing COVID-19.

“Some of us prefer to stay and die in our homes. There has never been a repeat hurricane in such a short time, but what can we do against the force of God and nature,” Zamora said.

Evacuations were underway in communities along the border with Honduras, he said.

Authorities on Friday, November 13, sent boats to evacuate the community in Cabo Gracias a Dios, where the Coco River flows into the Caribbean along the “Mosquito Coast.”

The NHC warned that Iota would deposit 10 to 20 inches (250 to 500 mm) of rain on Honduras, northern Nicaragua, southeast Guatemala and southern Belize, with isolated totals of up to 30 inches.

“This rainfall would lead to significant, life-threatening flash flooding and river flooding, along with mudslides in areas of higher terrain,” it said. – Rappler.com