GRIEVING PARENTS. Parents hold up posters of their children during a demonstration to commemorate the sixth anniversary of the disappearance of the 43 Ayotzinapa students in Mexico City, Mexico, on September 26, 2020.

MEXICO CITY, Mexico – A Mexican judge ruled that there was sufficient evidence to hear charges against the country’s former attorney general Jesus Murillo in relation to his alleged role in the disappearance of 43 students in 2014 and subsequent investigation, judicial authorities said Wednesday.

Murillo, who was arrested on Friday in the first high-level detention of an official for involvement in the case, is accused of torture, forced disappearance, and obstruction of justice.

Murillo oversaw the highly criticized inquiry into the incident in which 43 students from the Ayotzinapa Rural Teachers’ College went missing in the southwest state of Guerrero.

The arrest comes after Mexico’s top human rights investigator called the disappearances “a state crime” last week, marking one of the worst human rights abuses in the country’s history.

International experts have said Murillo’s investigation was riddled with missteps and abuses, including torture of witnesses. 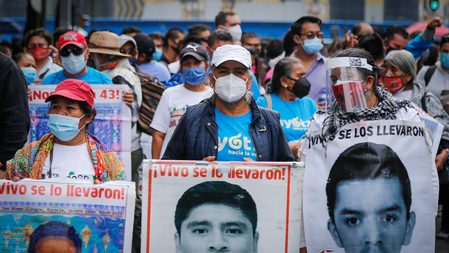 Murillo defended himself during his indictment hearing Wednesday, according to local media.

“For seven years they have been looking for an alternative (account of events), they have invented many, and they all fall apart,” Murillo said.

“I can accept some mistakes, mistakes could be made. I can accept things that were done wrong, but no one has been able to bring down (my investigation),” he added.

President Andres Manuel Lopez Obrador took office at the end of 2018, promising to look into the case. Last week, a judge released nearly 100 arrest warrants related to the case, including Murillo’s, prosecutors said.

The remains of only three of the students have ever been definitively identified. – Rappler.com