FOR CLEAN HANDS. A worker of the Heath Secretariat wears a face mask and protective suit as she distributes antibacterial gel at the 'Central de Abasto' wholesale market in Mexico City on October 27, 2020, amid the new coronavirus pandemic.

Facebook Twitter Copy URL
Copied
Mexico has the world's fourth-highest death toll from the virus behind the United States, Brazil, and India

Mexico surpassed one million COVID-19 cases on Saturday, November 14, registering 5,860 new infections over the previous day in a country with one of the world’s highest death tolls from the virus, the government said.

A total of 1,003,253 people have now tested positive for the virus in Mexico, said health ministry official Ricardo Cortes.

The death toll meanwhile reached 98,259, including 635 registered over the past day, he added.

Mexico has the world’s fourth-highest death toll from the virus behind the United States, Brazil, and India, according to an Agence France-Presse (AFP) tally based on official figures.

It also has the 11th highest number of infections.

Cases have been spiking in a number of areas of the country. 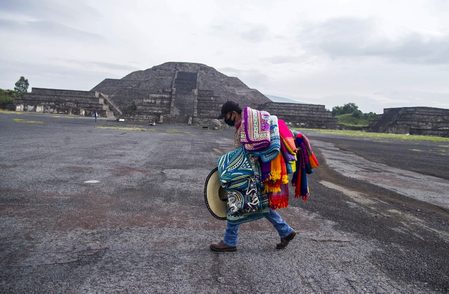 The government earlier declared a lockdown on March 23, although essential economic activities remained open, with no sanctions for non-compliance.

The mayor of Mexico City, Claudia Sheinbaum, announced on Friday the closure of bars for 15 days and earlier closing times for restaurants, cinemas and gyms due to the spike in infections and hospitalizations over the last week.

Sheinbaum also said that daily tests will be increased to 10,000.

The capital has seen an increase in infections since mid-October and remains the epicenter of the pandemic in Mexico. – Rappler.com