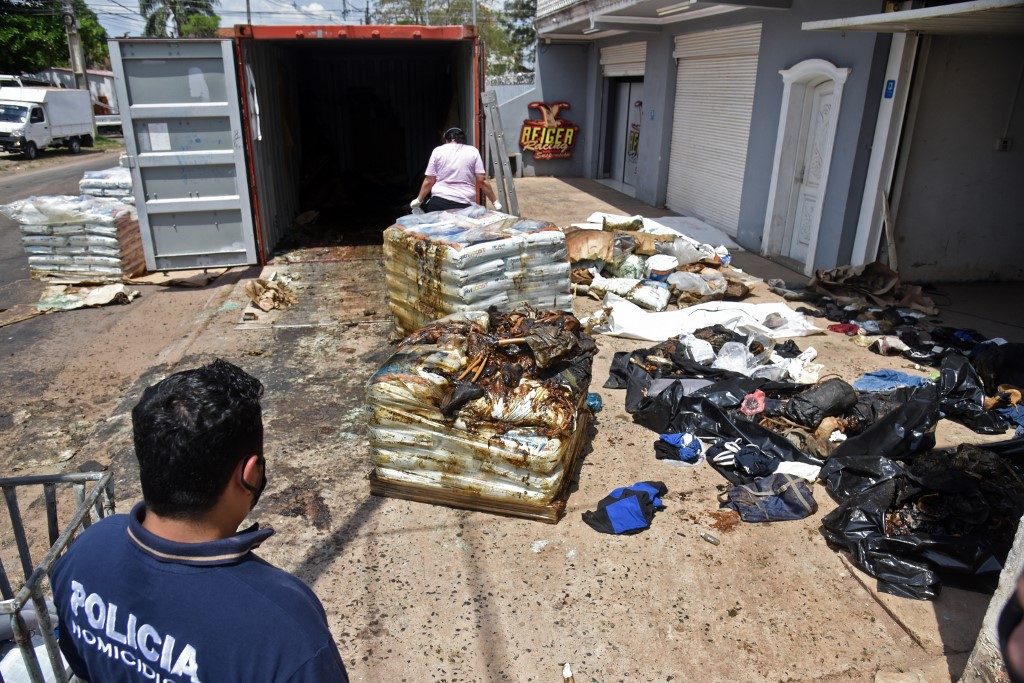 DEADLY SHIPMENT. EDITORS NOTE: Graphic content. A policeman and a forensic expert are seen next to parts of decomposed bodies found inside a container coming from Serbia, in Asuncion, on October 23, 2020. - At least seven corpses were found in a fertiliser shipment coming from Serbia. Photo by Daniel Duarte/AFP

Facebook Twitter Copy URL
Copied
The remains of the 7, discovered by employees of an agricultural company in the capital Asuncion, are likely those of illegal migrants, prosecutor Marcelo Saldivar says

Paraguayan police have found the remains of 7 people in an advanced stage of decomposition in a container of fertilizer that arrived in the country from Serbia, officials said Friday, October 23.

The remains, discovered by employees of an agricultural company in the capital Asuncion, were likely those of illegal migrants, prosecutor Marcelo Saldivar told reporters.

Traces of food discovered near the remains suggested the group was “prepared for a short trip,” Saldivar told reporters.

Asphyxiation was the likely cause of death, forensic doctor Pablo Lemir said, adding that 3 of the 7 were from Morocco and one was from Egypt.

The remains appeared to be adult and male, he said, adding that the fertilizer could have sped up the process of decomposition.

Personal items discovered on the bodies included a telephone card in the cyrillic script used in Serbia.

Saldivar said Paraguayan authorities would seek contact with authorities in Serbia through Interpol to trace the remains. – Rappler.com