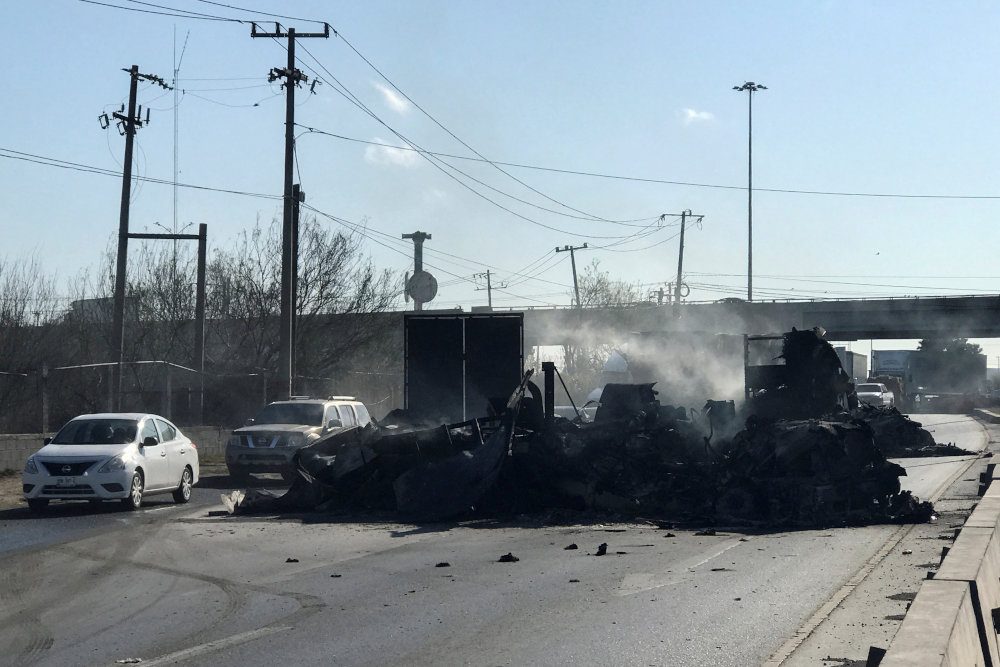 IN NUEVO LAREDO. The charred wreckage of a trailer, which was set ablaze by suspected gang members following the detention of one of its leaders, is pictured in Nuevo Laredo, Mexico on March 14, 2022.

MEXICO CITY, Mexico – The US consulate in the Mexican border city of Nuevo Laredo will close temporarily after it was hit by gunfire overnight, and trailers were set ablaze on roads downtown after a gang leader’s arrest, authorities said on Monday, March 14.

Shots against the consulate and Mexican military premises were reported amid gunfighting and pursuits in parts of the city that lies opposite Laredo, Texas, the ministry of public security in the state of Tamaulipas said in a statement.

The US consulate advised its employees to stay indoors and urged US citizens to do the same or avoid the area. The consulate will be temporarily closed to the public, the Mexican government said later in a statement.

A senior Tamaulipas official told Reuters there was at least one “collateral” fatality due to the violence.

The gunfight followed the arrest of Juan Gerardo Trevino, or “El Huevo,” on Sunday, Mexico’s government said in a statement.

Trevino is facing a US extradition order for drug trafficking and money laundering, as well as state-level charges for murder, terrorism, extortion and criminal association, it added.

He is also a US citizen, a Mexican government official told Reuters. Trevino is on a list of the US Border Patrol’s most wanted criminals, according to media reports.

The Mexican statement named Trevino as the leader of the Cartel of the Northeast, a branch of the Zetas gang, as well as boss of hitman group “Tropas del Infierno” (Troops from Hell).

The arrest represents a “forceful blow” to the cartel’s power in the region, Mexico’s government said.

The government said in its later statement it was committed to security cooperation with the United States and that crime organizations involved in the incident will face the weight of the law of both countries. – Rappler.com