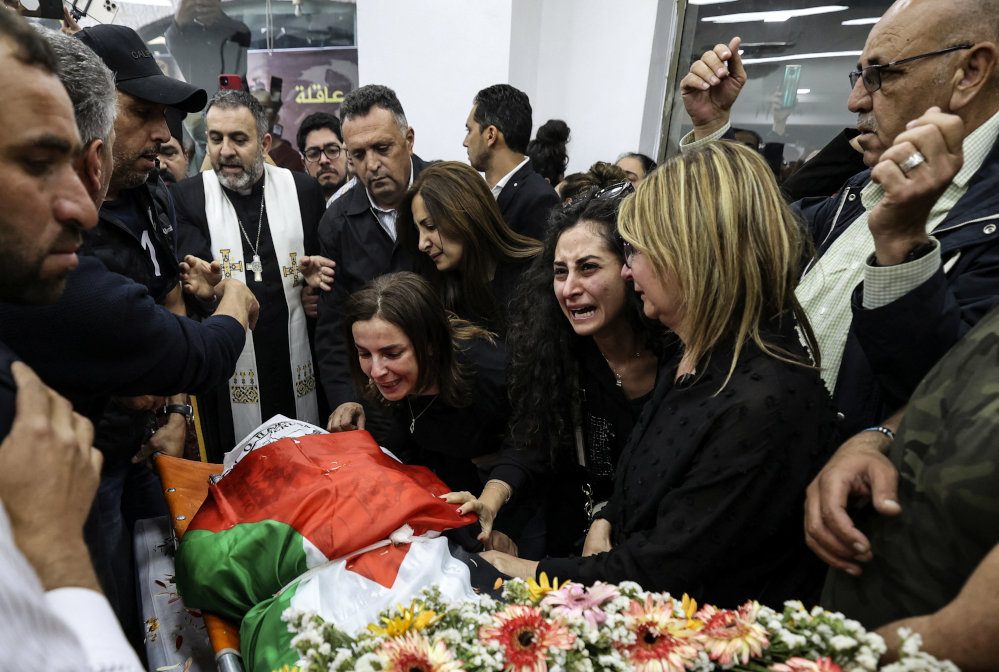 People react as the body of Al Jazeera reporter Shireen Abu Akleh, who was killed in an Israeli raid in Jenin, is brought to the offices of the news channel in Ramallah, in the Israeli-occupied West Bank, May 11, 2022.

Facebook Twitter Copy URL
Copied
The death of Shireen Abu Akleh, a distinguished reporter who has been covering Palestinian affairs and the Middle East for over two decades, is likely to add fuel to a surging conflict 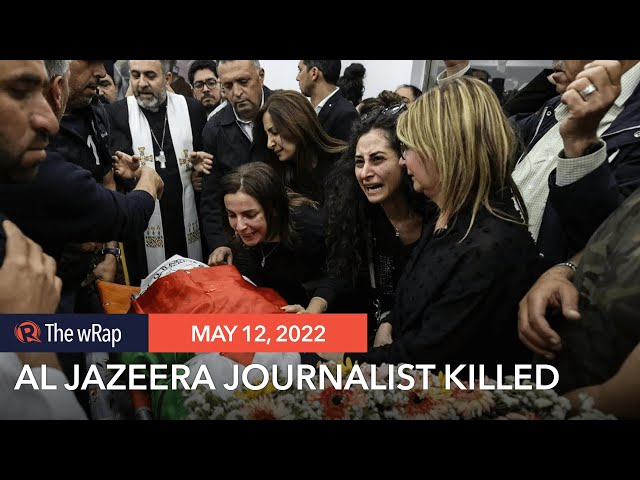 A prominent Palestinian-American Al Jazeera reporter was shot dead during an Israeli raid in the occupied West Bank on Wednesday, May 11, and Israel said it was launching an investigation to try to determine who killed her.

Veteran journalist Shireen Abu Akleh, 51, was wearing a press vest that clearly marked her as “Press” while reporting in the city of Jenin, the Qatar-based outlet said.

She was covering the latest arrest operation launched by the Israeli military amid deadly Arab attacks in Israel.

The death of a distinguished reporter who has been covering Palestinian affairs and the Middle East for over two decades at the popular news channel watched by millions in the Arab world seemed likely to add fuel to a surging conflict.

In an Al Jazeera video captured in the moments around Abu Akleh’s killing, gunfire can be heard in the first few seconds before a man yells “Shireen! Shireen! Ambulance!”

The camera then moves around the corner to show Abu Akleh slumped face-forward on the ground. Other journalists are seen rushing to take cover.

Another Palestinian journalist at the scene, Ali Samoodi, was also wounded.

A Palestinian medical examiner, however, did not echo the accusation, declining to comment on who might have fired the round, after an autopsy was conducted in the West Bank.

“Our initial findings from the investigation so far cannot indicate what gunfire was directed at Shireen, and I cannot exclude any option under the operational chaos on the ground,” Gantz told reporters.

The White House strongly condemned the killing and called for an investigation into Abu Akleh’s death.

On Twitter, US State Department spokesperson Ned Price said her death was an affront to media freedom everywhere.

“The Israelis have the wherewithal and the capabilities to conduct a thorough, comprehensive investigation,” Price told a news briefing.

United Nations Secretary-General Antonio Guterres was “appalled” by the killing and called on “the relevant authorities to carry out an independent and transparent investigation” to ensure that those responsible are held accountable, deputy UN spokesman Farhan Haq said in a statement.

The journalist Samoodi said Israeli forces “suddenly opened fire” towards Abu Akleh and himself during the Jenin operation. He disputed an Israeli military account that gunmen were nearby when the two were shot.

Since March, Palestinians and members of Israel’s Arab minority have killed 18 people, including three police officers and a security guard, in attacks in Israel and the West Bank that have mostly targeted civilians.

Some of the assailants have come from Jenin. The city has been a main target of Israeli arrest raids in the West Bank that have often sparked clashes and brought the number of Palestinians killed by Israeli forces or armed civilians since the beginning of the year to at least 42.

The casualties include armed members of militant groups, lone assailants and bystanders.

Visits by Jewish pilgrims over the past weeks to Al-Aqsa mosque compound in Jerusalem, Islam’s third holiest site and the most sacred place in Judaism, have stoked Palestinian anger.

Treated for his wounds in a hospital in Jenin, Samoodi told reporters: “They (Israeli soldiers) didn’t ask us to leave and they didn’t ask us to stop (filming). They fired at us. One bullet hit me and another hit Shireen. They killed her in cold blood.”

An Israeli military spokesman, briefing foreign journalists and describing Abu Akleh’s death as tragic, said Israeli troops would never deliberately target a non-combatant. He said there had been three direct exchanges of fire with Palestinian gunmen during the raid.

The US ambassador to the UN, Linda Thomas-Greenfield, recalled being interviewed by the “well respected” Abu Akleh late last year and called her death “really horrifying.”

In a Reuters video, Abu Akleh’s colleagues were seen standing around her body, which was wrapped in the Palestinian flag with a press jacket on top, as a priest said a prayer.

The US commander of American forces in the Middle East, Army General Michael “Erik” Kurilla, said his thoughts were with Abu Akleh, her family and her colleagues at Al Jazeera.

“Around the world, reporters such as Shireen demonstrate extraordinary courage every day,” Kurilla said during a trip to the region. – Rappler.com