Iraqis dig up coronavirus dead to rebury in family graves 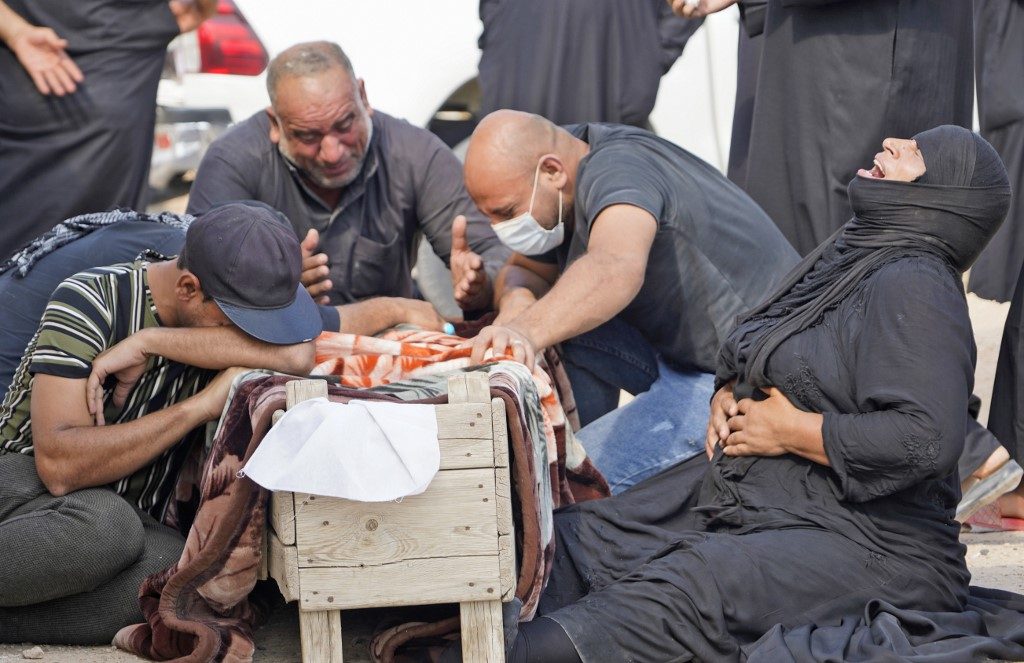 An Iraqi family mourns around the coffin of a relative, who died of the novel coronavirus, during a reburial ceremony at the vast Wadi al-Salam cemetery in the Shiite holy city of Najaf on September 11, 2020. - For months, families of those who died after contracting Covid-19 were barred from taking the body back to bury in family tombs, for fear their bodies could still spread the virus. Instead, the authorities established a "coronavirus cemetery" in a plot of desert, where volunteers in protective gear carefully buried victims spaced five metres (16 feet) apart. But on September 7, Iraqi authorities announced they would permit those who died after contracting Covid-19 to be reburied in the cemetery of their family's choice. (Photo by - / AFP)

“Now he can finally be with our people, our family, in the old cemetery,” 49-year-old Bahadli said, as relatives sobbed over the body, wrapped in a shroud.

After restrictions were eased for the burying of those who died of the novel coronavirus, Iraqis are exhuming the victims to rebury them in their rightful place in family cemeteries.

For months, families of those who died after contracting COVID-19 were barred from taking the body back to bury in family tombs, for fear the corpses could still spread the virus.

Instead, the authorities established a “coronavirus cemetery” in a plot of desert outside the shrine city of Najaf, where volunteers in protective gear carefully buried victims spaced five meters apart.

Only one relative was permitted to attend the speedy burials, which often happened in the middle of the night.

Victims from all religious sects – both Shiite and Sunni Muslims, as well as Christians – were buried there.

But on September 7, Iraqi authorities announced they would permit those who died after contracting COVID-19 to be relocated to the cemetery of their family’s choice.

Many of those buried under the emergency rules came from other parts of the country.

“The first time, he was buried so far away,” Bahadli said of his 80-year-old father’s funeral rites.

“I’m not sure it was done in the proper religious way.”

Iraq has been one of the hardest-hit countries in the Middle East by COVID-19, with more than 280,000 infections and nearly 8,000 deaths.

On September 4, the World Health Organization (WHO) said “the likelihood of transmission when handling human remains is low.”

Days later, after pressure from families, Iraqi authorities announced they would permit bodies to be transferred only by “specialised health teams.”

But the first reburials proved chaotic.

At the “coronavirus cemetery” in the desert outside Najaf, hundreds of families began arriving late Thursday, September 10, to dig up their family member and carry the body home.

They brought their own shovels, baskets to scoop away the sand, and new wooden coffins to carry the dead.

The sounds of fierce sobbing and mourning prayers mixed with the clinks of pickaxes echoed across the sand.

There were no medical professionals or cemetery guides on site to help families locate or properly excavate the bodies, an AFP correspondent said.

In some cases, families dug into a grave site marked with a relative’s name, only to find an empty coffin, or to uncover the body of a young man when they were expecting to find the corpse of their elderly mother.

Other bodies were not wrapped in burial shrouds, required by Islam as a sign of respect.

The findings sparked outraged criticism of the state-sponsored armed group that had taken charge of the burials in recent months, with some angry relatives setting fire to the faction’s base nearby.

“The grave-diggers don’t have expertise or the right materials,” said Abdallah Kareem, whose brother Ahmed died of complications from COVID-19.

“They don’t even know how to locate the graves,” he told AFP while tending to the grave.

Kareem, who comes from some 230 kilometers to the south in Iraq’s Muthanna province, opted not to rebury his brother in case it violated religious edicts.

In Islam, the deceased must be buried as soon as possible, usually within 24 hours.

Cremation is strictly prohibited and reburials are virtually unheard of — although not necessarily outlawed if the body is kept intact, a Najaf cleric told AFP.

Despite the complications, families were nevertheless relieved to have the closure that a traditional burial brought.

“Since my father was buried here, I keep replaying his words in my head before he died: ‘My son, try to bury me in the family cemetery, don’t let me be too far from my relatives,'” Hussein, another mourner who gave only his first name, told AFP.

The 53-year old dug up his father’s body by hand to transfer him to the vast Wadi al-Salam cemetery, where millions of Shiite Muslims are buried.

“The dream that had been haunting me for these last few months has been realized,” Hussein said. – Rappler.com