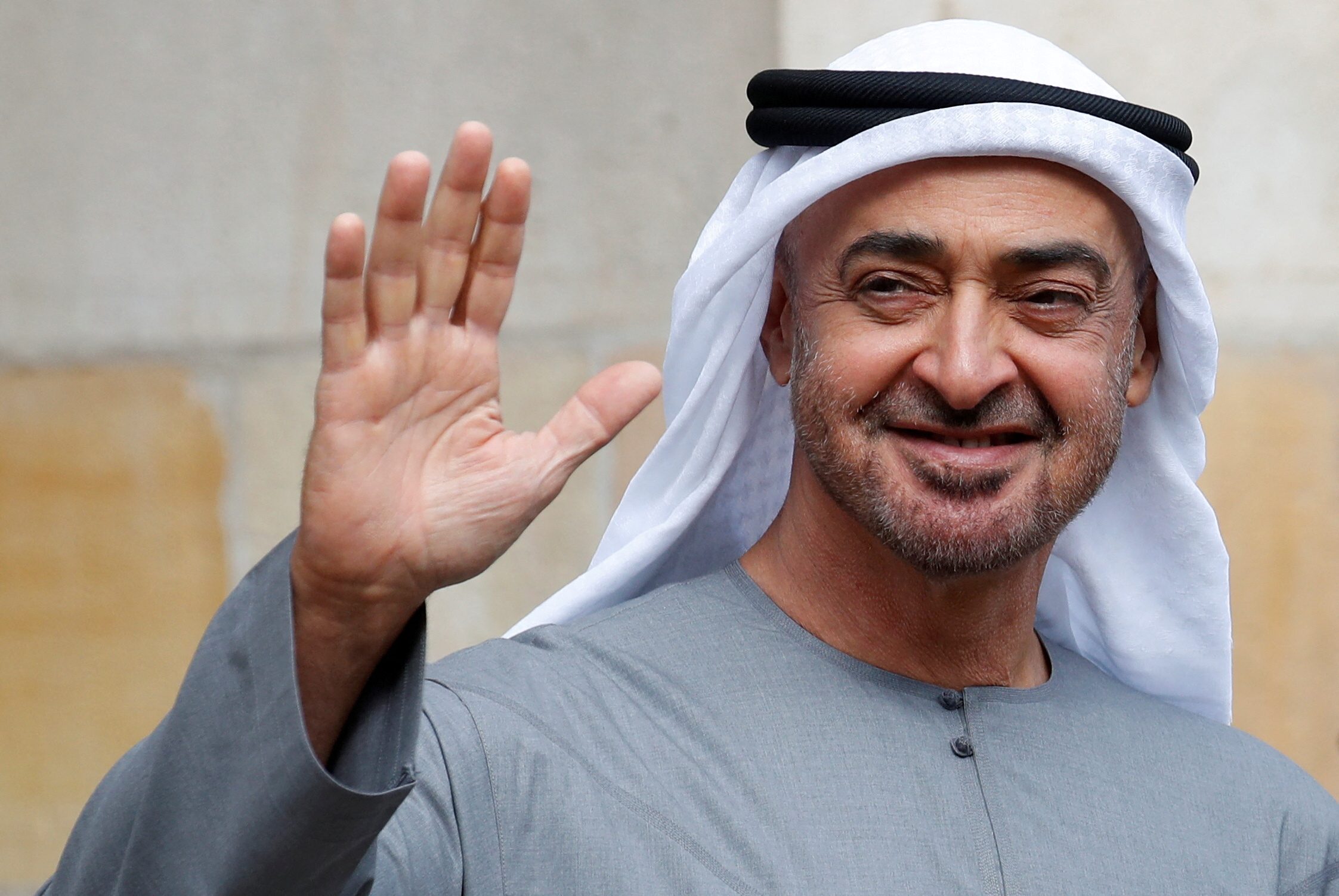 Facebook Twitter Copy URL
Copied
(1st UPDATE) Although he says he was attracted to their Islamist ideology in his youth, MbZ has framed the Muslim Brotherhood as one of the gravest threats to stability in the Middle East

DUBAI, UAE – United Arab Emirates strongman Sheikh Mohammed bin Zayed al-Nahyan, who was formally elected president on Saturday, May 14, led a realignment of the Middle East that created a new anti-Iran axis with Israel and fought a rising tide of political Islam in the region.

Working behind the scenes for years as de facto leader, Sheikh Mohammed, 61, transformed the UAE military into a high-tech force, which coupled with its oil wealth and business hub status, extended Emirati influence internationally.

Mohammed began wielding power in a period when his half-brother President Sheikh Khalifa bin Zayed, who died on Friday, suffered bouts of illness, including a stroke in 2014.

MbZ, as he is known, was driven by a “certain fatalistic line of thinking” that Gulf Arab rulers could no longer rely on their main supporter the United States, according to former U.S. envoy to the UAE Barbara Leaf, especially after Washington abandoned Egypt’s Hosni Mubarak during the 2011 Arab Spring.

From his power base in the capital Abu Dhabi, Sheikh Mohammed issued a “calm and cold” warning to then-President Barack Obama not to back uprisings that could spread and endanger Gulf dynastic rule, according to Obama’s memoir, which described MbZ as the “savviest” Gulf leader.

A US State Department official serving in the Biden administration, which has had fraught ties with the UAE in recent months, described him as a strategist who brings historical perspective to discussions.

“He will talk not only about the present, but go back years, decades, in some cases, speaking to trends over time,” the official said.

MbZ backed the 2013 military ousting of Egypt’s elected Muslim Brotherhood president Mohammed Mursi, and championed Saudi Arabia’s Prince Mohammed bin Salman as he rose to power in a 2017 palace coup, touting him as a man Washington could deal with and the only one able to open up the kingdom.

Encouraged by warm ties with the then U.S. President Donald Trump, the two Gulf hawks lobbied for Washington’s maximum pressure campaign on Iran, boycotted neighbouring Qatar for supporting the Muslim Brotherhood, and launched a costly war to try to break the grip of Yemen’s Iran-aligned Houthis.

The UAE also waded into conflicts from Somalia to Libya and Sudan before upending decades of Arab consensus by forging ties with Israel in 2020, along with Bahrain, in U.S.-brokered deals known as the Abraham Accords that drew Palestinian ire.

The accords were driven by shared concerns over Iran but also perceived benefits to the UAE economy and fatigue with a Palestinian leadership “that doesn’t listen”, said one diplomat.

While diplomats and analysts see the alliance with Riyadh and Washington as a pillar of UAE strategy, MbZ has not hesitated to move independently when interests or economic reasons dictate.

The Ukraine crisis exposed strains with Washington when the UAE abstained from a U.N. Security Council vote condemning Russia’s invasion. As an OPEC producer, along with oil titan Riyadh, the UAE also rebuffed Western calls to pump more.

Abu Dhabi has ignored other U.S. concerns by arming and backing Libya’s Khalifa Hafter against the internationally recognised government and engaging with Syria’s Bashar al-Assad.

With Riyadh, the biggest divergence came when the UAE largely withdrew from Yemen as the unpopular war, in which more than 100 Emiratis died, got mired in military stalemate.

When Sudan’s President Omar Hassan al-Bashir reneged on a promise to abandon Islamist allies, Abu Dhabi orchestrated the 2019 coup against him.

Although he says he was attracted to their Islamist ideology in his youth, MbZ has framed the Muslim Brotherhood as one of the gravest threats to stability in the Middle East.

Like Saudi Arabia, the UAE accuses the Brotherhood of betrayal after it sheltered members persecuted in Egypt in the 1960s, only to see them work for change in their host countries.

Educated in the UAE and the military officer’s college at Sandhurst in Britain, Sheikh Mohammed’s mistrust of Islamists heightened after 2001, when two of his countrymen were among the 19 hijackers in the Sept. 11 attacks on the United States.

“He looked around and saw that many of the younger generation in the region were very attracted to Osama bin Laden’s anti-Western mantra,” another diplomat said. “As he once said to me: ‘If they can do it to you, they can do it to us.'”

Despite years of enmity, MbZ chose to engage with Iran and Turkey as COVID-19 and rising economic competition with Saudi Arabia turned focus to development, pushing the UAE towards further liberalization while keeping a lid on political dissent.

Seen as a modernizer at home and a charismatic people’s man by many diplomats, MbZ doggedly promoted the previously low-profile Abu Dhabi, which holds the UAE’s oil wealth, by spurring development in energy, infrastructure and technology.

As deputy supreme commander of armed forces he was credited with turning the UAE military into one of the most effective in the Arab world, according to experts who say he instituted military service to instil nationalism rather than entitlement among an affluent population.

“He doesn’t beat around the bush … he wants to know what isn’t working well, not just what’s working,” said a source with access to Sheikh Mohammed.

MbZ becomes president at a time when the UAE’s long-standing ties with the United States have been strained over perceived US disengagement from its Gulf allies’ security concerns, and as Western countries seek support from the region to help isolate Russia over the Ukraine conflict.

“We congratulate him and pledge allegiance to him as do our people…and the entire country will follow his leadership to glory,” Dubai ruler Sheikh Mohammed bin Rashid al-Maktoum, who is also UAE vice-president and premier, said in a Twitter post.

MbZ had already been wielding power for years during which he led a realignment of the Middle East that created a new anti-Iran axis with Israel and invested in the UAE military, which coupled with its oil wealth, extended Emirati influence.

The UAE, a trade and tourism hub, has also deepened ties with Russia and China at a time when Washington’s political capital with Abu Dhabi and Riyadh has been eroded by differences over the Yemen war, Iran and US conditions on lucrative arms sales.

“Mohammed bin Zayed has set not only the future course for the UAE but for much of the Gulf in his approach to state building and power projection,” said Kristin Diwan, senior resident scholar at Arab Gulf States Institute in Washington.

“The future direction under him is set and is mirrored in other Gulf leaders adopting state-led and globally-oriented economic diversification and a more assertive foreign policy that looks beyond the Gulf and traditional partners.”

The Biden administration has moved to mend ties with oil heavyweights Saudi Arabia and the UAE. Both have refused to take sides in the Russia-Ukraine conflict and rebuffed Western calls to pump more oil to help tame crude prices.

It was not clear if President Joe Biden would be among world leaders heading to Abu Dhabi to offer condolences following Sheikh Khalifa’s death. French President Emmanuel Macron is due to arrive on Sunday.

MbZ has shifted away from a hawkish foreign policy and military adventurism, that saw the UAE wade into conflicts from Yemen to Libya, to focus on economic priorities. This has seen the UAE engage with foes Iran and Turkey after years of animosity, as well as Syria’s president.

“MbZ will need to take further steps to cement the UAE’s position as the region’s leading financial, logistics, and trading hub,” James Swanston of Capital Economics said in a note, referring to a push by Gulf states to diversify economies amid a global energy transition away from hydrocarbons. – Rappler.com