Pope Emeritus Benedict XVI, the 265th leader of the Roman Catholic Church, left a mixed legacy after his death at the age of 95 on December 31, 2022.

For critics, Benedict was a conservative who despised liberals. For supporters, the late former pontiff was one of the Catholic Church’s greatest theologians, and also a humble servant without qualms about relinquishing power. The German-born Joseph Ratzinger was the first pope to resign in 600 years.

The Vatican is set to hold his wake at the Saint Peter’s Basilica from January 2 to 4, followed by his funeral and burial on January 5. 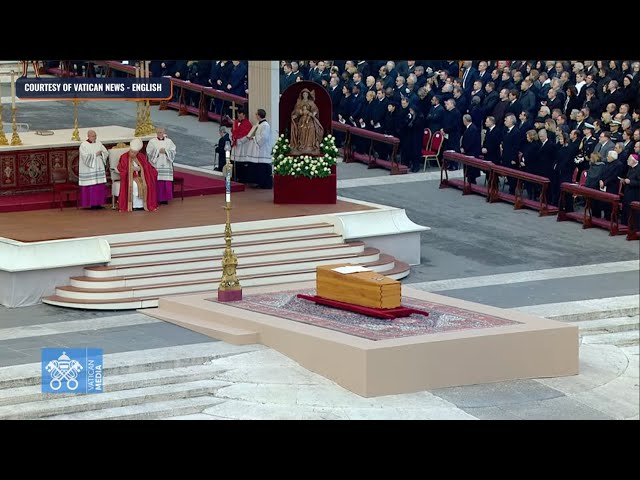 Bookmark this page for live updates, context, and analyses on the death, wake, funeral, and burial of Pope Emeritus Benedict XVI.

US President Joe Biden signed a condolence book for former Pope Benedict in Washington on Thursday, January 5, paying his respects to the former pontiff on the day his funeral mass was held in Vatican City.

Biden, a devout Catholic, lauded Benedict after his death for being “a renowned theologian, with a lifetime of devotion to the Church, guided by his principles and faith.”

In his condolence note, Biden said Benedict was a brilliant scholar and a “Holy Man.”

“I will always cherish our time together at the Vatican when he was Pope discussing Catholic theology,” Biden wrote. “He was a great theologian and I learned much in a few hours.”

The president, a Democrat, has been criticized by some in the Catholic Church for his support of abortion rights. Benedict’s death was a loss for conservatives, who favored the more traditional Catholic Church that the former pope championed.

Pope Francis presided at the funeral of former Pope Benedict on Thursday, January 5, delivering a homily comparing his predecessor to Jesus before tens of thousands of mourners in St. Peter’s square.

To the sound of tolling bells, 12 pallbearers had carried the wooden coffin holding Benedict’s remains out of St. Peter’s Basilica and placed it on the ground before the largest church in Christendom.

Applause broke out across the vast, cobbled esplanade, which was shrouded in mist, in a sign of respect for Benedict, a hero to Roman Catholic conservatives who shocked the world by resigning nearly a decade ago. (Read the full story here.) To the sound of tolling bells, 12 pallbearers carried the wooden coffin of Pope Benedict out of Saint Peter’s Basilica on Thursday, January 5, and placed it before thousands of faithful gathered in the square for his funeral.

Pope Francis arrived in the square in a wheelchair to preside over the service. Troubled by a bad knee, the pontiff sat in a chair looking down on the coffin, slightly hunched and glum-faced as choirs sung in Latin.

Clergy from around the world, a handful of heads of state and thousands of faithful attended the outdoor ceremony as the sun slowly broke through the fog.

To the sound of tolling bells, 12 pallbearers carried the wooden coffin of Pope Benedict out of St. Peter’s Basilica on Thursday, January 5, and placed it before thousands of faithful gathered in the square ahead of his funeral.

Crowds of people began arriving in the Vatican area as early as 4 am (0300 GMT), five and half hours before the funeral which will be presided over by his successor, Pope Francis.

The two hour service was preceded by recitations of prayers.

More than 1,000 Italian security personnel were called up to help safeguard the event, and air space around the tiny Holy See has been closed off for the day. Italy ordered that flags around the country be flown at half staff.

Among those attending the funeral were Germans in traditional Bavarian outfits carrying flags and standards of the area of Germany where Benedict was born.

Benedict, a world renowned theologian, died at 95 on Saturday in a monastery within the Vatican gardens where he moved after becoming the first pontiff in 600 years to stand down, opening the way for the election of Pope Francis, who has proved a more reformist, hands-on leader.

“Even though at our age we were just children when he was pope, he left his mark,” Xavier Mora, 24, a Spaniard who is studying for the priesthood in Rome, told Reuters as he approached the square with two other seminarians.

“We have been studying his theology for three years and even though we did not know him personally we have great affection and esteem for him,” he said.

The lying-in-state ended on Wednesday evening and the body was put into a plain cypress wood coffin ready for the funeral.

A one-page account of Benedict’s papacy, along with other items, including Vatican coins minted during his reign, were also tucked into the coffin.

The three-page account of his life and papacy, written in Latin, says he “fought with firmness” against sexual abuse by clergy in the Church.

The coffin of Benedict XVI is carried to St. Peter’s Square

Cardinals arrive ahead of the funeral