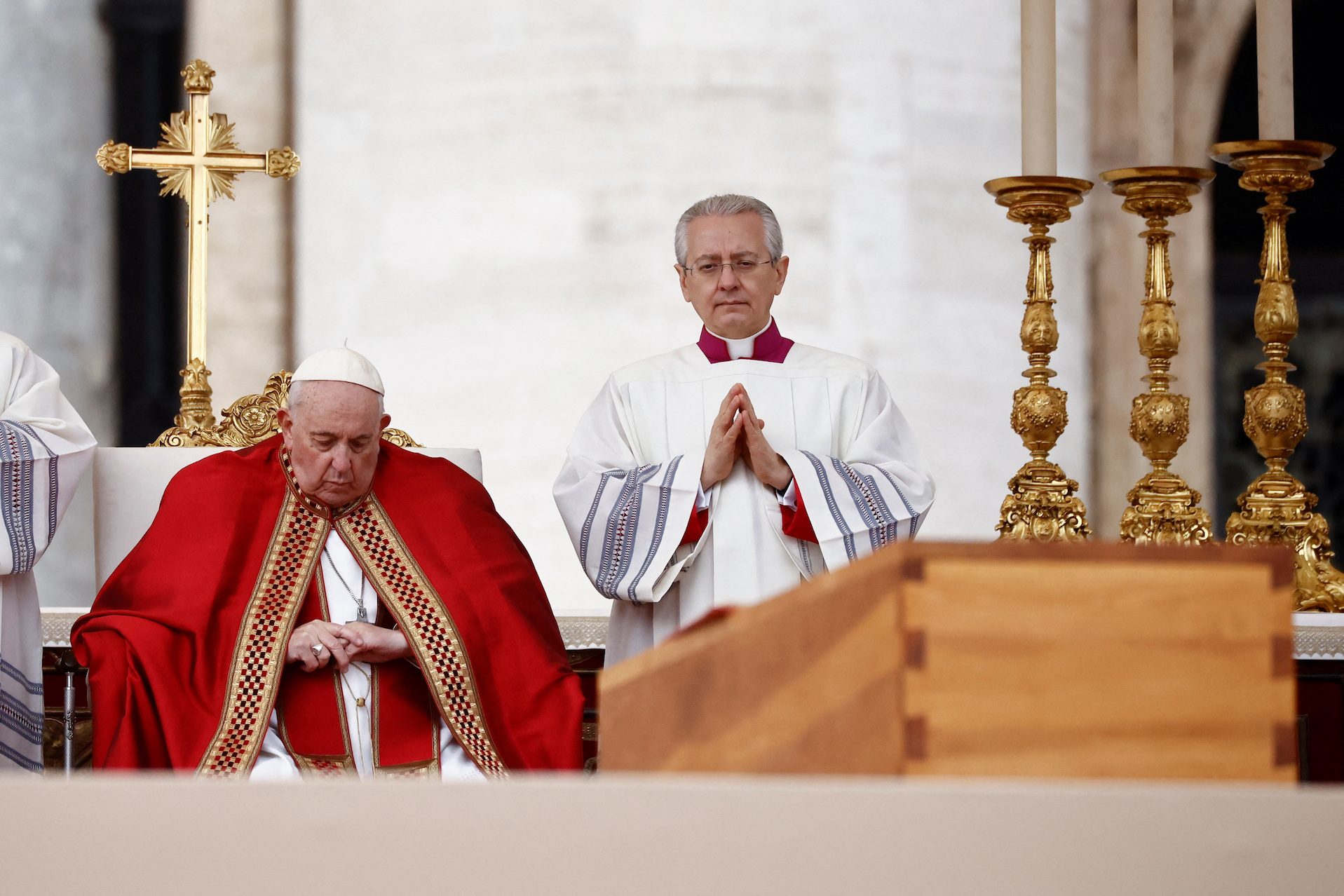 Pope Francis presides over the funeral ceremonies of former Pope Benedict in St. Peter's Square at the Vatican, January 5, 2023.

Facebook Twitter Copy URL
Copied
Pope Francis mentions Benedict by name only once, in the last line of his homily, saying: 'Benedict, faithful friend of the Bridegroom, (Jesus) may your joy be complete as you hear his voice, now and forever!'

VATICAN CITY – Pope Francis presided at the funeral of former Pope Benedict on Thursday, January 5, delivering a homily comparing his predecessor to Jesus before tens of thousands of mourners in St. Peter’s square.

To the sound of tolling bells, 12 pallbearers had carried the wooden coffin holding Benedict’s remains out of St. Peter’s Basilica and placed it on the ground before the largest church in Christendom.

Francis arrived in the square in a wheelchair. Troubled by a bad knee, the pontiff sat in a chair looking down on the coffin, slightly hunched and glum-faced as choirs sung in Latin.

In his homily read from the same spot, Francis used more than a dozen biblical references and Church writings in which he appeared to compare Benedict to Jesus, including his last word before he died on the cross: “Father, into your hands I commend my spirit.”

Francis also referred to Benedict indirectly in paraphrases of other Biblical references to Jesus, including “love means being ready to suffer” and that the congregation was “commending our brother into the hands of the father”.

Also referring to Benedict during the Mass concelebrated by 125 cardinals, 200 bishops and about 3,700 priests, Francis spoke of “wisdom, tenderness and devotion that he bestowed upon us over the years”.

He mentioned Benedict by name only once, in the last line, saying: “Benedict, faithful friend of the Bridegroom, (Jesus) may your joy be complete as you hear his voice, now and forever!”

Clergy from around the world, a handful of heads of state and thousands of faithful attended the ceremony as the sun slowly broke through the fog.

More than 1,000 Italian security personnel were called up to help safeguard the event, and air space around the tiny Holy See has been closed off for the day. Italy ordered that flags around the country be flown at half staff.

People from all over the world, many from Benedict’s native Germany, began arriving the dark of the night to say farewell to Benedict.

“Even though at our age we were just children when he was pope, he left his mark,” Xavier Mora, 24, a Spaniard who is studying for the priesthood in Rome, told Reuters as he approached the square with two other seminarians.

“We have been studying his theology for three years and even though we did not know him personally we have great affection and esteem for him,” he said.

About 200,000 people filed past Benedict’s body while it was lying-in-state until Wednesday evening.

An account of Benedict’s papacy, along with other items, including Vatican coins minted during his reign, was also tucked into the coffin.

The account of his life and papacy, written in Latin, says he “fought with firmness” against sexual abuse by clergy in the Church.

After the funeral ceremony, the coffin will be taken back inside the basilica and encased in zinc before being sealed in a second wooden casket.

Because Benedict was no longer a head of state when he died, only two countries, Italy and his native Germany, sent official delegations on Thursday.

Francis himself has made clear that he would not hesitate to step down some day if his mental or physical health prevented him from carrying out his duties, but Vatican officials always doubted he could do this while Benedict was still alive.

Even though Benedict largely avoided public appearances in subsequent years, he remained a standard-bearer for Catholic conservatives, who felt alienated by reforms ushered in by Francis, including cracking down on the old Latin Mass.

At his request, Benedict will be buried later on Thursday in the underground Vatican grottoes in the niche where first Pope John XXIII and then John Paul II were interred before their remains were transferred to more prominent places in the basilica above. – Rappler.com