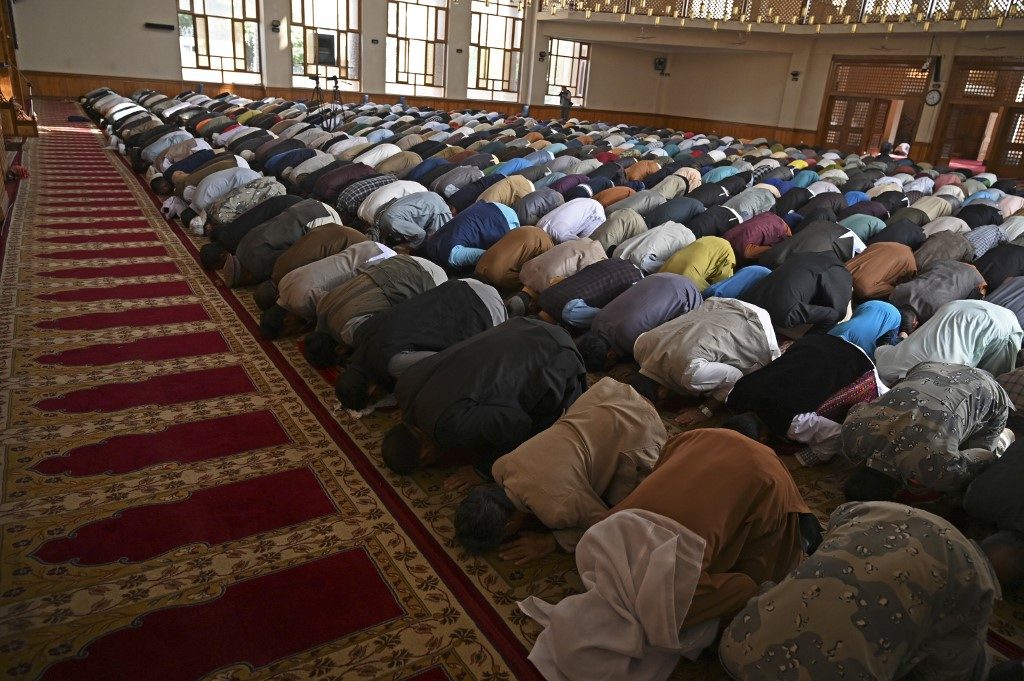 Muslim devotees offer Eid al-Adha prayers at Abdul Rahman mosque in Kabul on July 31, 2020. - Eid al-Adha, feast of the sacrifice, marks the end of the Hajj pilgrimage to Mecca and commemorates Prophet Abraham's readiness to sacrifice his son to show obedience to Allah. (Photo by WAKIL KOHSAR / AFP)

Afghans flocked to mosques Friday, July 31, to mark the Muslim festival of Eid al-Adha as a three-day ceasefire between Taliban and government forces began, with many hoping it will lead to peace talks and the end of nearly two decades of conflict.

A car bomb that killed at least 17 people in the country’s east just hours before the ceasefire started underlined the scale of the challenge ahead, although the Taliban denied any involvement.

The halt in fighting is slated to last for the duration of Eid al-Adha and is only the third official truce in nearly 19 years of war.

“We want a permanent ceasefire from the Taliban as they are the ones who paved the way for other terrorist groups to operate in Afghanistan,” Mohammad Tahir, a taxi driver, told Agence France-Presse (AFP) after offering Eid prayers at a Kabul mosque.

As the ceasefire commenced, hundreds of worshippers went to mosques across the capital where they were patted down by armed guards before going inside.

Crowds of worshippers also prayed at mosques in the eastern city of Jalalabad which has seen many deadly attacks over the years.

“Previously, we were not attending Eid prayers in large numbers for fear of suicide attacks,” Jalalabad resident Wala Jan told AFP after praying at a local mosque.

There were no immediate reports of any fighting in the country.

President Ashraf Ghani and the Taliban have both signaled that peace talks could begin straight after Eid, and there are widespread calls for the warring parties to extend the ceasefire.

Under a deal signed by the Taliban and the US in February, “intra-Afghan” talks were slated to start in March, but were delayed amid political infighting in Kabul and as a contentious prisoner exchange dragged on.

That swap will see Kabul free 5,000 Taliban fighters, while the insurgents claimed late Thursday, July 30, they had fulfilled their pledge to release 1,000 government forces.

In an Eid speech, Ghani said another 500 prisoners will be released during the festival in a bid to “accelerate the peace talks.”

However, the 500 inmates are not on the original list of 5,000 demanded by the Taliban.

Kabul authorities have already freed 4,600 of those prisoners but are hesitating over the final 400, deeming them too dangerous.

Ghani said he did “not have the right” to take a decision on the release of the 400 who are accused of “serious crimes” – including sexual violence, robbery and stoning women to death – adding that a gathering of Afghan elders would decide their fate.

The Taliban, who have insisted on the release of those 400 militants, did not immediately comment.

US special envoy Zalmay Khalilzad, who led negotiations with the Taliban, is currently visiting regional players including Ghani in Kabul to push for a ceasefire extension.

Since signing the February deal, the Taliban have largely refrained from attacking cities and have not hit US troops.

But they have conducted near-daily attacks on Afghan forces and civilians.

Highlighting the recent toll, Ghani this week said more than 3,500 Afghan troops and nearly 800 civilians had been killed since the deal was signed.

The UN Assistance Mission in Afghanistan has blamed the Taliban for the bulk of civilian casualties during the first half of 2020.

“We want extension of ceasefire so that bloodshed ends… We have suffered from the conflict for the last 40 years,” Sharif Ahmad, a shopkeeper, told AFP after offering Eid prayers.

Many Afghans are leery about what comes next.

After two previous truces – in 2018 and May this year – the Taliban immediately returned to the battlefield.

“If they want peace then they should surrender their arms and hold immediate talks with the Afghan government,” Kabul resident Farhad Habibi wrote in a Facebook post.

Thursday’s car bomb exploded as crowds shopped ahead of Eid in the city of Puli Alam in Logar province.

Taliban spokesman Zabihullah Mujahid said the blast had “nothing to do” with the insurgents. – Rappler.com