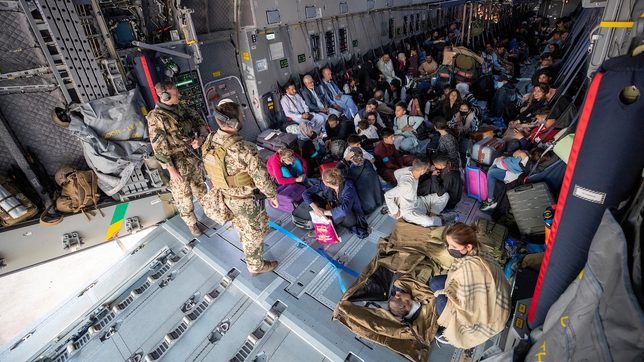 PACKED. A handout photo obtained from Twitter via @Bw_Einsatz on August 17, 2021 shows evacuees from Afghanistan as they arrive in an Airbus A400 transport aircraft of the German Air Force Luftwaffe in Tashkent, Uzbekistan.

Facebook Twitter Copy URL
Copied
In his speech on Monday, Biden appeared to blame the applicants: 'Some of the Afghans did not want to leave earlier, still hopeful for their country.'

President Joe Biden’s pledge to evacuate thousands more at-risk Afghans who worked for the US government will run into the cold reality of a fast-closing window of time, insecurity all over Afghanistan and major logistical hurdles.

As one US official told Reuters “too many things have to go 100% correctly” to execute the plan to move out those going through the Special Immigrant Visa (SIV) process. The Pentagon is aiming to evacuate up to 22,000 SIV applicants, their families, and other at-risk people.

But officials and refugee resettlement groups said that number, while admirable, will be much more difficult to reach now that the Taliban have seized the capital Kabul and most of the country.

Groups that work with refugees vigorously disputed Biden’s assertion in a speech on Monday, August 16, that many applicants had not wanted to leave Afghanistan earlier.

Biden announced his intent to start evacuating at-risk Afghans in July, despite calls by lawmakers and refugee groups to do so months earlier. Since July, only 2,000 Afghans have been flown to the United States.

“It’s a nice goal to have, but realistically it’s going to be a challenge,” the US official, speaking on the condition of anonymity, said of the 22,000-person benchmark.

Evacuating that many Afghans would require them to first be able to get to Kabul and then to the airport through a series of Taliban checkpoints, officials said. The US military would need to maintain some semblance of calm at the airport to allow flights to take off and land, and also need the weather to cooperate.

Order has been restored at Kabul airport after five people were killed on Monday as thousands of desperate Afghans thronged the area. The US military temporarily suspended flights to clear the airfield. The evacuation mission is set to end on August 31.

National security adviser Jake Sullivan said on Monday that the White House had received reports of people being beaten outside the airport even though the Taliban had agreed to allow civilians safe passage.

Kim Staffieri, executive director of the Association of Wartime Allies, said the group’s contacts outside of Kabul are “terrified” and reporting that in some places, “Taliban fighters are going door to door and pulling people out who are not being seen again.”

Jenny Yang, senior vice president at World Relief, a US refugee resettlement agency, said that with the Taliban in control, “it’s going to be increasingly difficult for Afghans to leave.”

Ideally, officials say the White House would have allowed the Pentagon to start evacuating people weeks earlier using military aircraft and moving them to bases in the United States.

Instead, until last week the SIV applicants were slowly flown out through civilian aircraft and only one base in Virginia was tapped to house them.

The State Department did not formally request the use of more military bases in the United States to house the Afghan applicants until Sunday, with the Taliban already in Kabul, another official said.

Resettlement groups have said for months that at least 80,000 SIV applicants and their families need to be evacuated.

Two US officials told Reuters that Biden was concerned about the political impact of large number of Afghan refugees flowing into the United States and preferred they be sent to third countries.

Biden, a Democrat, has faced intense political pressure over immigration from opposition Republicans as arrests at the US-Mexico border have soared to 20-year highs in recent months.

Earlier this year, Biden delayed a decision to raise the cap for refugee admissions due to the political optics, US officials told Reuters at the time.

In his speech on Monday, Biden acknowledged concerns about why Afghans had not been evacuated earlier, but said the Afghan government had discouraged him from doing so.

He also appeared to blame the applicants.

“Some of the Afghans did not want to leave earlier, still hopeful for their country,” Biden said.

The comments stunned officials and refugee groups, who have been working for years to streamline the lengthy process to get Afghan SIV applicants out of Afghanistan.

People have been stuck waiting for visas for years, said Betsy Fisher, director of strategy at International Refugee Assistance Project.

“To me that is extremely, extremely appalling to see that language coming out from the White House,” Fisher said.

Some interpreters and translators for the US government had been killed in the last few months waiting to get out, said Krish O’Mara Vignarajah, president of the Lutheran Immigration and Refugee Service.

“To suggest that Afghans were not desperately seeking refuge here in the US is utterly inconsistent with our experience,” Vignarajah said. – Rappler.com