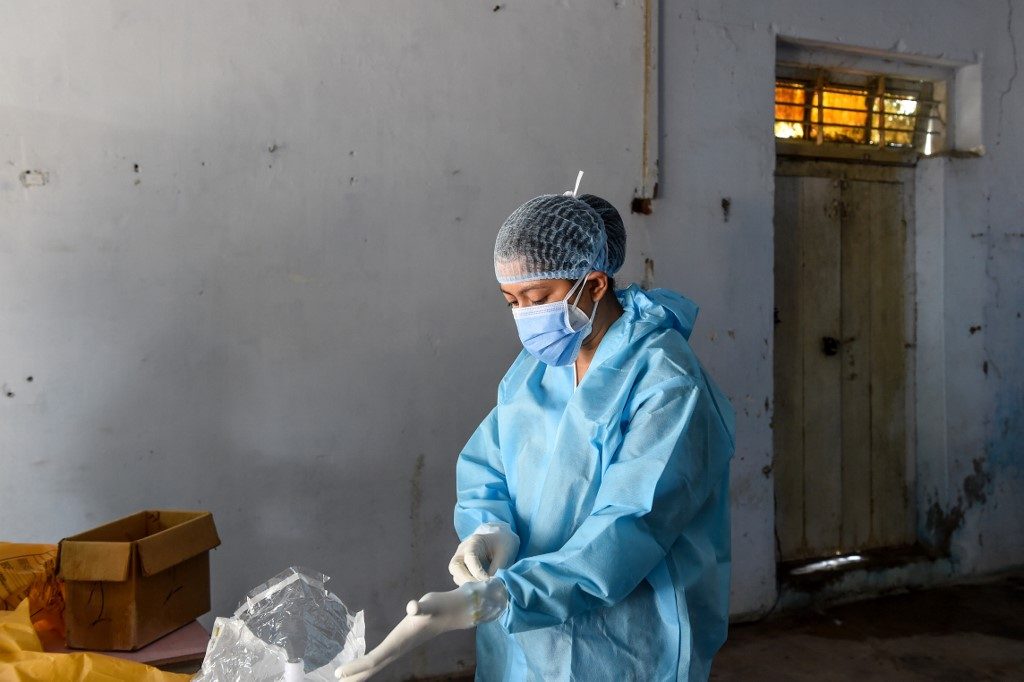 PREPARATIONS. A health worker prepares before testing prisoners for the coronavirus at a medical clinic in the premises of Sabarmati Central Jail in Ahmedabad on October 2, 2020. Photo by Sam Panthaky/AFP

Facebook Twitter Copy URL
Copied
In terms of infections, India has recorded 6.47 million cases and is on course to overtake the US as the country with the most infections in the coming weeks

Deaths from the novel coronavirus in India passed 100,000 on Saturday, October 3, official data showed as the pandemic continued to rage across the world’s second most populous country.

A total of 100,842 people have now died, health ministry figures showed, giving India the third-highest death toll in the world behind the United States and Brazil.

In terms of infections, India has recorded 6.47 million cases and is on course to overtake the US as the country with the most infections in the coming weeks.

India’s population of 1.3 billion is, however, around four times larger than that of the United States, which has seen more than twice as many deaths, raising doubts about India’s official numbers.

“We do not know the reliability of death rates in India,” virologist T. Jacob John told AFP.

“India does not have a public health surveillance system, documenting real-time all disease events and deaths,” he said.

Even though India is carrying out around one million tests per day, as a percentage of the population its testing rate is much lower than many other countries.

The United States, for example, has tested more than 5 times as many people as India proportionately, according to tracking website Worldometer.

That India’s real numbers might be much worse than the official data suggest is borne out by a string of studies measuring antibodies to the virus among the population.

On Tuesday, India’s lead pandemic agency released a survey suggesting that more than 60 million people – 10 times the official figure – could have contracted the virus.

At the same time, Prime Minister Narendra Modi’s government is pressing ahead with opening up Asia’s third-largest economy even as virus cases surge.

A strict lockdown imposed in March not only failed to stop the spread of the virus but also caused misery for millions of people suddenly left jobless.

In the last quarter, the Indian economy – which even before the pandemic was struggling – shrank 24%, one of the steepest drops of any major economy.

International commercial flights remain suspended although limited services, many to allow citizens to return to their home countries, have been operating.

Trains, metros, domestic flights, markets and restaurants have already reopened or resumed service, with some restrictions.

On Wednesday, the government said all schools could re-open along with cinemas and swimming polls, subject to certain conditions.

The state of Bihar will allow its 70 million voters to cast ballots in upcoming elections, one of the biggest to take place worldwide since the pandemic began.

Dildar Singh Rana, 57, said the hospitality industry that he works in has seen “destruction” and has no choice but to open up despite the health risks.

“The virus is on the rampage… But we fear losing out to rivals with deep pockets so we have to venture out and start our business,” he told AFP.

Laid off during the lockdown, Priya Hemnani, 25, from the city of Faizabad said she believes the pandemic is having a major effect on Indians’ mental health.

“Depression, anxiety disorders and stress have become a part of my daily lifestyle,” she told AFP. – Rappler.com