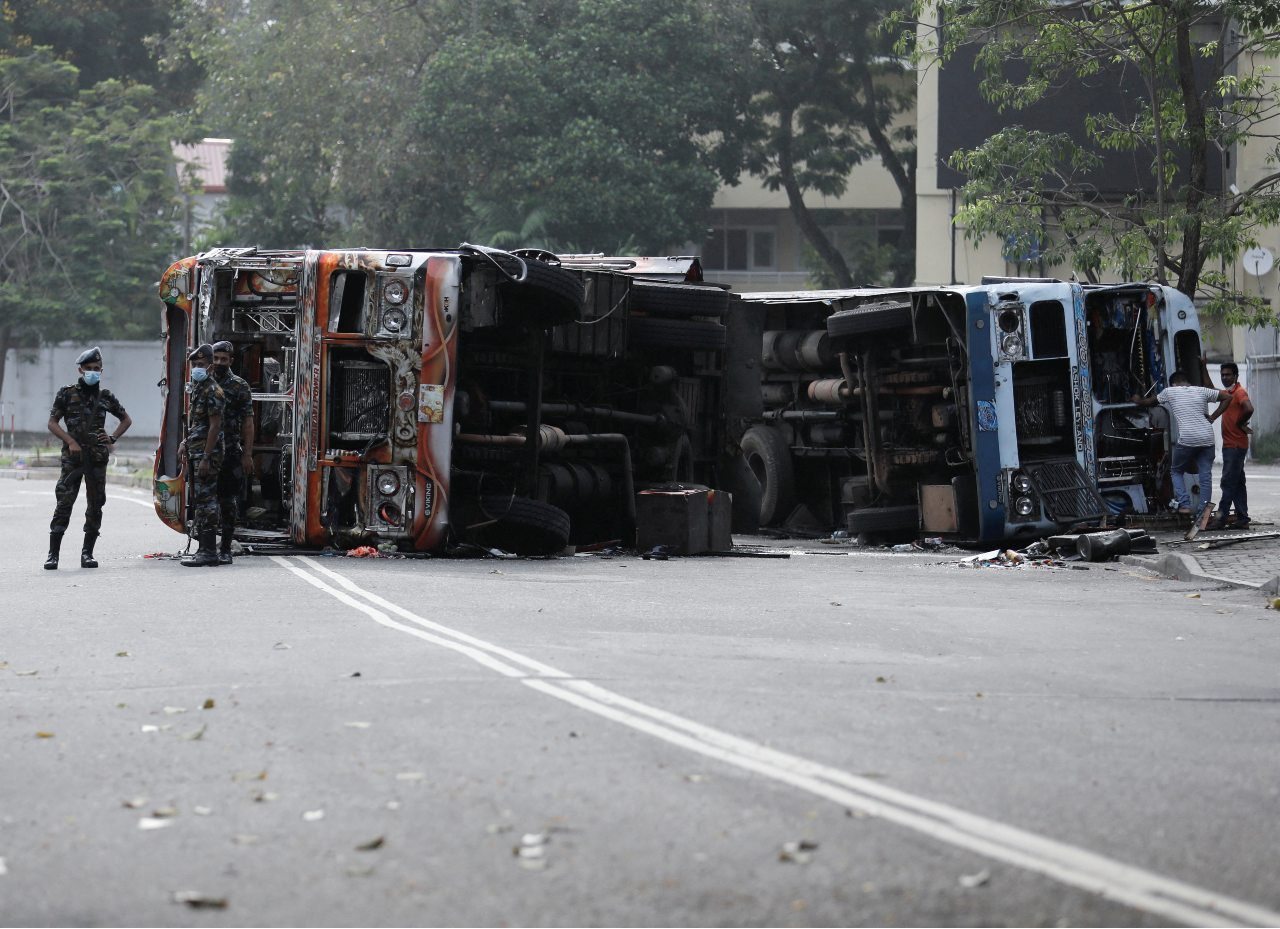 CRISIS. Air force personnel guard at a check point near a damaged bus of Sri Lanka's ruling party supporters after it was set on fire during a clash of pro and anti-government demonstrators near the Prime Minister's official residence, amid the country's economic crisis, in Colombo, Sri Lanka, on May 10, 2022.

Facebook Twitter Copy URL
Copied
'We will stop this struggle when our people get justice,' says Chamalage Shivakumar, one of the hundreds of people who have camped out at a protest site in the main city Colombo

COLOMBO, Sri Lanka – Sri Lanka’s new prime minister will begin forming a unity government on Friday, May 13, but his appointment has failed to appease anti-government protesters demanding the resignation of the president for the country’s disastrous economic crisis.

President Gotabaya Rajapaksa appointed veteran opposition politician Ranil Wickremesinghe as the island nation’s prime minister late on Thursday, May 12, after a week of violent clashes that left 9 people dead and over 300 injured.

The president’s elder brother, Mahinda Rajapaksa, quit as prime minister on Monday, May 9, as the violence spiraled and is in hiding in a military base.

“We will stop this struggle when our people get justice,” said Chamalage Shivakumar, one of the hundreds of people who have camped out at a protest site in the main city Colombo.

“Whoever they appoint as prime minister, we will not stop this struggle until people get relief.”

Wickremesinghe is the only lawmaker from his United National Party in the country’s parliament and will be reliant on rival political parties to form a government. An alliance led by the Rajapaksas holds about 100 of parliament’s 225 seats, while the opposition has 58 seats. The rest are independent.

On Friday, Wickremesinghe met India’s high commissioner, or ambassador to Sri Lanka, his first publicly known contact with a foreign government since his appointment.

“Discussed continued cooperation for economic recovery and stability in Sri Lanka through democratic processes,” the Indian High Commission in Colombo said in a tweet.

New Delhi is battling China for influence in strategically important Sri Lanka, which lies on key shipping lanes between Asia and Europe and is home to major infrastructure projects financed by both countries.

Protesters said the appointment of Wickremesinghe will do little to ease the anger against the president, who they say is ultimately responsible for the worst economic crisis to hit the nation since it became independent in 1948.

Buffeted hard by the pandemic, rising oil prices and populist tax cuts by the Gotabaya brothers, Sri Lanka is critically low on foreign exchange, and rampant inflation and fuel shortages have brought thousands onto the street in a month of protests that had remained predominantly peaceful until this week. – Rappler.com