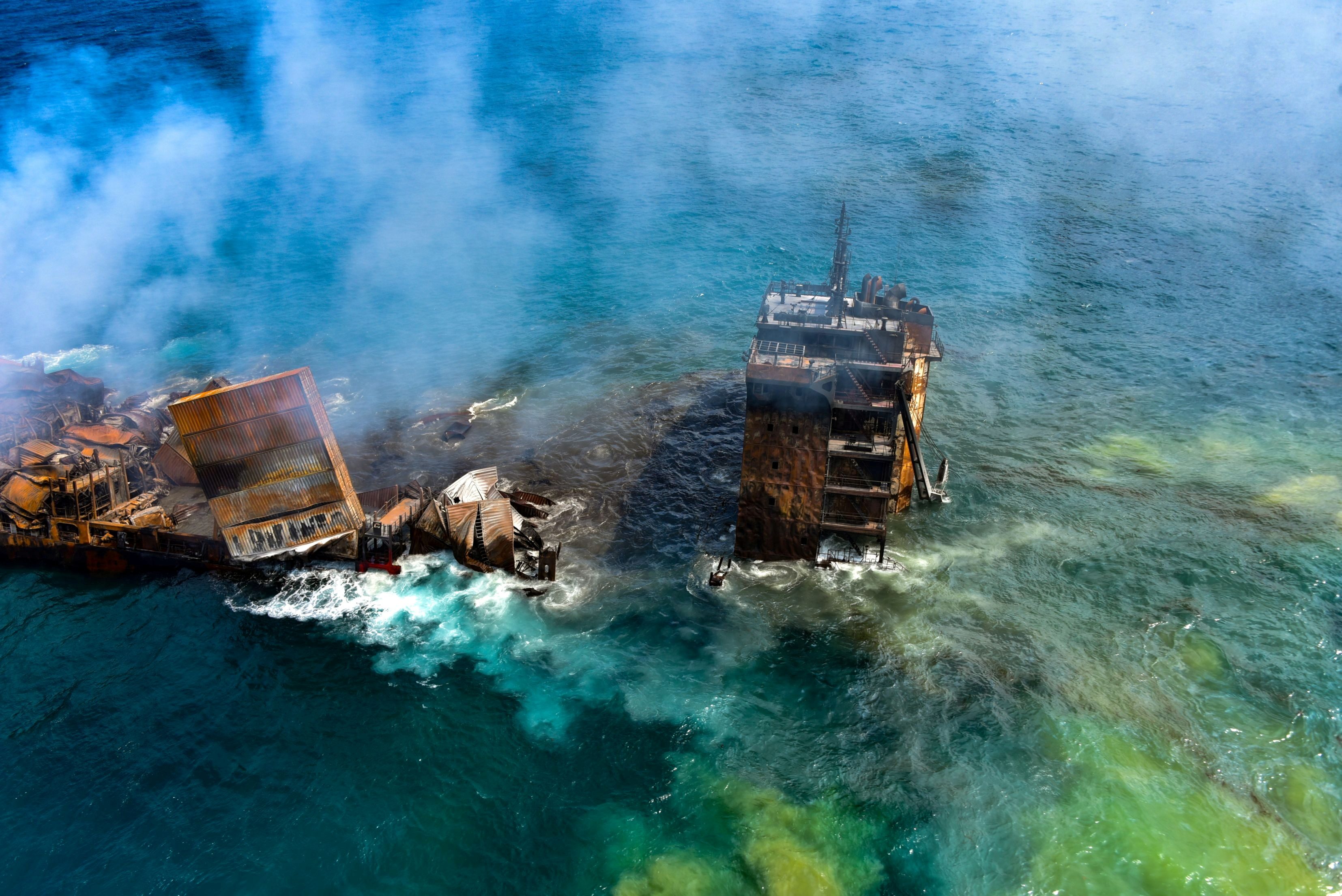 SPILL. Smoke rises from a fire onboard the MV X-Press Pearl vessel as it sinks while being towed into deep sea off the Colombo Harbor, in Sri Lanka on June 2, 2021.

Facebook Twitter Copy URL
Copied
The ship's operators, X-Press Feeders, say there are still no signs of a fuel oil spill from the ship, and that much of the toxic cargo have been incinerated in the fire

Sri Lanka on Thursday, June 3, readied for the possibility of an oil spill after a cargo ship laden with chemicals sank off its western coast.

The Singapore-registered MV X-Press Pearl, carrying 1,486 containers, including 25 tonnes of nitric acid along with other chemicals and cosmetics, was anchored off the port city of Negombo when a fire erupted onboard after an explosion on May 20.

Flaming containers filled with chemicals tumbled into the sea from the ship’s deck as emergency crews sought to contain the blaze over the ensuing two weeks.

The craft began to sink early on Wednesday, June 2, and a salvage crew tried to tow the vessel to deeper water, away from the coast, but the attempt was abandoned after the rear of the ship touched the sea bed.

The ship’s operators, X-Press Feeders, said in a statement on Thursday there were still no signs of a fuel oil spill from the ship, and that much of the toxic cargo had been incinerated in the fire.

“Salvors remain on scene to deal with any possible debris supported by the Sri Lankan Navy and the Indian Coast Guard, who have oil spill response capabilities on standby,” the statement said.

But photos from the country’s coast guard showed a layer of green film blanketing the ocean surrounding the vessel, and millions of plastic pellets have already fouled surrounding beaches and fishing grounds, forcing the government to ban fishing along an 80-kilometer stretch of coast.

The government has said it would seek redress for the incident.

“We hope to get compensation in accordance with local and international law. We will never give up on that effort,” Minister for ports and ports development Rohitha Abeygunewardene told a news conference late on Wednesday. “We will calculate the cost from the beginning of this incident and claim compensation.”

Singapore authorities said on Thursday they have started their own investigation into the incident. – Rappler.com