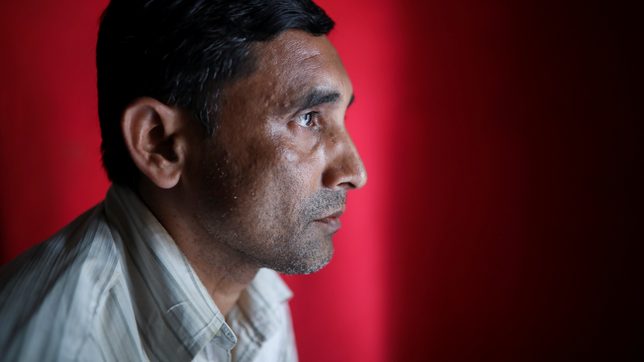 REST IN PEACE. Mohib Ullah, a Rohingya Muslim leader from the Arakan Rohingya Society for Peace and Human Rights, poses for a potrait at his office in Kutupalong refugee camp in Ukhiya, Cox’s Bazar, Bangladesh, on April 19, 2018..

Facebook Twitter Copy URL
Copied
Mohib Ullah, chair of the Arakan Rohingya Society for Peace and Human Rights, was gunned down at a refugee camp

The United Nations denounced the killing of prominent Rohingya Muslim leader Mohib Ullah in a refugee camp in southern Bangladesh.

In a press conference past midnight (Manila time) on Friday, October 1, associate spokesperson Stephanie Tremblay said the UN is calling on the Bangladesh government to conduct a thorough probe into Ullah’s murder.

“The UN strongly condemns the killing of Rohingya refugee leader Mohib Ullah in Cox’s Bazar, Bangladesh yesterday. The UN urges the Bangladesh authorities to undertake an investigation and to hold those responsible to account,” Tremblay said.

The UN called for “continued strong international support” for the protection of Rohingya communities across the world.

The UN Refugee Agency likewise expressed its “deep shock and sadness” at the killing of Ullah.

Unidentified gunmen shot and killed Ullah on Wednesday, September 29, while he was speaking to community leaders outside his office in Cox’s Bazar.

He was one of the most high-profile advocates for the Rohingya, a Muslim minority that has faced persecution for generations.

Ullah, who was in his late 40s, led one of the largest of several community groups to emerge since more than 730,000 Rohingya Muslims fled Myanmar after a military crackdown in August 2017.

He was the chair of the Arakan Rohingya Society for Peace and Human Rights, which made its name documenting atrocities the Rohingya suffered during the Myanmar crackdown.

Suu Kyi is now among the political prisoners in Myanmar after the military takeover in February. – with reports from Reuters/Rappler.com