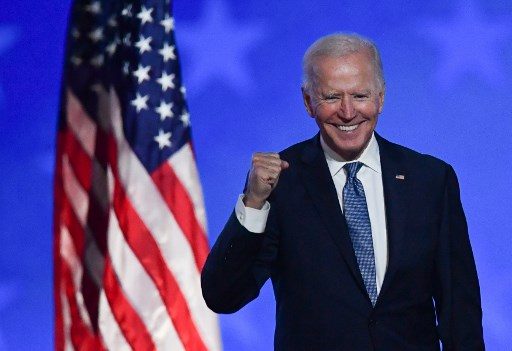 Democratic presidential nominee Joe Biden gestures after speaking during election night at the Chase Center in Wilmington, Delaware, early on November 4, 2020. - Democrat Joe Biden said early Wednesday he believes he is "on track" to defeating US President Donald Trump, and called for Americans to have patience with vote-counting as several swing states remain up in the air. "We believe we are on track to win this election," Biden told supporters in nationally broadcast remarks delivered in his home city of Wilmington, Delaware, adding: "It ain't over until every vote is counted." (Photo by ANGELA WEISS / AFP)

Facebook Twitter Copy URL
Copied
'The trajectory of this race has turned in a decisive way,' remarks CNN's John King

Democrat Joe Biden has taken the lead in key battleground state Pennsylvania, where a victory for the former vice president would push him past the threshold of electoral votes needed to win the White House, US media said Thursday, November 5 (Friday, November 6, Manila time).

More ballots are yet to be counted, but shortly before 1400 GMT, CNN and The New York Times reported that Biden had moved ahead of incumbent President Donald Trump.

CNN announced Biden has pulled ahead of Trump in Pennsylvania by 5,587 votes. In the last update that came from Philadelphia, Biden gained 27,396 votes and Trump, 3,760.

Biden currently has at least 253 electoral votes. The magic number is 270. If he wins Pennsylvania – a state won by Trump in 2016 – and its 20 electoral votes, he would pass that threshold.

Biden is also currently in the lead in key states Georgia and Nevada.

“The trajectory of this race has turned in a decisive way,” CNN’s John King said. – with reports from Sofia Tomacruz and Agence France-Presse/Rappler.com