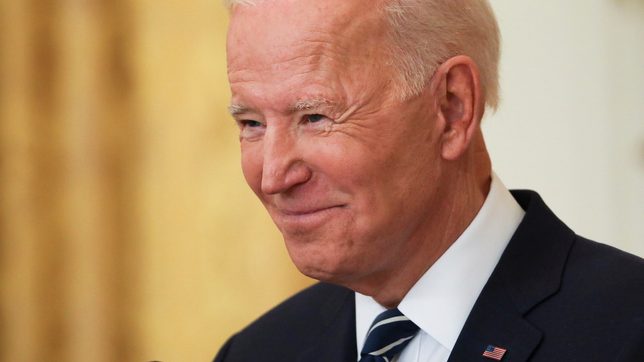 GRIN. US President Joe Biden listens to a question as he holds his first formal news conference as president in the East Room of the White House in Washington, DC, March 25, 2021.

US President Joe Biden said on Thursday, March 25, he plans to run for re-election in 2024.

Biden, 78, is the oldest person to take office as president in US history and there has been speculation that he would serve only one four-year term.

“My plan is to run for re-election. That’s my expectation,” Biden told reporters at the White House.

Biden then went on to offer a bit of a hedge. Asked again about the issue, he said: “I’ve never been able to plan four-and-a-half, three-and-a-half years ahead for certain.”

Biden also said he fully expected that Vice President Kamala Harris would remain on the ticket with him.

It is unusual to focus on running for re–election so early in a presidential term, but Biden’s age and the possibility that his predecessor, Republican Donald Trump, may run again, have created early speculation about the 2024 presidential field. Biden had previously described himself as a transition figure. But had he said on Thursday that he did not plan to run again, it could have immediately made him into a kind of political lame duck at the very beginning of his presidency.

Trump took steps to start his own re-election campaign early on in 2017 shortly after taking office.

He has not said whether he plans to run again in 2024, preferring to keep fellow Republicans – some of whom are preparing to run themselves – guessing.

Biden said he had no idea if Trump would be his opponent in the next election.

“Oh come on,” he said when asked about that, questioning what the Republican Party would even look like in the coming years.

Trump disputed the results of the November election and skipped Biden’s inauguration. – Rappler.com