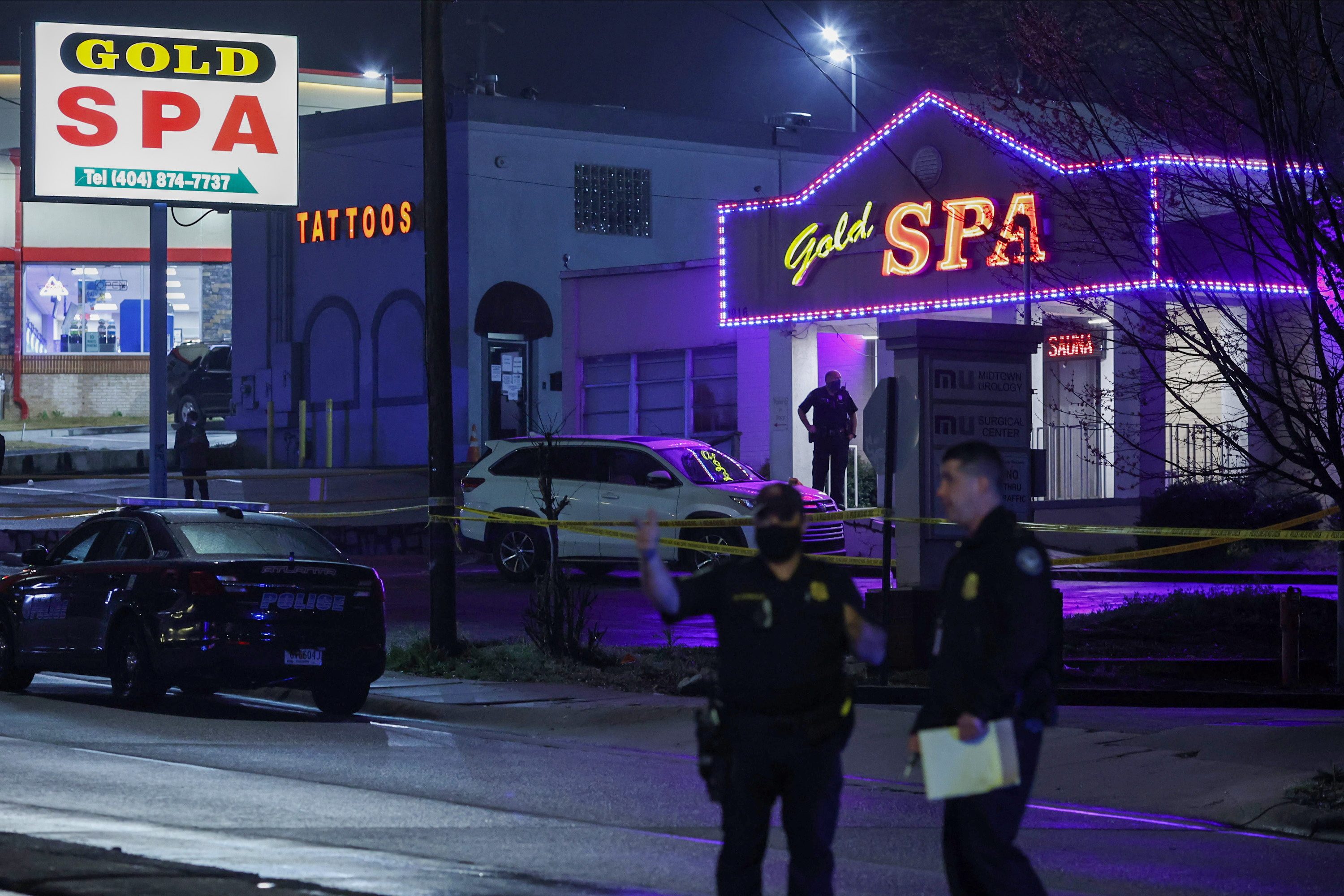 SCENE OF THE CRIME. City of Atlanta police officers are seen outside of Gold Spa after deadly shootings at a massage parlor and two day spas in the Atlanta area, in Atlanta, Georgia, US, on March 16, 2021.

Eight people, six of them women of Asian descent, were shot dead in a string of attacks at day spas in and around Atlanta, and a man suspected of carrying out the killings was in custody on Wednesday, March 17, in southern Georgia, police said.

Although authorities in the southern US state declined to offer a motive for the violence, the attacks on Tuesday, March 16, prompted the New York Police Department’s counter-terrorism unit to announce the deployment of additional patrols in Asian communities there as a precaution.

South Korea’s foreign ministry said its consulate-general in Atlanta had confirmed that the victims included four women of Korean descent but was verifying their nationality.

It was the latest instance of gun violence involving numerous deaths in the United States. Authorities said it was not determined whether the victims were targeted because of their race or ethnicity.

Robert Aaron Long, 21, of Woodstock in Cherokee County, was taken into custody in Crisp County, about 150 miles (240 km) south of Atlanta. A photo of Long, who is white, was released by authorities.

The bloodshed began about 5 pm on Tuesday when four people were killed and another was wounded in a shooting at Young’s Asian Massage in Cherokee County, about 40 miles (64 km) north of Atlanta, Captain Jay Baker of the Cherokee County Sheriff’s Department said.

Two women of Asian descent were among the dead there, along with a white woman and a white man, Baker said, adding that the surviving victim was a Hispanic man.

While investigating the initial report, the officers were called to a separate aromatherapy spa across the street where another woman was found dead from a gunshot wound, Bryant said. All four women killed in Atlanta were of Asian descent.

US Secretary of State Antony Blinken, who was visiting South Korea on Wednesday, offered his condolences.

“We are horrified by this violence which has no place in America or anywhere,” Blinken told South Korean Foreign Minister Chung Eui-yong.

The violence unfolded days after US President Joe Biden used a nationally televised speech to condemn a surge in hate crimes and discrimination against Asian-Americans. Civil rights groups have accused former President Donald Trump of contributing to the trend by referring to the coronavirus as the “China virus” and “China plague” because the pathogen first emerged there.

US Attorney General Merrick Garland was also briefed on the events, according to a Justice Department official.

Baker told Reuters that investigators were “very confident” that the same suspect was the gunman in all three shootings. The Atlanta Police Department said the suspect was connected to all the attacks by video evidence from the crime scenes.

Long was spotted in southern Georgia, far from the crime scenes, after police in Cherokee County issued a bulletin providing a description and license plates of the vehicle involved in the attacks, Baker said.

He was arrested without incident after a highway pursuit by Georgia state police and Crisp County Sheriff’s deputies, sheriff’s officials said later.

The New York Police Department’s counter-terrorism branch said on Twitter that although there was no known connection to New York City, the department “will be deploying assets to our great Asian communities across the city out of an abundance of caution.”

Atlanta police said they were stepping up patrols around businesses similar to those attacked on Tuesday.

Gun control is a divisive issue in the United States, which enshrines the right to bear arms in the Constitution. The US House of Representatives last week approved a pair of gun control bills as Democrats seized upon a shifting political landscape that they said improved chances for enacting new laws after years of failed attempts. – Rappler.com