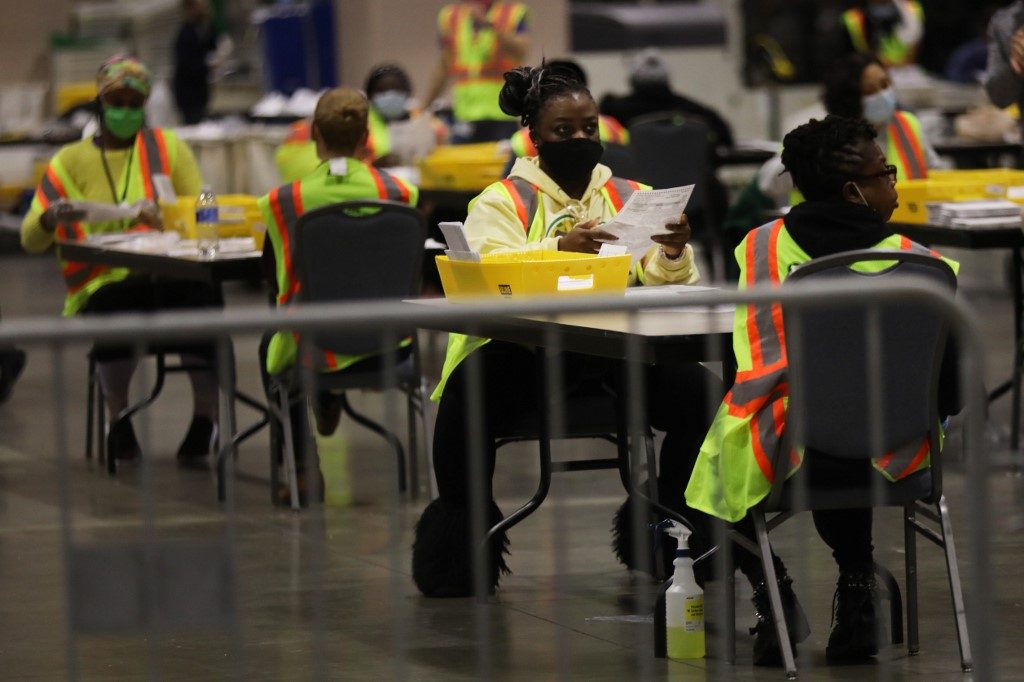 Facebook Twitter Copy URL
Copied
'We're going to be OK. We're going to continue to count. We will not allow anyone to stop us from doing what our duty is in counting ballots,' says Joe Gloria, registrar of voters for Clark County

If it were at another time, what they were doing could seem like nothing much, maybe office sorting of some kind.

But the stakes could not have been higher on Thursday, November 5, as workers in masks and gloves stood over folding tables to verify and count, one by one, the remaining ballots in the yet to be decided US presidential election.

The world was watching – and so, of course, were the campaign teams for President Donald Trump and Democratic challenger Joe Biden along with their teams of lawyers.

Huge numbers of journalists from around the world were gathered, staking out space to record what will be a historic moment.

There was often not much to see – just workers going about their task, sure and steady, dressed casually, sometimes with lanyards and IDs around their necks.

They made their way through a mountain of mailed ballots, the preferred method for many voters this year due to the coronavirus pandemic, checking their validity then sorting and running them through counting machines.

The number of mailed ballots was the reason there were repeated warnings ahead of Tuesday’s election that the process could take longer this year and will require patience – a prediction that proved accurate.

In some cities, such as Philadelphia, protesters gathered outside counting centers and Trump’s team pressed for greater access, seeking, without evidence, to sow further doubt on the process as Biden moved to the cusp of gaining enough electoral votes for victory.

There were a handful of protesters during the day on Thursday in Atlanta, Georgia, a major city in the American south and one with a proud history of African-American activism as the birthplace of Martin Luther King Jr.

Georgia unexpectedly became an epicenter of attention after Biden performed surprisingly well in the Republican stronghold, making a serious run at its 16 electoral votes.

Should he overtake Trump in the remaining ballots, he would become the first Democratic nominee for president to win the state since Bill Clinton in 1992.

Nevertheless, there was a relaxed, almost mundane atmosphere as counters focused on the job at the arena that is usually the home of the Atlanta Hawks NBA basketball team.

Officials defended workers against attempts to cast a cloud over the process.

Gabriel Sterling of the Georgia secretary of state’s office, which oversees the organization of elections, spoke of the small margin between the two candidates in his state and said “we are aware of that fact.”

“And the county elections officials feel that pressure. They understand. They are working hard,” he said at the state capitol.

“My hats are off to them having to go through this process and be under this level of scrutiny.”

Sterling said early Thursday that about 60,000 votes remained to be counted. 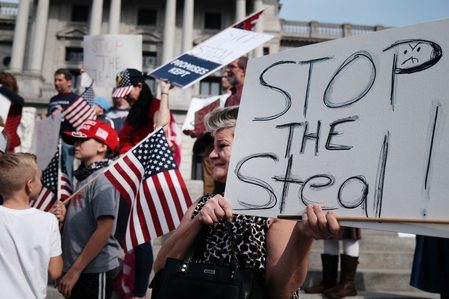 On the other side of the country in the Las Vegas area – more often known as the country’s gambling mecca – gloved workers separated by glass dividers fed ballots through counting machines, one of a series of steps in the process of verifying and tabulating the votes.

There were also few protesters on Thursday there, which is located in Nevada, another state that remained too close to call two days after the election.

Joe Gloria, registrar of voters for Clark County, which includes Las Vegas, seemed somewhat harried as he explained to journalists the work that remained, speaking through a mask.

But there was also a reminder that while the counting can seem drab and boring, there are heavy tensions underlying it.

Gloria was asked about protests on Wednesday night and if he felt safe.

“I can tell you that my wife and my mother are very concerned for me, but we have security here,” he said.

“I feel safe. We’re going to be OK. We’re going to continue to count. We will not allow anyone to stop us from doing what our duty is in counting ballots.” – Rappler.com