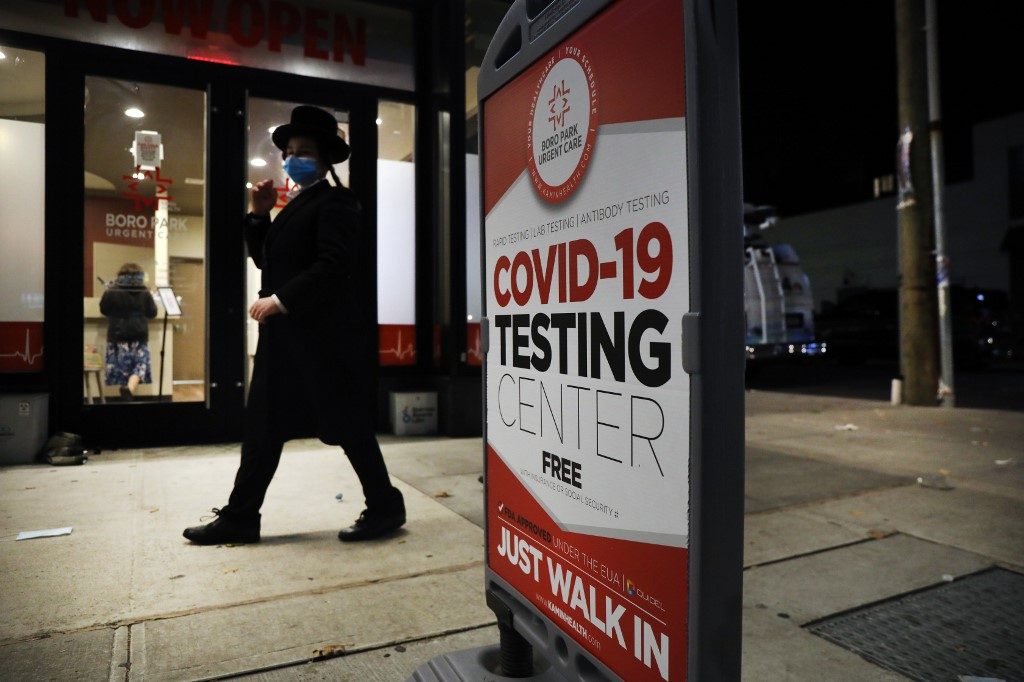 MASKS AND TESTS. A COVID-19 testing site stands in the Brooklyn neighborhood of Borough Park on October 07, 2020 in New York City. Photo by Spencer Platt/Getty Images/AFP

Facebook Twitter Copy URL
Copied
Near-universal mask wearing over the coming months could reduce projected US virus deaths by nearly 130,000, researchers from the COVID-19 forecasting team at the Institute for Health Metrics and Evaluation (IHME) find

Even if state-level governments in the United States reimpose limited social distancing measures to halt the spread of Covid-19, the death toll could more than double by the end of February 2021 to 511,000, according to projections released Friday, October 23.

Near-universal mask wearing over the coming months could reduce that grim tally by nearly 130,000, researchers from the Covid-19 forecasting team at the Institute for Health Metrics and Evaluation (IHME) found.

Even if mask compliance was only 85%, the number of lives saved compared to that baseline would still top 95,000, they reported in the peer-reviewed journal Nature Medicine.

“There is now growing evidence that face masks can considerably reduce the transmission of respiratory viruses like SARS-CoV-2, thereby limiting the spread of COVID-19,” the authors noted.

The US national average of self-reported mask use was nearly 50% as of September – despite mixed messages from some politicians on their efficacy.

Donald Trump has shunned mask use in public, and has mocked his rival for the White House, Joe Biden, for his consistent wearing of them.

Few of Trump’s followers cover their faces at his campaign rallies, which resumed after the president recovered from a bout with the virus earlier this month.

Since the first confirmed case on US soil of COVID-19 in January 2020, the virus has infected some 8.4 million people across the nation and claimed more than 223,000 lives.

Today, a second – and in some locations third – wave of infection is rising as winter sets in, with the total number of new cases in the US topping 75,000 on October 22, nearly double the daily increase from a month earlier.

In the absence of a vaccine and with few options for treatment, non-pharmaceutical measures such as mask wearing, social distancing, self-isolation, and contact tracing are by default the most effective tools available to curb the disease’s spread.

Most experts agree that, at best, an effective vaccine in not likely to be approved and available until well into next year.

To map what the near-term future might hold, IHME epidemiologists and modelers designed 3 possible scenarios for the United States, extending out to the end of February.

In the first, states continue to remove whatever restrictions on movement and social interaction are still in place, leading to more extensive contact among people.

In this unlikely scenario, they predict, total COVID-19 deaths could top one million by that date.

At least 152 million people – 45 percent of the entire population – are forecast to be infected with the virus, which provokes mild or no symptoms in most cases.

But it is more realistic to expect that states will reimpose measures adopted during the first wave, including closing schools, restricting the size of public gatherings, and the partial or full closure of non-essential businesses.

The study shows that these and similar measures were often triggered when daily death rates in a given locality or state passed eight deaths per million of population.

That threshold will be crossed in 45 of 50 states by late February, according to the new findings.

Even with a new round of social distancing mandates, the COVID-19 death toll is projected to surpass 511,000 by March 1 in this second “reference” model, with a total of nearly 72 million infections.

The study goes on to estimate the impact if at least 95% of the US adult population wore masks.