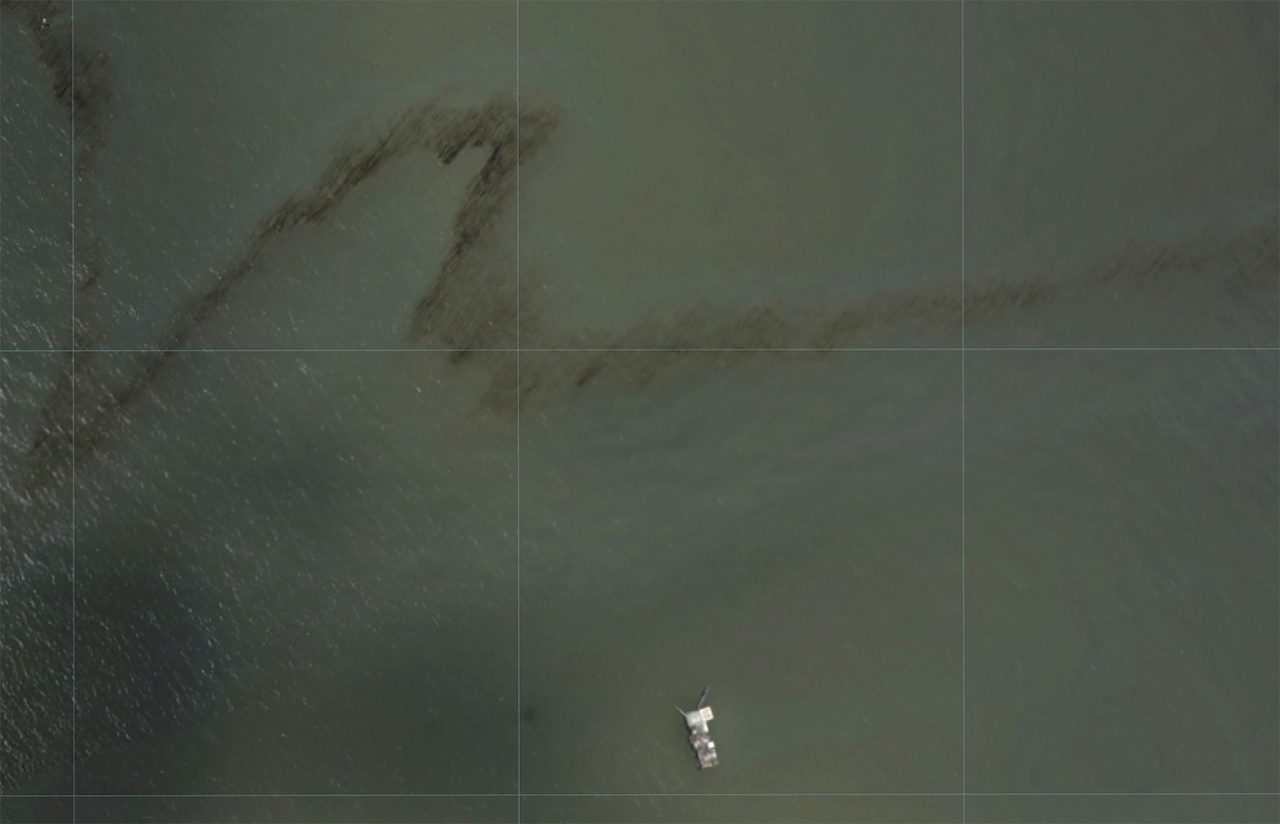 OIL SPILL? A dark trail appears on the waters of the Gulf of Mexico near an oil industry platform, following the passing of Hurricane Ida in an NOAA surveillance photograph taken south of Port Fouchon, Louisiana, US August 31, 2021.

Facebook Twitter Copy URL
Copied
A private dive team will try to locate the source of the slick spotted about two miles off Port Fourchon, Louisiana

A private dive team will try to locate the source of a suspected oil spill spotted in the Bay Marchand area of the Gulf of Mexico on Sunday, September 5, after Hurricane Ida wreaked havoc in the region this week, the US Coast Guard said on Saturday.

The images appeared to show the slick drifting more than a dozen miles (19 kilometers) eastward along the Gulf coast, the AP said.

Ida, one of the most powerful hurricanes ever to strike the US Gulf Coast, hit Louisiana about a week ago before moving northeast and causing intense flooding that killed dozens in New York and other northeastern states.

A Coast Guard spokesman said Talos Energy had hired Clean Gulf Associates to respond to the suspected spill and contracted the private dive team to locate the source of the slick.

The AP quoted the energy company as saying it believes it is not responsible for the oil in the water.

Members of the Coast Guard Marine Safety Unit’s prevention department and the Gulf Strike Team were monitoring reports and NOAA satellite imagery to determine the scope of the discharge, the spokesman said.

Once the source had been identified, the Coast Guard and partnering agencies would work on a recovery and source control plan, he added.

He said Clean Gulf Associates has put skimmers and a containment boom in the area to mitigate any further environmental impact.

The Bay Marchand spill was one of several reported environmental hazards that authorities were responding to in Louisiana and the Gulf following Hurricane Ida.

The US Environmental Protection Agency said on Thursday it had dispatched a surveillance aircraft to an area in Louisiana hard hit by Ida that includes a refinery where an apparent oil spill was reported.

The aircraft dispatched from Texas was going to gather data on a Phillips 66 refinery and other priority sites.

Phillips 66 had said flooding had occurred at its Alliance Refinery and a sheen of unknown origin in some flooded areas of the refinery had been discovered.

US Gulf Coast energy companies on Saturday got a boost from the reopening of ports and restart of oil refineries shut by Ida, but damage to key facilities still crimped oil production. – Rappler.com