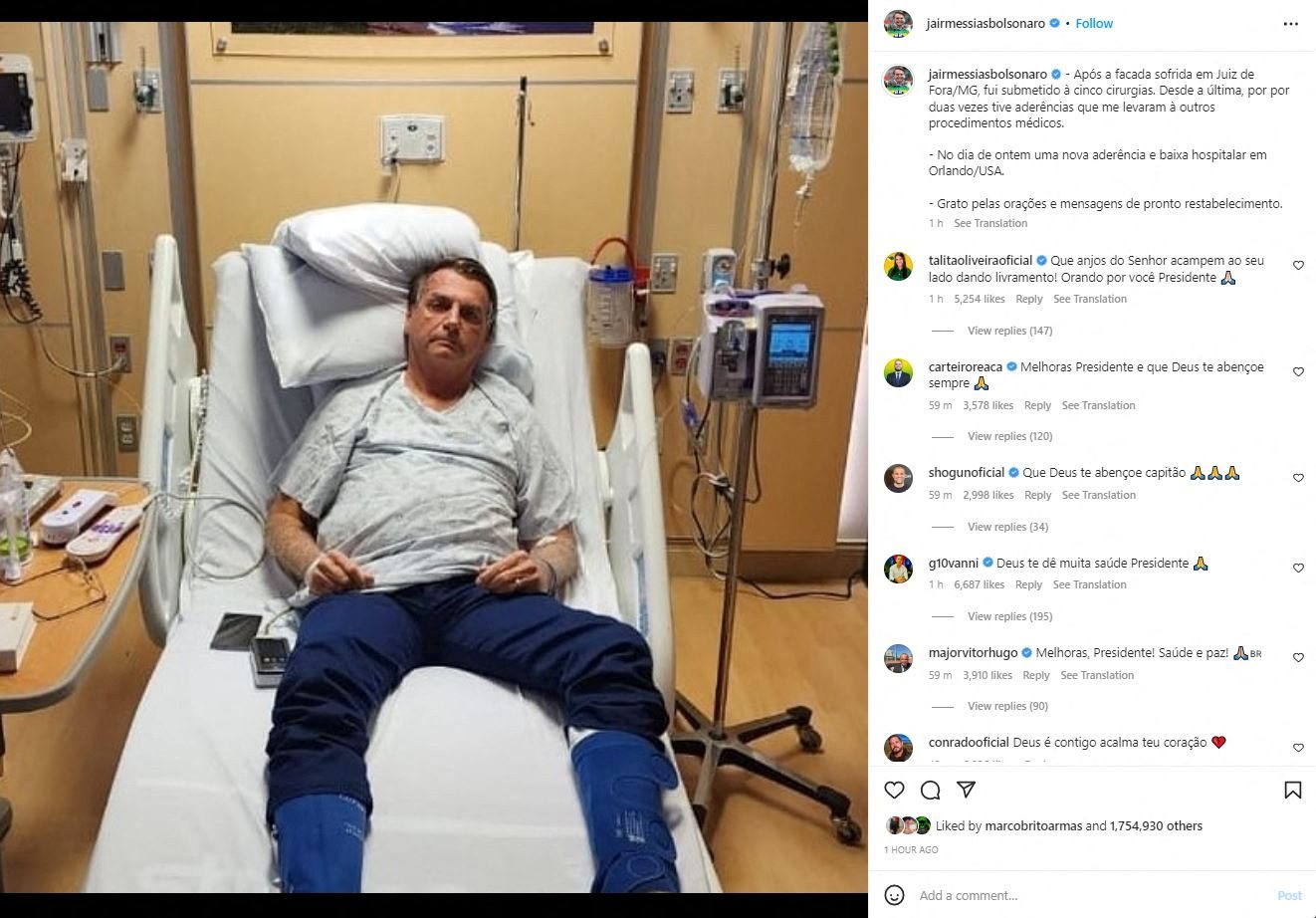 BOLSONARO. A screen grab of an image posted on Instagram shows Brazil's former President Jair Bolsonaro on a hospital bed at an unspecified location in this picture released January 9, 2023 and obtained from social media.

After watching supporters of former US leader Donald Trump storm the US Capitol two years ago, Democratic President Joe Biden is now facing mounting pressure to remove Bolsonaro from his self-imposed exile in suburban Orlando.

The White House said on Monday it had yet to receive any requests from the Brazilian government regarding Bolsonaro’s status, but the former Brazilian president’s presence on US soil has put Biden in a corner, with few good options.

By letting him stay, Biden invites criticism that the United States is harboring a man accused by his successor of fomenting anti-democratic violence. But forcing out the former president of an allied state who entered the country in good faith with a top-tier visa poses awkward questions about due process.

“Bolsonaro should not be in Florida,” US Representative Joaquin Castro, a Democratic lawmaker in Congress, said on CNN on Sunday. “The United States should not be a refuge for this authoritarian who has inspired domestic terrorism in Brazil. He should be sent back to Brazil.”

Alexandria Ocasio-Cortez, another Democrat in the US House of Representatives, echoed those views.

“The US must cease granting refuge to Bolsonaro in Florida,” she tweeted on Sunday.

Bolsonaro had a fractious relationship with Biden, and was already on weaker ground back home in Brazil after losing broad protections from prosecution when he stepped down as president. Those probes could lead to his arrest or prevent him from running for office, Reuters reported last week.

In Washington, a person familiar with the matter said there would likely be no decision on Bolsonaro’s visa status until there is a clearer picture of what happened.

John Feeley, who was the US ambassador to Panama from late 2015 to 2018 when the Central American nation sought the extradition of its former President Ricardo Martinelli, said the most immediate threat to Bolsonaro would come if his US visa were revoked.

“The United States – or any sovereign nation for that matter – may remove a foreigner, even one who entered legally on a visa, for any reason,” Feeley said. “It’s a purely sovereign decision for which no legal justification is required.”

Martinelli was extradited from the United States back to Panama in 2018, three years after Panama’s Supreme Court issued an arrest warrant for him.

Three US sources said Bolsonaro had almost certainly entered on an A-1 visa, which are reserved for heads of state, diplomats and other government officials.

Normally the A-1 is canceled after the recipient leaves office. But with Bolsonaro having left Brazil before his term ended, they suspected his A-1 was still active.

One of the officials, who has experience with the cancellation of visas for former heads of state, said there is no set time limit on how long someone can stay in the United States on an A-1.

In response to Reuters questions, State Department spokesperson Ned Price said anyone in the United States on an A-1 visa no longer engaged in official business must depart the country within 30 days, or apply for a change of immigration status. Price said he could not comment on an individual’s visa status, but was speaking in general terms about visa rules.

“If an individual has no basis on which to be in the United States, an individual is subject to removal by the Department of Homeland Security,” Price said.

Bolsonaro was hospitalized in Florida on Monday due to gut pains related to a 2018 stabbing, his wife said on social media.

He told CNN Brasil that he intended to cut short his US stay due to the medical issues, according to a report published on the outlet’s website, adding that the trip was originally planned through the end of the month.

However, a swift return to Brazil could pose risks for Bolsonaro, who is accused of instigating a violent election denial movement in his home country.

Lula, who pledged in his January 1 inauguration speech to go after Bolsonaro if needed, blamed his predecessor for Sunday’s violence.

In a tweet on Sunday, Bolsonaro rejected Lula’s accusations and said the invasion had crossed the line of peaceful protest.

If Moraes were to sign an arrest warrant while Bolsonaro is in the United States, the former president would be technically required to fly back to Brazil and hand himself over to police. If he refused, Brazil could issue an Interpol Red Notice to prompt his arrest by U.S. federal agents.

If Bolsonaro were detained, Brazil would have to seek his extradition, which could take years to play out. – Rappler.com