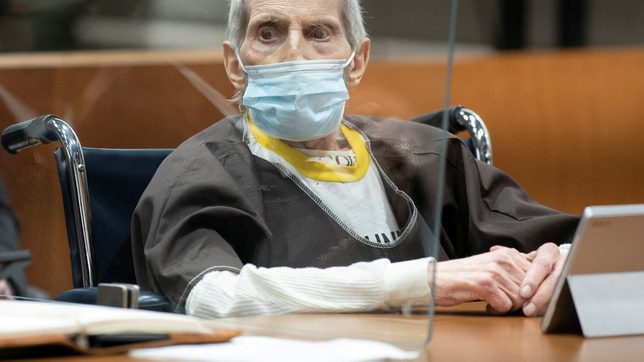 ROBERT DURST. Robert Durst appears in court as he was sentenced to life without possibility of parole for the killing of Susan Berman, at Airport Courthouse, in Los Angeles, California, U.S., October 14, 2021.

Durst, 78, was charged by a Westchester County grand jury in an indictment on November 1, with murder in the second degree, having previously been charged in a complaint filed on October 19, the attorney’s office said in a statement.

The charge comes after Durst was sentenced in October to life in prison in California for murdering his best friend in 2000.

Durst was transferred to a state prison medical unit last week less than two weeks after being hospitalized on a ventilator with COVID-19, media reports said.

Durst is the grandson of the founder of The Durst Organization, one of New York City’s premier real estate companies.

He long ago left the company, now run by his estranged brother Douglas Durst.

“When Kathleen Durst disappeared on Jan. 31, 1982, her family and friends were left with pain, anguish and questions that have contributed to their unfaltering pursuit of justice for the last 39 years,” the Westchester County District Attorney said on Monday. – Rappler.com