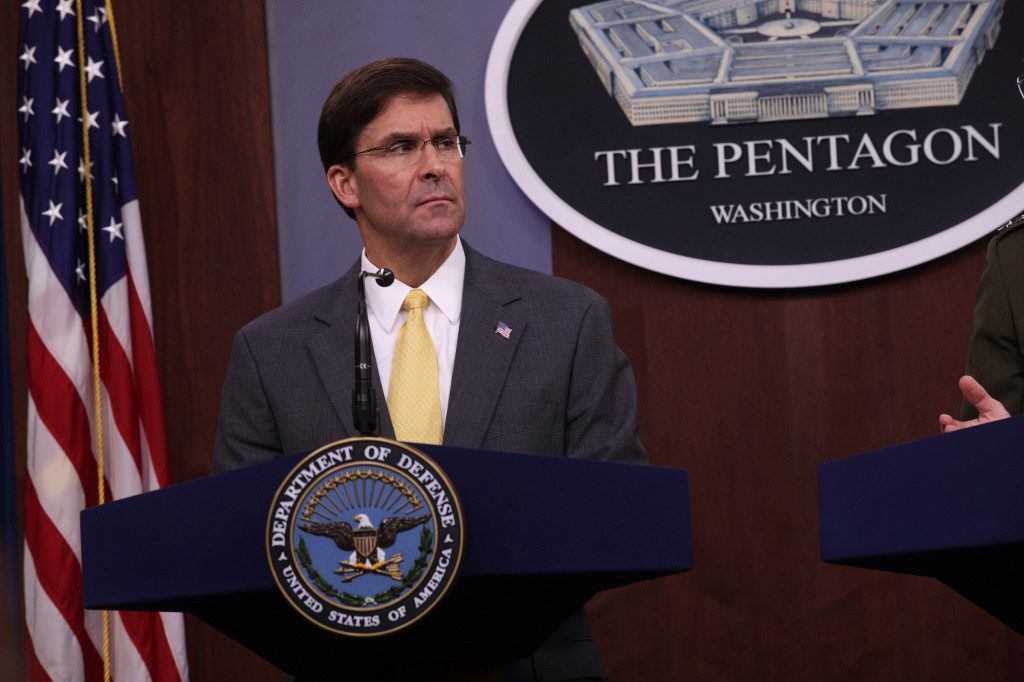 MARK ESPER. In this file photo, US Secretary of Defense Mark Esper holds a media briefing at the Pentagon on August 28, 2019, in Arlington, Virginia

The move came with just 10 weeks left in Trump’s White House tenure, capping a stormy four-year relationship with the Pentagon that has seen him go through 4 defense chiefs, in part because they would not serve his political goals.

Like his predecessors Esper had sought to fly below the political radar to avoid Trump’s ire.

But they ultimately collided over White House pressure to deploy federal troops to quash civil unrest, and Trump’s desire for a rapid withdrawal of US troops from Afghanistan before the defense establishment felt it was safe.

“Mark Esper has been terminated,” Trump declared abruptly on Twitter.

“I would like to thank him for his service.”

Keeping his head down

While not surprised, Democrats blasted Trump for destabilizing the transition between administrations.

Top Democrat Nancy Pelosi called Esper’s firing “disturbing evidence that President Trump is intent on using his final days in office to sow chaos in our American Democracy and around the world.”

“Again and again, Trump’s recklessness endangers our national security,” added the speaker of the House of Representatives in a statement.

Miller is a retired 31-year army veteran who deployed in Afghanistan in 2001 and Iraq in 2003 with the special forces, was Trump’s White House advisor on counterterrorism, and from January to August 2020, deputy assistant secretary of defense for special operations.

Esper, 56, was fired after 16 months in the job trying to keep his head down politically as he pursued fundamental reforms to the massive Pentagon bureaucracy and sought to reshape the US defense posture to focus on China.

A West Point classmate of Secretary of State Mike Pompeo, Esper worked years in the Pentagon bureaucracy and defense industry.

He became defense secretary in July 2019, 7 months and two interim replacements after Trump sacked Jim Mattis, who also endured a tortured relationship with the White House.

Esper accommodated some of Trump’s wishes as he completed a strategic review of the US presence worldwide, tried to modernize weapons programs, deal with the COVID-19 outbreak and confront racism in the military.

When Congress would not fund a Mexico border wall, Esper moved billions of dollars from weapons and base maintenance programs for wall construction to assuage Trump.

He also sharply cut US forces in Syria as Trump sought to live up to his 2016 election pledge to bring back troops from overseas.

And after the February 29 US-Taliban peace deal, he slashed US troop levels in Afghanistan from more than 13,000 at the time to around 4,500 this month.

But even as he skirted controversy, he could not avoid colliding with the commander in chief.

After sometimes violent anti-racism protests spread across the country following the May police killing of George Floyd in Minneapolis, Trump sought support from the Pentagon for deploying regular troops.

In a televised move, Trump drew an unknowing Esper and Joint Chiefs Chairman General Mark Milley to his side, when he used guardsmen to forcefully clear peaceful protesters from a park near the White House for a photo opportunity.

Under heavy criticism, days later Esper and Milley backed away, saying active troops should not be used for domestic politics. Milley said their presence at the White House had been wrong.

Trump was reportedly furious, and later publicly demeaned the Pentagon chief as “Yesper.”

More tension came in June when Trump announced, reportedly without informing Esper, that he would halve the number of US troops in Germany,

And then Esper held his line against a near-full unilateral drawdown in Afghanistan.

Even as the Kabul government and the Taliban rebels struggle to make headway in their peace talks, Trump National Security advisor Robert O’Brien said in mid-October that US force levels would fall to about 2,500 by February.

Trump added that he wanted the troops home “by Christmas” or December 25.

But Esper stuck to the minimum of 4,500 troops from end-November, until the Taliban follow through on pledged reductions in violence.

Unlike Pompeo, Esper didn’t help his own case by refraining from promoting his boss on the campaign trail.

In an interview last week with Military Times that was held for his removal, he admitted to “occasional tension” with the White House.

But he said he had defended the Pentagon as an institution while “preserving my integrity in the process.”

“Name another cabinet secretary that’s pushed back,” he said. – Rappler.com