For Trump, a nightmarish weekend of defiance and defeat Facebook Twitter Copy URL
Copied
By Sunday morning, Trump had still not called his Democratic opponent to congratulate him – a long-time tradition

It was the physical reflection of a nightmarish weekend marked by his clear electoral defeat to Joe Biden and by the resounding cheers from the Democrat’s supporters massed outside the White House.

– 8:20 am Saturday: The day began with the wearying tension of a still unresolved race weighing on Americans nationwide. It was the fourth day of waiting for excruciatingly slow-arriving results, and Trump had railed on Twitter against the swelling projections of his defeat. As he has often done, he started the day with a series of angry and defiant tweets, messages immediately flagged as “misleading” by the social media platform.

His last tweet before every major US network declared that he had lost to Biden: “I WON THIS ELECTION, BY A LOT!”

– At 10 am, the presidential motorcade left the White House under a brilliant blue sky, Trump’s first time out of the historic residence since election night, Tuesday.

In dark gray pants, a gray jacket, and a white “Make America Great Again” hat, Trump soon arrived at his golf club across the Potomac River in Sterling, Virginia.

From the side of the road, as the motorcade passed, one person held a sign that might have been seen to augur ill: “Good Riddance.”

The decision to go golfing as America – and the world – remained in agonizing suspense over the election outcome struck many as odd, to say the least.

Photographers were able to take pictures from a distance of the president – a skilled golfer – riding in one of two white golf carts. Afterward, he returned to the clubhouse and posed for photos with a pair of surprised newlyweds. But there were no pictures of the moment he learned that his defeat was being announced around the world.

Meantime, a statement from his campaign that was clearly prepared in advance insisted Trump had won and accused Biden of “rushing to falsely pose as the winner.”

After just over 4 hours at the club in Virginia, Trump’s motorcade headed back – but with a challenge: making its way through the crowds of exultant Washingtonians who had flocked to the streets around the White House to celebrate Biden’s victory, whooping, clapping, and incessantly honking car horns. The White House is in the heart of Washington, a Democratic bastion where Biden took an overwhelming 93% of the vote to just 5% for Trump.

“Pack your bags and go home,” one poster read. Some pedestrians flashed middle fingers as the motorcade moved past.

Outside a side entrance to the White House, Trump, his jaw clenched, acknowledged journalists with a wave of his hand.

On US television networks, Trump – an inveterate TV watcher – would have seen scenes of huge celebratory crowds pouring onto the streets of every big city in the country. Meantime, only a block away on Black Lives Matter Plaza – renamed by Washington officials to show solidarity against police violence – the atmosphere was equally festive.

Later in the evening, Trump again turned to Twitter to channel his anger, saying, “I WON THE ELECTION, GOT 71,000,000 LEGAL VOTES,” before adding in a second tweet, “The most EVER for a sitting president!” But already his messages had lost some of their earlier resonance. 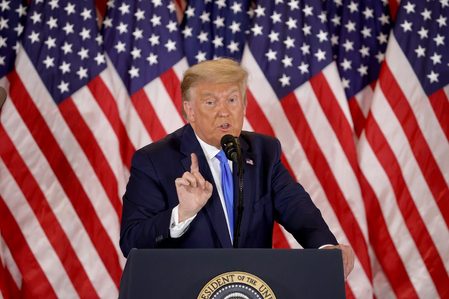 By Sunday morning, Trump had still not called his Democratic opponent to congratulate him – a long-time tradition.

Instead, he repeated the same scenario as Saturday: a series of angry tweets complaining without evidence of vote fraud, and then back to Virginia for more golf.

En route there and back, Trump – who has thrived on supporters’ adulation at the big political rallies he holds around the country – again passed Biden fans brandishing hostile signs along the road.

With no word yet on a Trump concession, the White House has said nothing so far about the president’s plans for the long transition from now until January 20, when Biden will be sworn in as the nation’s 46th president.

The president now appears to have a slowly narrowing circle of key supporters vocally backing him in his insistence on pursuing legal challenges to the election results – challenges given little chance to succeed.

But one of his closest allies, Senator Lindsey Graham, was sticking with Trump, exhorting him early Sunday: “Do not concede, Mr. President.