US attorney general says no evidence of decisive election fraud VOTING. A poll worker walks across the room as a voter looks at their choices on November 3, 2020 in Columbia, South Carolina.

The US attorney general rejected Republican claims of significant voter fraud in the presidential election on Tuesday, December 1, adding to the pressure on President Donald Trump to give up his quixotic effort to overturn Joe Biden’s clear victory.

“To date, we have not seen fraud on a scale that could have effected a different outcome in the election,” Attorney General Bill Barr told the Associated Press in an interview.

Barr’s comments confirmed the conclusions of the Department of Homeland Security, US intelligence, and independent poll watchers that the 2020 election was, in the language of government officials, the “most secure in American history.”

They came as Trump persisted in claiming, without evidence, that fraudulent voting practices and systems in key states like Michigan, Pennsylvania, and Georgia had robbed him of a second term.

In tweets Tuesday afternoon Trump highlighted testimony being offered in a public hearing on the election in Michigan, which has already certified Biden’s win in the state, and a separate Republican-organized event in Virginia.

“People are coming forward like never before. Large truck carrying hundreds of thousands of fraudulent (FAKE) ballots to a voting center? TERRIBLE – SAVE AMERICA!” he wrote.

In several legal filings – all rejected by the courts – the Trump campaign has sought to invalidate millions of votes for Biden based on claims that lacked any evidence.

According to official vote tallies, Biden earned 6.2 million votes more than Trump and captured 306 state-by-state Electoral College votes, well above the 270 needed to win the presidency.

But Trump’s campaign has strived to delay the popular vote tally from being finalized before the Electoral College meets on December 14 to certify the election winner.

His personal and campaign attorneys, led by Rudy Giuliani, have made numerous allegations ranging from ballot-box stuffing and fake ballot printing, to thousands of dead people having voted, to vote-counting machines being programmed to favor Biden.

On November 17 Trump fired Chris Krebs, the respected head of the Cybersecurity and Infrastructure Security Agency, which was responsible for election security and had made the “most secure ever” claim about the November 3 election.

Krebs has since been demonized by the White House, with Trump campaign lawyer Joe DiGenova sparking outrage by calling him a “moron” who should be “taken out at dawn and shot.” 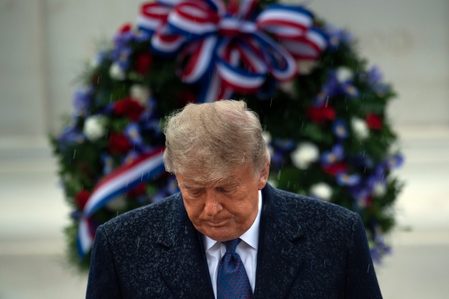 Barr, an ally of Trump, didn’t address specific claims, but dismissed the idea of any “systemic” fraud that would have changed the outcome of the vote.

Any problem for which there has been evidence, Barr noted, would impact an insignificant number of votes.

“There’s been one assertion that would be systemic fraud, and that would be the claim that machines were programmed essentially to skew the election results,” he told the AP.

“And the DHS and DOJ have looked into that, and so far, we haven’t seen anything to substantiate that,” he said, referring to the departments of Homeland Security and Justice.

There was no immediate reaction to Barr from Trump. But in a joint statement Giuliani and Jenna Ellis, a senior legal advisor to the outgoing president’s campaign, dismissed the remarks.

“With all due respect to the attorney general, there hasn’t been any semblance of a Department of Justice investigation,” they said.

“We have gathered ample evidence of illegal voting in at least six states, which they have not examined. We have many witnesses swearing under oath they saw crimes being committed in connection with voter fraud.”

They said they would “continue our pursuit of the truth through the judicial system and state legislatures.”

Barr’s comments were reported about the same time he arrived Tuesday at the White House for unspecified meetings.

Recent news reports have said that Trump is unhappy with Barr for not making efforts to support the president’s reelection.

But, likely pleasing Trump, on Tuesday he revealed that he had named an independent special prosecutor to investigate the Justice Department and FBI investigators who probed links between Trump’s campaign and Russia in the 2016 election.

Trump has claimed that those investigators, including former special counsel Robert Mueller, were part of a corrupt, political “witch hunt” by the “deep state” to undermine his administration. – Rappler.com