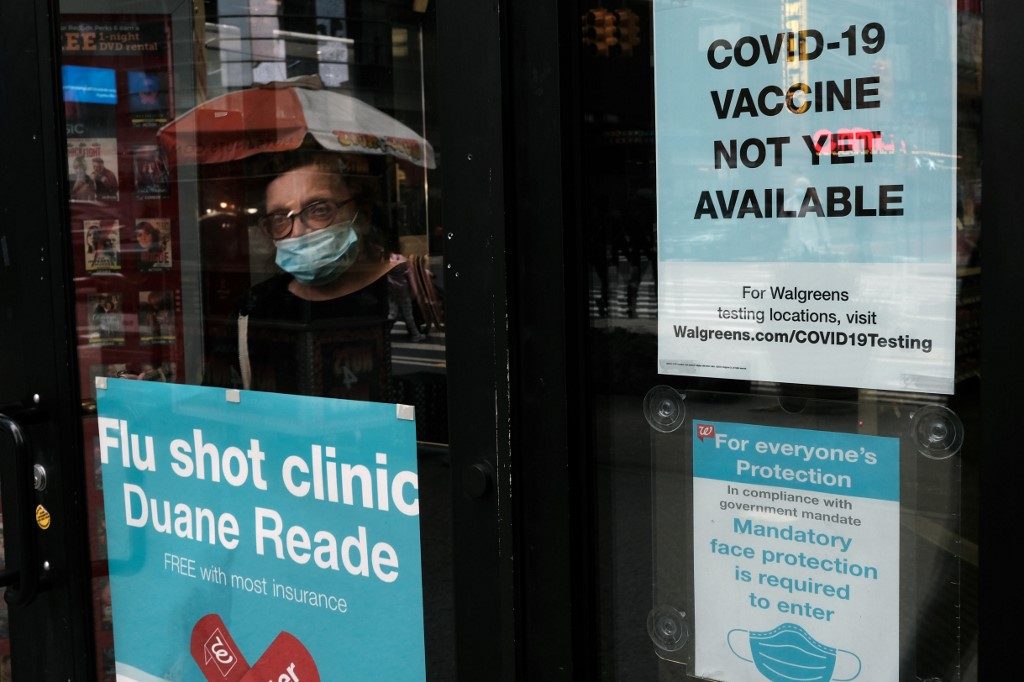 NOT AVAILABLE. A woman walks out of a drugstore in Times Square as New York City tries to contain a spike in COVID-19 cases on November 15, 2020 in New York City.

The US surpassed 11 million coronavirus cases Sunday, November 15, adding one million new cases in less than a week, according to a tally by Johns Hopkins University.

The dizzying rise came as cities and states across the United States were implementing new restrictions to try to halt the spread of the virus, with stay-at-home orders set to be imposed on Chicago Monday.

The US had crossed the 10 million case threshold on Monday, November 9.

There have been 246,108 deaths in the country. Both are the highest tolls in absolute terms in the world.

The US has seen a worrying surge in coronavirus cases since the start of November, forcing local and state officials from coast to coast to take more drastic steps to reduce the disease’s spread, with many hospitals already warning that they are running out of resources.

In addition to the stay-at-home orders in Chicago, the country’s third biggest city, its biggest – New York, the epicenter of the country’s spring outbreak – is also rushing to fend off a second wave with new restrictions on bars and restaurants.

New York schools will remain open Monday, even though New York City mayor Bill de Blasio had warned that they could switch to fully remote learning by then.

President Donald Trump promised Friday that the first Americans would start receiving a vaccine in “a matter of weeks,” but said he remained firmly against new lockdowns – a measure taken in Europe, where cases are also on the upswing.

Further complicating matters is Trump’s refusal to cooperate in the shift to President-elect Joe Biden’s administration, denying the Democrat both federal funding for transition work and vital briefings by outgoing officials.

Democrats and Biden’s chief of staff say this could have a damaging impact on his ability to face the grave and mounting challenges posed by the coronavirus pandemic once he assumes office.

Trump – for a moment – alludes to election defeat Biden and his team currently are not even allowed to consult with experts like top government immunologist Anthony Fauci, who is still a part of the White House COVID-19 task force.

“Of course it would be better” if such talks could begin, Fauci told CNN on Sunday, noting that the virus could kill tens of thousands more Americans by the time Biden takes office on January 20. – Rappler.com